Germany’s biggest hospital is on strike: The Charité, Berlin’s university clinic, employs 13,000 workers. The struggle began this Monday, after 96% of trade union members had voted in favor of strike action. The workers are demanding a better personell ratio. One nurse currently has to deal with up to 14 patients – they are demanding a ratio of one to five, and during the night shifts, they want to have at least two nurses at each station. This is the first time nurses in Germany have gone on strike for more personell. 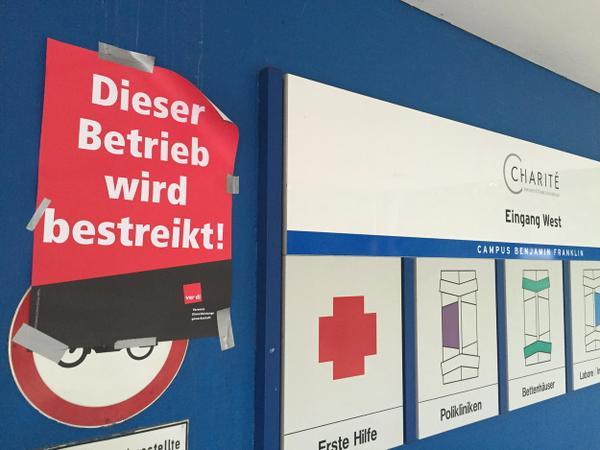 Currently up to 900 beds out of a total of 3,000 are closed due to the strike. 200 operations have to be cancelled each day – the hospital management claims they are losing 500,000 euros daily. Management claims that the strike is endangering the lives of patients – but strikers answer that the current lack of personell is endangering patients all year long. The hospital tried to have the strike prohibited due to the “unreasonable” demands, but they have already lost in two different courts.

Solidarity for this struggle has been, by Germany’s standards, overwhelming: A newspaper’s online survey showed 99% of readers in favor of the strike. A demonstration on Tuesday mobilized well over 1,000 people, including workers from the postal service, the retail sector and other hospitals, as well as a few medicine students and doctors. A broad spectrum of the left was present, including the reformist party DIE LINKE, autonomist groups and half a dozen Trotskyist organizations. There have been solidarity actions at different Berlin universities.

The hospital workers have an opportunity to link up with other struggles. Germany’s postal workers have been on indefinite strike for two weeks against outsourcing, and both the Charité and the postal workers are organized in the services sector union ver.di. The strike at Amazon (also ver.di) is ongoing – on Wednesday there was a massive demonstration in the city of Bad Hersfeld with 1,500 striking Amazon workers from across Germany. At the same time, a national strike of childcare workers (ver.di too) was almost cancelled by the bureaucracy with a horrible result.

Strikers at the Charité need to pay careful attention to the actions of their leadership. While there are daily meetings called “strike assemblies”, all relevant decisions are reserved for the trade union bureaucracy. A strike at the Charité in 2011 was broken off by the bureaucracy after just four days. The hospital has sourced out cleaning and technical jobs to a low-wage company called Charité Facility Management (CFM), and the CFM workers – who don’t have any type of collective contract – are not included in the struggle. The CFM strike back in 2011 was abandoned by the bureaucracy.

Solidarity is key to this struggle. But only the workers’ self-organization – such as strike assemblies that make decisions, and an elected and accountable strike leadership – can guarantee the fulfillment of the workers’ demands. This strike has the potential to be truly historic for the working class in Germany.

Please send solidarity messages to the workers. Just make a sign that says Solidarität mit dem Streik an der Charité (Solidarity with the strike at the Charité), snap a picture and send it via Facebook.