After 46 days on strike, workers at a cake factory in Los Angeles have rejected the latest contract proposal from the bosses. These cake makers are among many striking workers across the United States fighting against hyper-exploitative bosses. 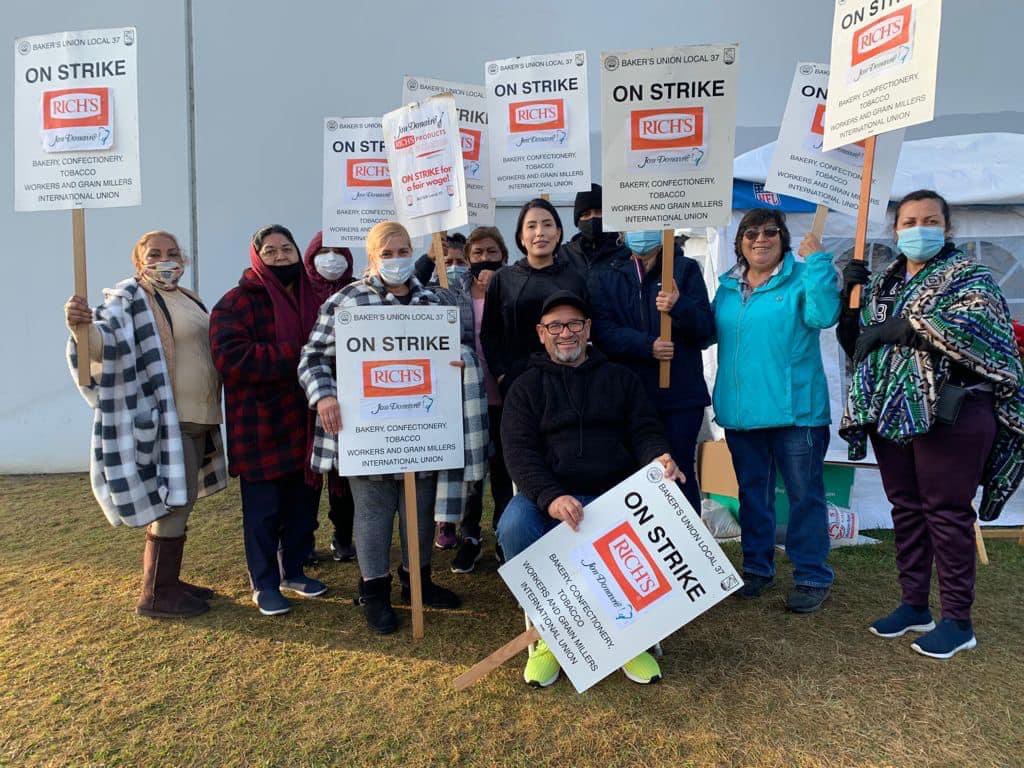 Workers at a cake factory in Santa Fe Springs, California, in southeast Los Angeles County, have voted down the company’s proposal for a new collective bargaining agreement. The strike — which will now continue — began on November 3 at Jon Donaire Desserts, a Rich Products brand sold at chain stores, including Walmart and Baskin-Robbins.

The mostly Latina immigrants at the factory, who are forced to work up to 15 hours a day. have been on the job throughout the pandemic, despite health and safety risks. Now they’re demanding better wages, improved retirement benefits, and changes to the company’s abusive, punitive point system, which gives workers only three days of sick leave per year.

The workers are members of the Bakery, Confectionery, Tobacco Workers and Grain Millers International Union (BCTGM) Local 37. BCTGM also represents workers at Kellogg Company, where 1,400 are still on strike, as well workers at Nabisco and Frito Lay.

Strikers interviewed by More Perfect Union tell of the physical toll that the increasingly demanding pace of work takes on their bodies, citing cramping fingers, arthritis, and back pain. They are expected to work at an excruciating speed — a typical production quota is 13 cakes per minute for an individual worker. Though their contract stipulates eight-hour workdays, they’ve been working 12- and 14-hour shifts.

The struggle at Rich Products is led by women, who make up a majority of the workforce, and has a strong feminist character.

Julissa Marquez, one of the striking workers, denounced the company for how it takes advantage of the vulnerable financial position of its employees to get them to work longer hours. Many workers are single parents, widows, or elderly, and are the sole source of income for themselves and their families. Like workers at Kellogg, cake makers are often told at the very last minute that they have to work overtime.

Jon Donaire uses a point system that disciplines workers for seeking time off and punishes them for getting sick. Workers who exceed seven points over a 12-month period lose their jobs. Strikers have recounted situations in which the company denied time off and gave out points for going to cancer treatments and follow-up appointments, as well as for taking medical time off recommended by doctors.

After years of being disrespected and hyper-exploited by the bosses, the women at the plant are taking a stand for dignity and respect on the job.

On top of more sick days and changes to the disgraceful point system, strikers are demanding better wages and improved pension and retirement benefits. Currently, many workers at the plant make less than $17 an hour — an untenable rate given the high cost of living in the Los Angeles area.

In negotiations, BCTGM is demanding a $1 an hour wage increase, which comes out to less than the rate of inflation. Yet even this modest demand is double what the company offered in its latest contract proposal.

“They’re offering us cents while they make millions or billions of dollars every single year,” said Elvia Castillo, one of the striking workers. She’s absolutely right. Rich Products is a $4 billion business. Bob Rich, the majority owner and son of founder Robert E. Rich, had a net worth of $5.65 billion in 2017.

Across the country, workers in food processing plants — and workers in manufacturing and other sectors more generally — have grown sick and tired of low pay, deteriorating conditions, abuse, forced overtime, and never-ending speedups and hyper-exploitation at the hands of the bosses. The workers at Rich Products are one vital part of this growing struggle, and the entire labor and socialist movement has a duty to support these workers.

The plant is at 12805 Busch Place in Santa Fe Springs. Readers are encouraged to join the picket line and stand in solidarity with the Rich Product strikers. In addition, the union is calling on supporters to boycott products from Rich Products and Jon Donaire.

You can follow the strike on social media at the Rich’s Union Members Appreciation Page. And strikers have started a GoFundMe campaign so strike supporters can donate and help sustain the workers and their families for the duration of this struggle.