The New School students and workers are living at an occupation to save the cafeteria workers jobs and fight union busting. This is a clear example of student-worker alliance and solidarity in practice. 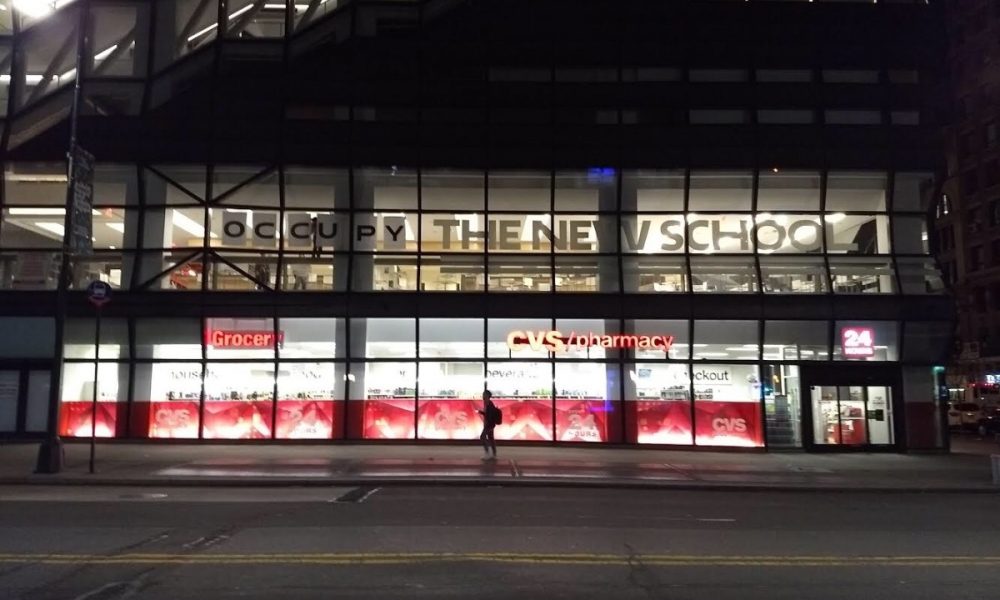 On May 1, International Workers’ Day, dozens of undergraduate and graduate students stormed the cafeteria of The New School in New York City, along with cafeteria workers, chanting “All of us or none of us! Every single job!” After a rally, they began occupying the university cafeteria in response to the pending termination of the contract of 45 unionized cafeteria workers who are expected to be replaced by low-wage, no contract student workers. Any cafeteria workers who are rehired would be hired through the university and not represented by the UNITE HERE! Local 100 union as is currently the case — clearly a union-busting tactic. 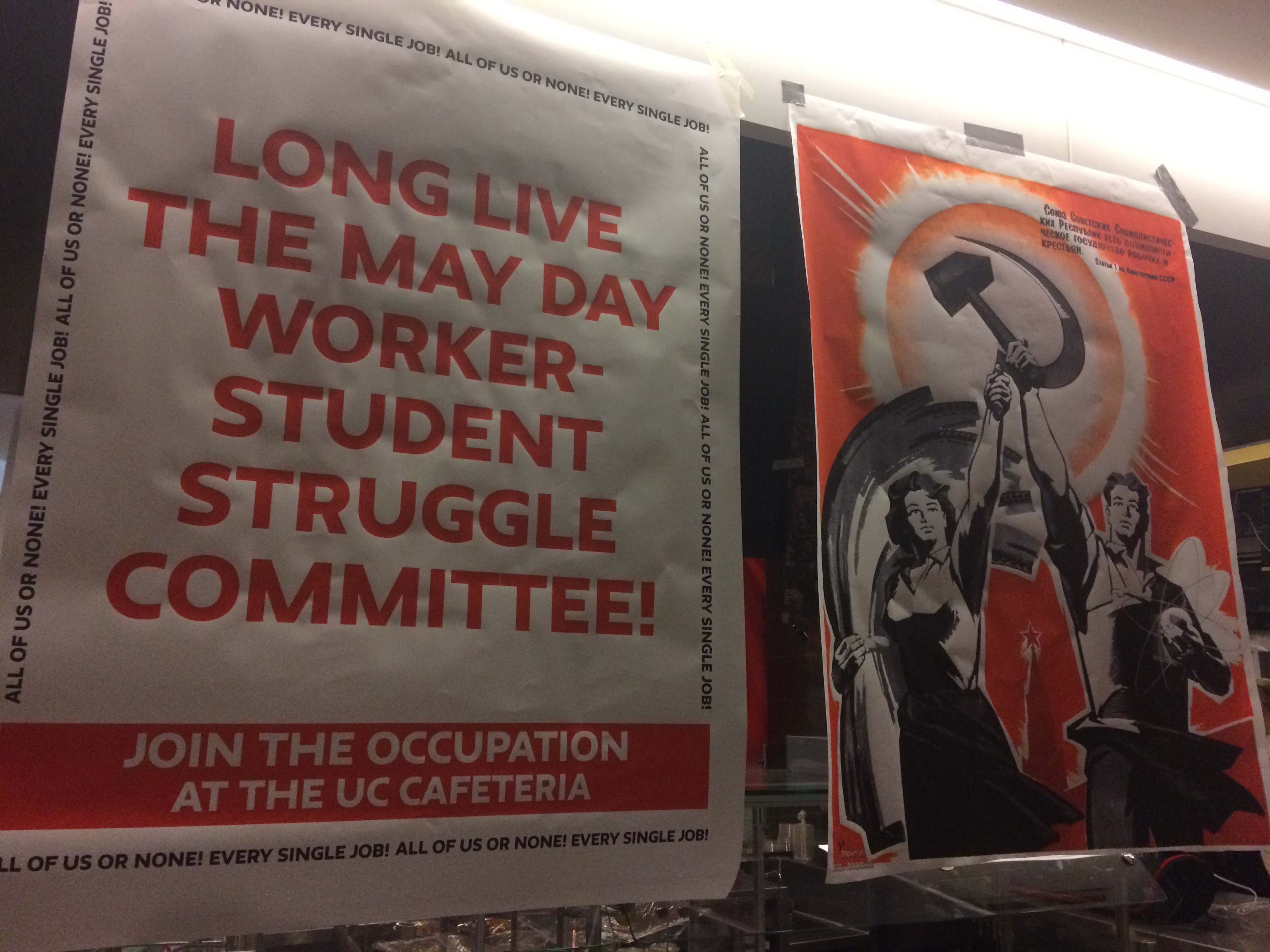 The occupation has been going strong, and dozens of students have been dropping in to do work, eat a snack, and discuss. Usually, food costs almost 15 dollars a meal, but now the students are offering food for free and are asking for donations. The cafeteria, where students are living, is spotless. “We spent all of yesterday cleaning,” said Stephanie Stein, a philosophy graduate student. “We want this to be a good place to live, so we washed the floors, wiped down everything.” The cafeteria has been decorated with Soviet-style posters proclaiming the power of the working class, Black Lives Matter banners, and a Palestinian flag. The occupation holds assemblies every day to discuss and plan next steps and actions.

On Thursday, May 3, students from the New School, as well as other local universities, such as CUNY and NYU, rallied outside the University Center on 5th Ave to demand that every worker be rehired with the same benefits and higher wages, and to call for tuition vouchers, student-worker control of the cafeteria, as well as the resignation of New School treasurer Steve Stabile.

Inside, The New School Student Communist Group, which has been active in the struggle, passed out lists of demands, and students were camped out with sleeping bags. The students have been running the cafeteria completely on their own, sharing the tasks of cooking and cleaning. The University has already come into the occupation to seal shut the doors to the pantry so that students cannot use the cafeteria supplies.

The students are denouncing not only these layoffs but the structure of the university. In the hallway to enter the cafeteria, there is a poster with how much key figures at the New School make. The President of The New School makes over 2 million, the Provost makes almost 400,000, and the Senior Vice President for Finance and Business makes 3k.

Stein said, “We are sick and tired of the New School constantly touting its progressive history. The New School does have this long and honored history of being a radical institution, but frankly… this has not been the case at all… We’ve been charged unfair tuition hikes, they’ve been cracking down on all workers and all unionization, and trying to bust it as much as possible.”

When asked about the occupation, Abad Degraffe, a cafeteria worker at the New School for almost two years and an ex-marine, said that he “came here for the last chapter of my life, to retire” and that the student occupation has been inspiring because the students “believe in our cause.” 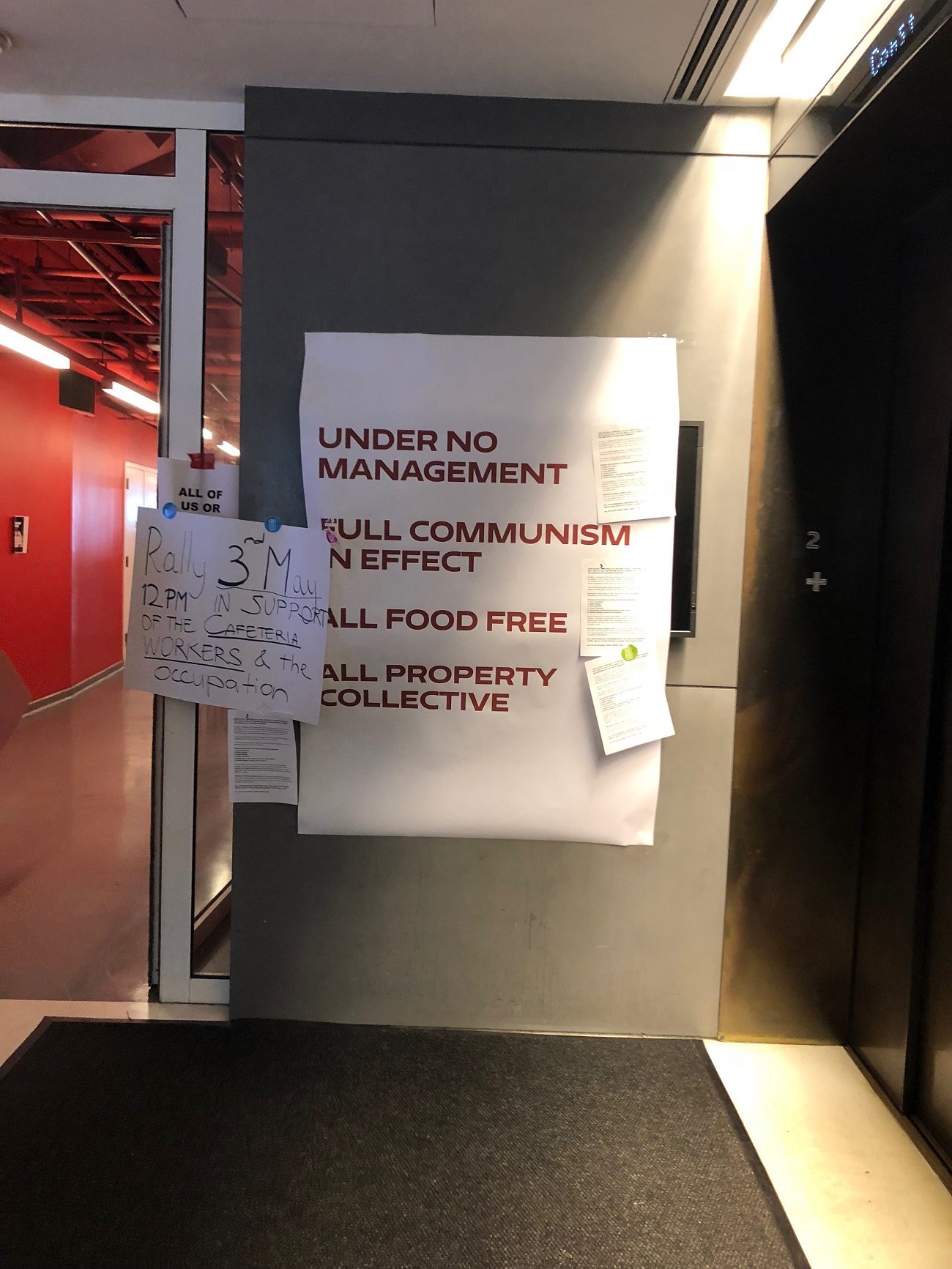 According to SENS-UAW, the student worker union, the New School is set to strike on May 8. This struggle is just one in a series of recent strikes across the education sector, beginning with West Virginia and followed by Oklahoma and Arizona. We’ve also seen graduate student workers strike last week at Columbia University, and the CUNY Graduate Center voted to strike if adjuncts do not receive 7k per course. Workers across the University of California system, including healthcare workers from UC hospitals, are set to strike from May 7-9 with over 50,000 workers, and students are planning to join.

As the students continue to maintain their occupation, they will need support. They need donations of supplies, as well as money to keep the occupation going. To support the struggle at the New School, students are asking for donations including toothbrushes, toothpaste, dry shampoo, tampons and pads, and other supplies. To send donations, Venmo: @Solidarity-4-Ever and follow the new developments at the occupation here. 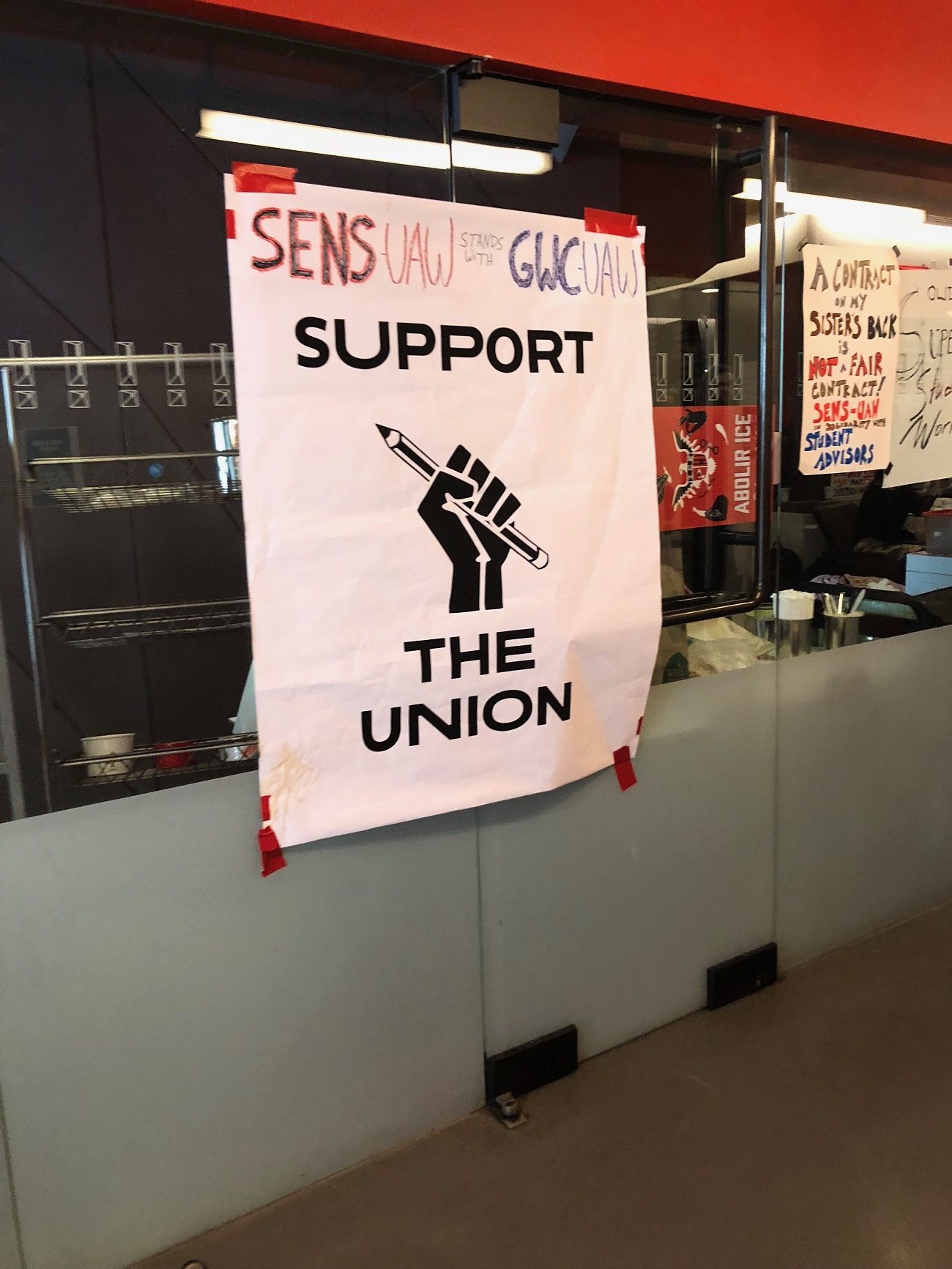