Student Workers at Columbia Are on Strike Again — What Will It Take to Win?

Yesterday, more than 3,000 student workers at Columbia walked off the job to demand a living wage and healthcare. In order to win these demands, however, the rank and file will have to unite with faculty and students, and be willing to shut down the university by taking their strike all the way to the end of the semester. 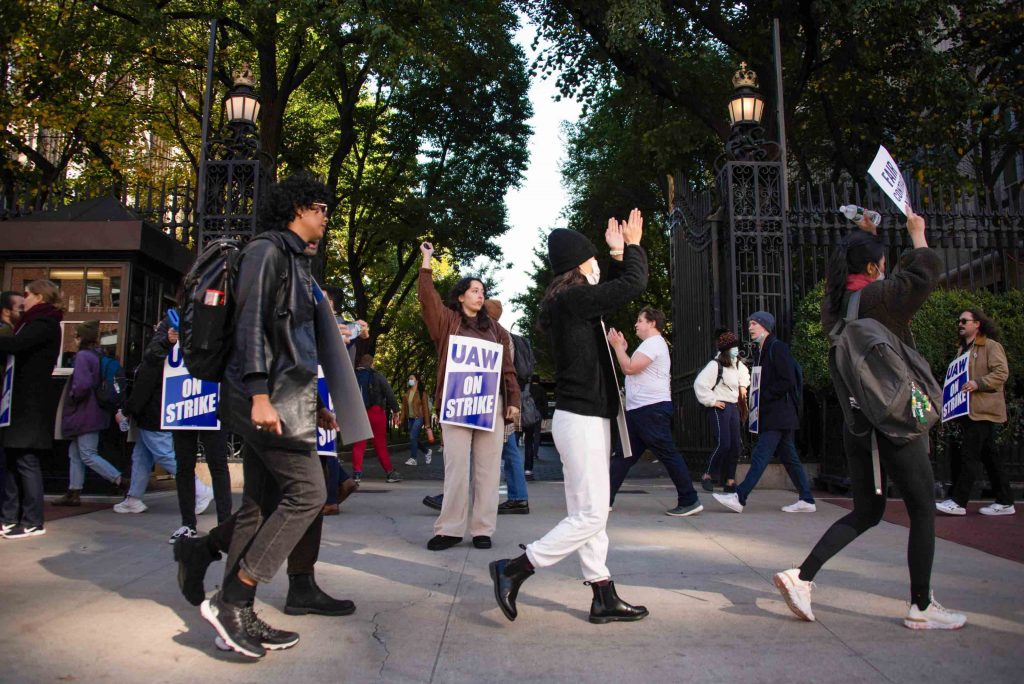 More than 3,000 student workers at Columbia University, members of United Auto Workers Local 2110, are once again walking out of their classes and taking up picket lines around the prestigious tree-lined Manhattan campus. Yesterday’s strike, which began at 10 a.m., is the second time this year that Columbia student workers have walked out in an effort to win a first contract with the university, which has spent millions of dollars and almost a decade fighting first against union recognition and now against workers’ most basic demands.

The union says that they are fed up with the University’s intransigence, and are demanding an increase in wages that is consistent with the extraordinary costs of living in New York City, neutral third party arbitration, and comprehensive healthcare benefits. Currently, Columbia student workers make between $6,000 and $19,000 less than the living wage for New York City, according to the MIT living wage calculator.

These demands follow on the heels of the most recent financial statement of the Columbia Board of Trustees, which shows that during the pandemic, the university increased its net assets by a whopping 20 percent, or $3.3 billion. The union has argued that meeting their full demands would cost less than one half of one percent of these assets.

Like other universities across the country, Columbia has taken advantage of its student workers for decades, paying them far less than the amount of revenue they help to produce for the institution, and refusing to allow them to organize because they are students. These workers, many of whom teach dozens of undergraduate students every semester, are vital to the functioning of the university, and many classes cannot continue without their labor.

In fact, the union has estimated that over a thousand Columbia undergraduates will face class cancellations because of the university’s exploitation of its own student workers. Meanwhile, even a week-long strike could jeopardize the university’s Middle States accreditation, which requires a certain number of instructional hours for undergraduate course credit. Clearly these workers have a lot of leverage, but using that leverage will require more than a week long strike.

Unfortunately, the union leadership does not seem to get this. The UAW’s tactics and bureaucratic leadership have only made the university’s efforts to stall for a first contract that much easier.

The problems began shortly after the official recognition of the union in 2017, when the UAW leadership agreed to a back room no strike clause that has had long lasting consequences, hampering early militancy and limiting the ability of student workers to force the university to make concessions. Furthermore, the union bureaucracy, which has now called three strikes in the last three years, has not until now called for an indefinite strike or continued to strike for more than a week or two. In 2018, these workers had the opportunity to show the university how vital their labor is by continuing their strike past the end of the fall semester, but the UAW leadership balked at the prospect. Instead, they ended the strike without a settlement, allowing a full return to normal for the university just in time for final grades. In response, Columbia awarded this loyalty by proposing exactly zero percent wage increases in its next offer to the union.

If these workers wish to win their demands, they will need to do more than hold symbolic strikes that don’t really affect the university’s bottom line or its reputation. To do this, they will have to build a movement among all of the workers and students at Columbia to shut down classes permanently until their demands are met. This will require winning the active support of the rest of the students, workers, and faculty at the university. In 2018, hundreds of full time faculty signed a petition in support of student workers. These faculty should immediately stop teaching their scheduled curriculum, and instead bring their classes to the picket lines every day until a settlement is reached. Likewise, many hundreds of students have shown solidarity with and support for the union. Last week undergraduates joined student workers to protest Columbia President Lee Bollinger’s “Freedom of Speech and Press” course. These students can continue to support the strike by organizing mass walkouts, shutdowns, and demonstrations that can extend the strike to the entire university.

It’s also essential that other education worker unions across the city, including the more than 27,000 faculty and staff at the City University of New York and New York University graduate workers who are also organized by UAW, stand in solidarity with these workers, join the picket lines, and refuse to speak or teach at the university until a contract is reached.

At a time when everyone in the country is talking about strikes, when 22,000 U.S. workers are on the picket lines, when the essential nature of labor has never been clearer, and when millions of workers are simply refusing to settle for shitty jobs, a truly militant strike to shut down one of the most prestigious and exploitative universities in the country could have a catalyzing effect on higher education and the labor movement. Winning demands for a living wage are important, but these workers would do well to consider the power they have to bring the university to its knees, and the historic role of previous labor actions. To build that consciousness, workers everywhere should support the Columbia student workers, join the picket lines, and link their struggles together.