Student-workers go on strike in Berlin

Seventeen years is a long time. And that’s the last time Berlin’s 11 colleges and universities – including the Free University, the Technical University and Humboldt – raised the salary for their student employees. But that could all change when their current employees go on strike, Tuesday, January 16 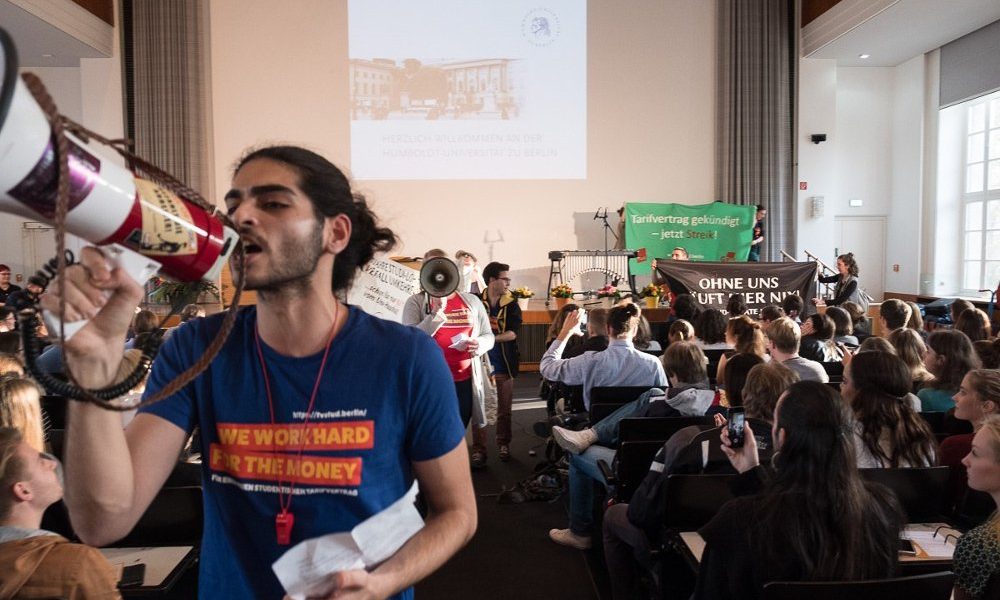 This article was originally published in the german site Exberliner

How much time has passed since 2001? That was so long ago I can barely remember. That was before I moved to Germany – before I owned a mobile phone!

Seventeen years is a loooooong time. And that’s the last time Berlin’s 11 colleges and universities – including the Free University, the Technical University and Humboldt – raised the salary for their student employees. But that could all change when their current employees go on strike, Tuesday, January 16.

Studentische Hilfskräfte or SHKs are students who work part-time at the university. There are 8000 of them across the city. According to the law, their jobs are supposed to involve “research and teaching activities”. Some of the jobs meet these criteria, if only just barely: giving tutorials (the equivalent of teaching assistants in the States) or making photocopies for professors. But others are basic office jobs: managing the computer networks or sorting books in the libraries.

My buddy Yunus Özgür works at the Free University helping international students. Someone doing the same job 17 years ago would have made €10.98 per hour. Now Özgür earns… €10.98 per hour. Due to inflation, this means wages have decreased by 25 percent – and the Christmas bonus was eliminated in 2004. This is because SHKs like Özgür got their last Tarifvertrag (collective bargaining agreement) way back in 2001.

“Ohne uns läuft hier nix!” is their slogan. (“Nothing works here without us!”) But is their labour essential to keep the universities running? Will everything shut down without SHKs? I can imagine that there won’t be riots just because an assistant is missing at the library. But the high-pressure weekly tutorials for physics students at the Technical University without TAs? There may be some chaos if they are all cancelled.

We’ll see next Tuesday. The TVStud campaign, a joint initiative of the trade unions ver.di and GEW, has called on all student employees to strike. They will gather at 14:00 at Bebelplatz, opposite Humboldt University. At least 1000 trade union members have signed up to join the action.

They already disrupted the opening ceremony for the fall semester at Humboldt – two of them were even arrested while protesting at TU. Right before Christmas they organised a techno parade through the city.

Their demands are unusually high for trade union struggles in Germany: They want €14 per hour, automatically adjusted for inflation, and they want all the money they lost over the last 17 years. “These jobs sometimes demand multiple languages and experience with statistics programmes,” says Özgür. “It’s laughable when the universities talk about ‘unskilled work’.”

The universities have so far only offered wage increases of a few cents. Everything looks like there will be more than one day of strikes. And a long strike at the university is something Berlin hasn’t seen in a long time – in fact, the last one I can remember was back in 2001, before I owned a mobile phone.