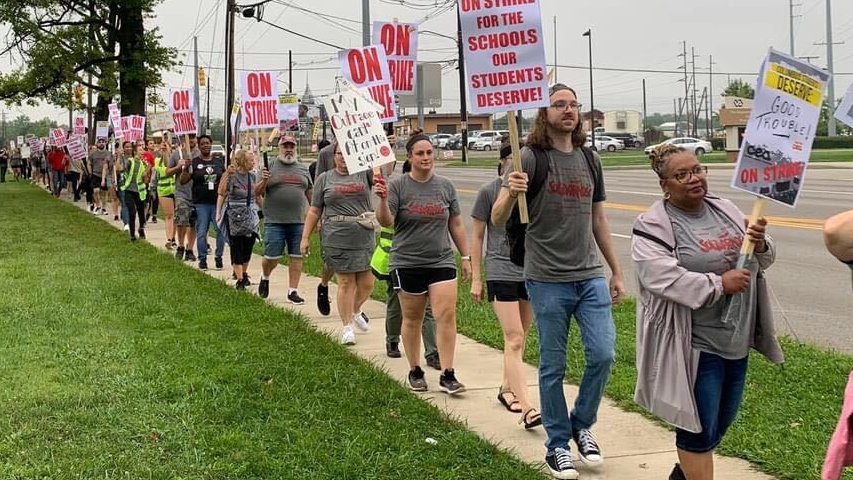 At 7 o’clock Monday morning, teachers and education workers of the Columbus Education Association union in Ohio went on strike, marking the first time teachers have gone on strike in the city since 1975. Columbus City Schools is the largest school district in the state of Ohio and the school year was originally scheduled to begin today.

The 4,500-member union — representing teachers, librarians, nurses, counselors, psychologists and other education professionals — met for more than three hours to vote on Sunday. Over 94 percent of members voted to reject the Columbus City school board’s latest “final” offer and in favor of going on strike.

The school district has hired 600 substitute teachers to cover for the 4,500 education workers who are currently on strike. The district is telling the parents and guardians of the nearly 47,000 students in the district to log in virtually for synchronous and asynchronous learning for the first day of classes or risk truancy — putting families at risk. In other words, the school district is trying to coerce Columbus families to cross the virtual picket line.

The workers’ demands include smaller class basic sizes, safe school buildings with adequate air conditioning and heating systems, a cap on the number of class periods during the school day, and a well-rounded curriculum with full-time art, music, and physical education teachers.

The union is also demanding a wage increase for its members amid inflation spikes. While consumers are absorbing the impact of rising prices, corporations are raking in record profits and keeping their workers’ wages low, who are feeling the mounting pressure of the rising cost of living. The board’s most recent offer from August 18 promised a mere 3 percent annual raise despite an inflation rate of 9 percent.

Teachers have contrasted the deplorable conditions in the city’s schools — leaky ceilings, mold, no temperature regulation,  moldy air filters, flooding and shoddy plumbing — to the state-of-the-art modern buildings for the educational policymakers (complete with $4,500 Zenbooths) who claim to not have the funding to fix the dilapidated public schools. Now, these policymakers are “disappointed” that the teachers voted to strike. The educational “leaders” and bureaucrats who claim to have students’ best interests in mind are once again showing their true colors.

This teacher strike comes in the midst of an attack on public education across the country and around the world. Weeks ahead of the 2022-23 school year, New York City is embroiled in a court battle over the slashed public school budgets proposed by pro-charter Mayor Eric Adams and approved by the City Council headed by Speaker Adrienne Adams. These budget cuts are part of the ongoing attempt to divest from public schools in order to clear the way for privatization and charter schools. In New York, it is illegal for public employees like teachers to go on strike because of the constraining Taylor law, despite paraprofessionals making poverty wages and abortion not even being covered by insurance.  The Columbus teachers teachers strike also comes as 2000 education workers in Philadelphia voted to authorize a strike for when their contract ends on August 31 and workers at American University in Washington DC started a five day long strike on Monday to demand better wages.

Columbus teachers, students, and community members can look to the inspiring examples of the teachers strikes in 2018-19 and in Minneapolis earlier this year, who connected the fight for working and learning conditions to the fight for Black lives, and the restoration of the unfulfilled demands of the Black Lives Matter movement. The Columbus police department, for example, has over 37 times the budget of the Columbus City Schools; while the police receive hundreds of millions to terrorize communties, public school districts are crumbling.

As usual, anti-union rhetoric is ramping up, claiming that the strike will impact student learning. But we know that students will learn far more from teachers who are willing to organize collectively and fight back than those who timidly accept the crumbs they are offered. Going on strike is the best lesson an educator could ever teach.  As Minneapolis educators reminded us earlier this year, teachers’ working conditions are students learning conditions; and teachers, communities, and most importantly students, have a major role to play in fighting for their demands.

Teachers and community members are holding picket lines every day from 7am to 4:30pm at 20 schools. Here is a graphic of ways to support them!