On May 3 an elevated bridge in the Mexico City subway collapsed, taking with it two train cars and killing 26 working-class passengers. Three months later, the supposed “left-wing” government has made it clear that it wants impunity for the culprits. 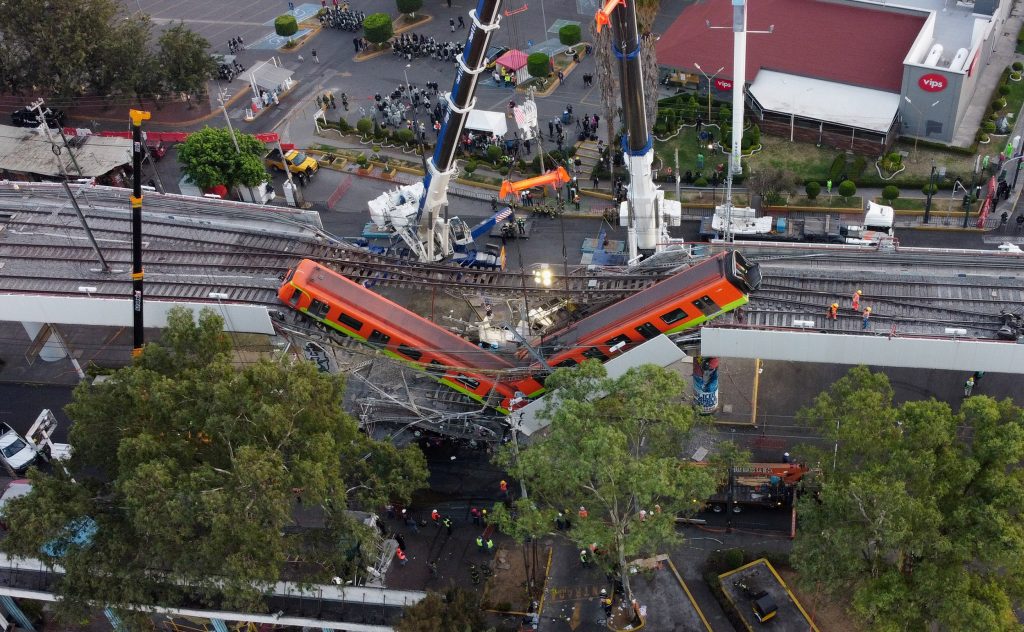 Working under capitalism is exhausting for those of us who make the wheels of the economy turn every day. Long shifts and commutes take a heavy toll on workers who often live on the outskirts of the city, like working-class families in Mexico City who tend to live on the city’s east side, particularly in the dense districts of Iztapalapa and Tláhuac.

To help workers commute from these areas, the Mexican government built a subway line between the east side and the center-west, where most jobs are concentrated. The night of May 3, 2021, the elevated bridge between the stations Tezonco and Olivos collapsed, killing passengers inside a subway train just 50 meters from reaching the station.

Why Did the Bridge Collapse?

Mexico City’s subway system was introduced in 1969, when Mexico still had a high illiteracy rate. For this reason, Mexico City has color-coded subway lines, and the stations have abstract drawings to make it easier for passengers to know which station they are in. The subway line in question is Line 12, color coded in gold and therefore known as the “golden line.”

Work for Line 12 started in 2007 under Marcelo Ebrard, former head of the Mexico City government and current secretary of foreign relations, one of the closest associates of President Andrés Manuel López Obrador (AMLO). Line 12 was supposed to open for Mexico’s bicentennial in 2010, but several problems delayed the inauguration. The trains for Line 12, although newer and more modern, cannot be used for other lines, because its rails differ from those of the rest of the subway network. Several construction flaws kept being detected and supposedly fixed before the line was inaugurated in 2012 by both Ebrard and his successor Miguel Ángel Mancera.

For most of his administration, Mancera refused to raise the budget to maintain Mexico City’s subway, even if the golden line had to be closed off in several stations for repairs. After the 2017 earthquake, Mexico City inhabitants and subway users pointed out cracks and flaws in several elevated bridges, beams, and pillars, but Mancera did nothing.

Mancera was succeeded by Claudia Sheinbaum, the current head of the Mexico City government and a member of AMLO’s party. Sheinbaum had previously been accused of neglect when the 2017 earthquake destroyed a school in her district, killing 19 children and seven teachers, even though official inspections declared it to be safe. Her current administration has seen a rise in subway accidents. Before her, the largest subway disaster — and the largest one to date — happened in 1975, when two trains collided, killing 31 people.

Just last year, however, there was a collision at Tacubaya station, injuring many. In January a short circuit caused a fire in the subway control center, killing one person. These accidents reflect the systematic budget cuts from both the Ebrard and Mancera administrations. This came to a tipping point the night of May 3.

On that day, at about 10 p.m., workers were returning home after a hard day’s work. There’s the story of Santos Reyes Pérez, a construction worker and father of two; Brandon Giovanny Hernández Tapia, a 12-year-old boy who had called his mother telling her he had “a surprise for her”; Liliana López García, a 37-year-old clothes shop manager who had called her son telling him she brought dinner so they could eat together; Cristian López Santiago, a 41-year-old lawyer whose two young daughters were waiting for him at home; Juan Luis Díaz Galicia, a 39-year-old driver who rarely used public transport; Nancy Lezama Salgado, a 22-year-old student who had just said goodbye to her boyfriend before taking the subway.

None came home because the elevated bridge between the stations Tezonco and Olivo collapsed. The collapse also killed José Juan Galindo Soto, a 34-year-old construction worker who was driving his car with his wife on board below the subway station. In total, 26 people lost their lives.

The Government Wants the People Responsible to Get Off Scot-Free

As soon as people saw the bridge collapse, several passersby took to the task of rescuing everyone. Social networks buzzed with concern and rage at the images of destruction. There were several reasons for their anger: users and neighbors had been warning about the flaws since 2017, multimillionaire construction companies saved themselves a few pesos by cutting corners and reducing safety in the maintenance work, and most importantly, it could have been any of us in those subway cars.

Despite declaring that the people responsible would be punished, both AMLO and Sheinbaum have done little to seek justice, much to the outrage of the victims’ families. The family’s lawyers made public how the government had victimized the families, as well as irregularities in the investigation conducted by the Office of the Attorney General of Justice.

The families declared that they do not even know who is responsible for investigating the disaster. They also say they have not had the opportunity to see the investigation file, which contains expert opinions and reports. When the Prosecutor’s Office refused to disclose this information, the families sought a meeting with the head of this agency, Ernestina Godoy, who refused to meet with them.

While the victims are denied information, Carlos Slim, whose company helped build the golden line, has had the president’s ear. An official expert report published by Proceso magazine confirms Slim’s culpability: deficiencies were detected in the steel columns of the elevated section of Line 12, built by one of his companies. Furthermore, the Mexican Association of Civil Engineers revealed that almost a third of the section needs repairs with specialized equipment, as well as the section from the stations Periferico Oriente to Zapotitlán due to “questionable welding, insufficient separation of beams, columns with superficial cracks in columns, beams and heads, misaligned diaphragms in steel beams and inconsistencies in horizontal stiffeners.”

But the truth is that the president has had nothing but praise for Slim. During his daily morning press conference on June 18, AMLO said,

I want to thank the businessmen, among other important businessmen, Carlos Slim, who has acted in a responsible and institutional manner and is always in a position to reach agreements on everything. He does not play hardball like others, who are fortunately few, who want to subjugate the government. They have become accustomed to it.

The agreement between Slim and AMLO is that the subway section will be rebuilt “free of charge for the treasury” by one of Slim’s construction companies, an agreement the president has lauded. In effect, Mexico’s wealthiest capitalist is being thanked for correcting the damage that he himself caused, as if the damage were limited to a falling beam and there were not 26 working-class deaths.

Meanwhile, Ebrard and Mancera still have their government jobs, and although a sector within MORENA is demanding his impeachment, Mancera has been protected and defended by his fellow senators, including MORENA legislators.

Sheinbaum, for her part, has not been questioned and is the one in charge of sending empty messages promising justice for the victims. But justice is a political issue in itself: the bridge was a public work that both the government authorities and capitalists helped build. Justice means pointing out who was behind this tragedy and holding them accountable.

Government and Capitalists Are on the Same Side Against the Workers. Justice for the 26 Victims!

The tragedy on Line 12 — like many others under capitalism — has its origin in the greed and collusion of businessmen and governments. This work, which cost Mexicans 26 billion pesos (US$521 billion, almost US$200 billion more than the original budget) helped enrich construction companies like Slim’s.

Expert reports have shown not only the bridge’s several construction flaws but also the low-quality materials used to build it. These incidents in these last few months after several uneventful decades in the Mexico City subway network point to the budget cuts made at the expense of workers that both the PRD, the center-left party that is in an electoral alliance with right-wing parties and Mancera belongs to, and the current MORENA administration have made. The union bureaucrats of the Mexico City subway union are siding with the capitalists against their own rank and file in refusing to oppose these attacks.

Justice will only come from the poor and working people organized and fighting in the streets. We need an independent commission made up of architects, civil engineers, relatives of the victims, human rights organizations, and other voices, without the participation of the congressional parties, where accountability for the tragedy is put first.

We also need to expropriate the businessmen and companies responsible for the tragedy, including Carlos Slim, whose assets should be used to improve the maintenance of the entire network and reduce the cost of the ticket to its original price of 2 pesos (10 US cents). We demand a subway network at the service of the population and not a neglected network whose budget is used to enrich high officials and union bureaucrats, and to increase the profits of businessmen and their servile politicians.