Suicide or Lynching? Five People of Color Found Hanged in Less Than a Month

In the past month, the bodies of five people of color have been discovered hanging from trees. The police are labeling these deaths suicides, yet the families and community members disagree. Are these hangings the product of a new wave of lynchings by white vigilantes and the police? Content warning: brutality, racist violence against Black men. 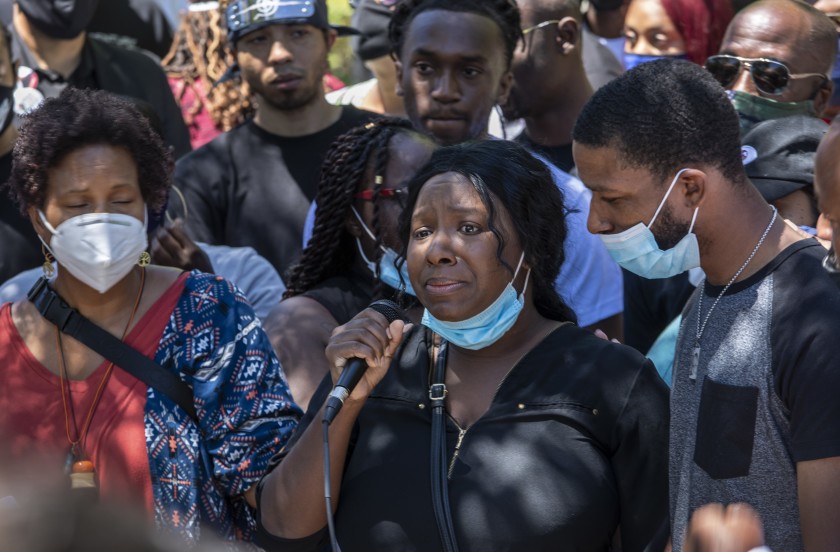 Across the country, Black bodies are being discovered hanging in trees and the police are dragging their feet on the investigations. From California to Texas to New York City, more and more Black people are being discovered hanged in the midst of a national uprising against police brutality and anti-Black racism. In each case, the police have labeled these deaths a suicide with little to no investigation. That the police are doing this — and often disregarding the victims’ families assertions that they were not suicidal — is both outrageous and offensive because it assumes that Black people across the country are suddenly choosing to take their own lives in a way that very specifically evokes the racist violence of the KKK in the Jim Crow era. No, the much more likely scenario is that these men were murdered as retaliation for the mass protests against police violence and that the police are helping to cover it up.

Public outcry has been quick and loud. Parents and loved ones have largely denied that these could have been suicides, and activists have called for more investigation. In response to these pressures, as well as the pressure of the ongoing protests, some police departments have begun to re-examine their initial claims; but it is very clear that the state is perfectly happy for these victims to remain nameless Black bodies. But they do have names. These victims of what are very possibly modern day lynchings include Robert Fuller, a Black man who was found hanging from a tree in Los Angeles where the coroner declared his death a suicide, a ruling that is now being walked back after mass public outrage. Just a few days after Fuller’s body was found, officers from the LA sheriff’s office shot and killed his brother, in an incident that there is no video evidence of.

A week earlier and only 50 miles away, another Black man, Malcolm Harsch, was discovered hanging from a tree across from a library. Police also ruled Harsch’s death a suicide despite the fact that there was blood on his shirt, possibly indicating a struggle, and Harsch’s family initially insisted that he was not depressed and that suicide was “not plausible.” Yet another example comes from this past week after Dominique Alexander, a Black man from the Bronx, was discovered hanging from a tree in upper Manhattan. Also in New York City, nooses appeared in a city park the night before Juneteenth. Again, the NYPD was uninterested in investigating. Since May 27, at least five people of color have been discovered hanging in trees across the country.

History textbooks and pieces of art will often try to portray the violence of the Jim Crow era as something that happened in the past, something we have moved on from, but anyone who has been paying attention knows that is a lie. The hundreds of police murders of Black men this year and the very-real possibility that we are in the midst of a modern resurgence of lynching show that vile ideology of white Supremacy is still a very real threat to Black communities. American capitalism is built upon anti-Blackness and cannot survive without it. Because of this, violence will always be used to continue the racist system. Often this violence will be from agents of the state themselves, as we saw in the murder of George Floyd and so many others. But this violence can and does often come from racist vigilantees, such as in the murder of Ahmaud Arbery. These vigilantes are not always explicitly in league with the state but they serve the same purpose. That is why, in the midst of the largest uprising against racist violence in a generation, many are worried that we are seeing a return of lynching. Because by challenging the existence of the armed force of the state and the racism that sustains it, protesters are coming very close to challenging the full system itself. It is no wonder then that vigilantes are taking it upon themselves to attack protesters — be it by driving their car into protests or by a possible return to the murderous intimidation tactics of lynching — and it is unsurprising that the police aren’t investigating.

In several states, videos from protests have emerged of police officers actively collaborating with armed members of the Far-Right. In one video, an officer warns the right wingers, who are all toting guns, that they are about to gas the unarmed protesters but that he couldn’t do it publicly because he didn’t want it to look like the police were “playing favorites.” This video was a visceral example of what we already knew: the far-right and the police are on the same side.

This is why it took so long to arrest the men who murdered Arbery. This is why these deaths are being labeled suicides without investigation. This is why the mysterious deaths of Black Lives Matter activists in Ferguson were never investigated. This is why public outcry about the murder of Oluwatoyin Salau is so important. Because the police cover up racist murders, even when they don’t commit them themselves. They do this because white vigilantism provides another form of intimidation that continues the oppression of the Black working class. Just as the KKK served to target Black activists who were fighting state repression in the 1960s, white vigilantes are serving the same purpose now. They are trying to scare people off the streets.

So far protesters remain undaunted and these heinous murders are only fueling the anger of the mobilizations. As the movement develops, protesters must raise the names of these new victims of racist violence in their calls for justice. We must demand justice not only for George Floyd and Breonna Taylor but also demand full investigations for Robert Fuller, Malcolm Harsch, Tete Gulley, Dominique Alexander, and everyone else who has been murdered by racists. Politicians, seeking to co-opt and contain the movement, are trying to claim that the minor reforms they are offering represent justice for Floyd. But even if they were enough — and, of course, they aren’t — we must still fight justice for these other victims. As the chant goes, no justice, no peace. The state cannot give us justice, so let us give them no peace.

Note: The original version of this article stated that six people of color had been discovered in the past two weeks. Follow-up reporting has shown that the actual number is five. The article has been updated accordingly.