The U.S. Supreme court overruled an executive order postponing the Wisconsin Primary, forcing voters to make a choice between their health and their vote. This is an unacceptable and unconscionable threat to public safety and may very well be the prologue of what is to come in November. 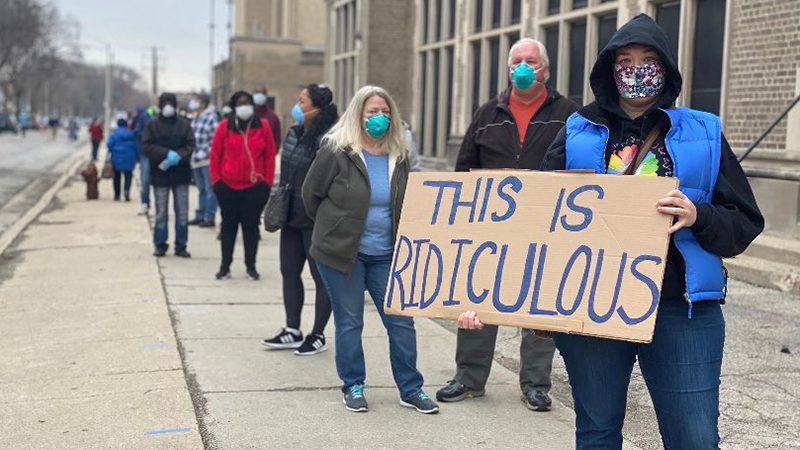 The Surgeon General has already declared that this week will be a “Pearl Harbor” and “9/11 Moment” in terms of the devastation that will come from the coronavirus. The Trump administration’s best case scenario puts the U.S. at around 2,000 deaths per day in mid-April. The time for non-essential workers to stay home is now more than ever.

While it may be easy to forget, with the constant stream of news, there is still a presidential election going on. Joe Biden has not yet succeeded in either eliminating Bernie Sanders from the race or in convincing him to drop out. So, the race for the Democratic nomination is still going on, even in the midst of the coronavirus. Many states — like Ohio and New York — have postponed their primaries due to public health concerns. Others, like Florida, still held their elections — to much indignation. However, as the crisis has worsened, calls have been even stronger to either postpone in-person voting or move all voting to a vote by mail system.

The Wisconsin primary was originally scheduled for Tuesday, April 7th. The day before the election was scheduled to go ahead, after failing to get the state congress to take action, the Governor of Wisconsin issued an executive order postponing the primaries out of concern for the public health. The governor instead sought to to extend the deadline for absentee voting by mail to June and, potentially, reschedule the in-person voting for when the virus had died down. This executive order came after pressure from both the public and  some elected leaders — including Senator Bernie Sanders.

However, the U.S. Supreme Court overturned the executive order on Monday night and ordered that in-person voting had to continue as scheduled on Tuesday.  This decision was met with much indignation and opposition. To make matters worse, the Supreme Court made this decision from their homes, because they didn’t want to meet in person due to health concerns. For many the message of the Supreme Court was clear: safety is important for them but not the average voter.

What this represents is the newest attempt to disenfranchise voters. Voters are now forced to make a choice between protecting themselves and those they live with and participating in an election. This is a hard choice for anyone, but is harder still for those without health insurance or the financial means to fight the virus. Voters are also reporting that they still have not received the absentee ballots that they requested. The Supreme Court’s decision to force an in-person vote is an act of voter suppression, plain and simple.

Additionally, reports began to come out during the day on Tuesday that indicated that several polling places had been closed due to virus concerns so the lines at existing polling places were longer than usual. That means it is actually harder to maintain social distancing than usual.

This is a criminal and dangerous decision from the Supreme Court that could very well result in mass death and infection.  The decision is the latest in a line of contradictions of the shelter in place order: including the mis-definition of certain workers as essential and the lack of proper safety measures — most notably the lack of personal protective equipment.

As many put pressure on Wisconsin to postpone the primary, prior to the Governor’s decision, one voice was notably silent: that of presumed Democratic Party nominee Joe Biden. Biden said in a press conference last week that he believed that the Wisconsin primary could be made safe. Indeed, he has never called for a primary to be postponed, even as he is moving the Democratic National Convention online — a move that eliminates fears of protests from Sanders’ supporters.  There is a reason for this: he wants this race to be over. The faster the coming primaries happen, the closer Biden comes to eliminating Sanders from the race and securing the nomination. Biden is putting his own political interests over the health and safety of the voting public, just as he did during the last few contests which were also not postponed.

The case of Wisconsin is an important one because it gives us a prelude to the November election. The timeline of the coronavirus crisis is constantly shifting and, at this point, there are real questions about whether or not it will be resolved before the general election in November. This means that the same question facing Wisconsin could soon face the whole country. Joe Biden has been clear that he will not support any delay of the November election. Biden also said that he would “much prefer…in-person voting”. Donald Trump, for his part, has been so opposed to vote-by-mail that he tried to include stipulations against it in versions of the stimulus bill that recently passed. Trump went so far as to say that, if there was greater voting access such as an entirely vote-by-mail election, that America would “never have a Republican elected in this country again.”

What this means is that there is an increasing likelihood that the choice between their health and their vote that Wisconsin voters are making today will be one that all voters will be asked to make in November. Voter suppression in the U.S. is as old as the country itself and, in recent years, has increased once again. At both the state and federal level, governments have conspired to keep voting access away from wide swaths of voters — particularly Black voters. This latest act of suppression is a totally unacceptable choice to force upon voters and the Supreme Court’s decision on Monday has laid the path for it.

If and when voters from the Wisconsin primary begin to fall sick and die, as a result of being exposed to the virus while waiting to vote, the blame will lay at the feet of the Supreme Court and all the politicians who allowed this to happen. The ruling class is revealing, once again, how little they care about us and our safety.

In the midst of the coronavirus, all of the horrors of capitalism are being exacerbated: homeless people sleeping in socially distanced parking lots, healthcare workers wearing trash bags, the lack of paid sick leave… The horrors of a pandemic in capitalism cannot be voted away. To fight it, we need class solidarity and class struggle, with the goal of a different kind of society: one that puts people over profit and is democratically run by the working class and oppressed. In short, we need socialism, and voting won’t get us there. However, voting is an important democratic right that everyone should have access to.  The Supreme Court and the politicians have demonstrated their complete disdain for democracy.