As expected, the Vienna Summit to negotiate a diplomatic solution to the Syrian Civil War ended with only a call for another summit. The meeting, which was attended by diplomats and ministers from 17 countries – including the United States, Russia, France, Saudi Arabia and Iran together with representatives of the UN and the European Union- has once again demonstrated that Syria has been turned into a battlefield where regional and imperialist powers settle their conflicting
interests. 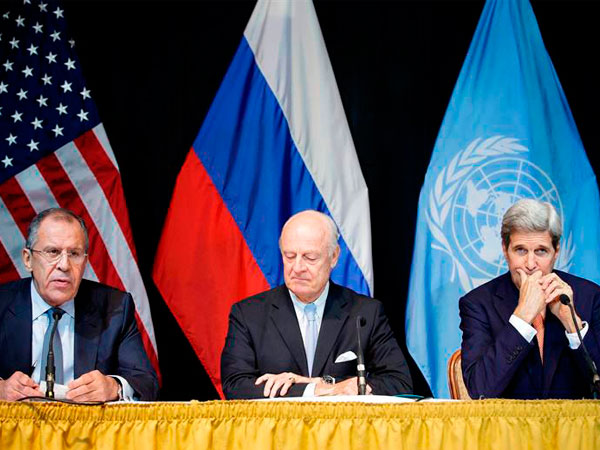 Despite being considered the biggest diplomatic effort to contain the Syrian
crisis since 2014, no representatives from the Assad government or the Syrian opposition were present.

As well as showing the internationalization of the Syrian civil war, the photo of the summit shed light on the new geopolitical reality in the region: for the first time, Iran was invited to a diplomatic summit with the European and US imperialists unrelated to its nuclear program. The meeting played host to the regional “cold war” between Saudi Arabia and Iran.

For their part, the European powers were eager to find a political solution to stop the waves of refugees fleeing Syria and to a lesser extent Iraq and Afghanistan.

Overall the diplomatic stances expressed the alignments that have already shown themselves militarily: on the one side Russia and Iran are trying to hold Assad in power as long as possible, at least during the early stages of a “negotiated transition”, On the other the United States, EU, Turkey and the Gulf states who, to varying levels, believe that Assad should immediately leave the government — despite the supposed priority of the United States being the defeat of ISIS.

But not all participants arrived at the summit in equal conditions. The United States has almost run out of valid strategic options to defeat the Islamic state after the failure of its timid policy of “arming the rebels”. Despite Obama’s promises, the US is moving towards deploying ground forces in both Iraq and Syria. This shift was anticipated by the Secretary of Defense, Ashton Carter, last week at a report to the US Congress, later confirmed by the US president at the end of the Vienna Summit. Last week the first American soldier died during an operation to release 70 Kurdish hostages ISIS was about to execute.

On the other side, one month after Putin launched the military intervention in Syria, both Russia and Iran have strengthened their position and by proxy, Assad’s. Undoubtedly the Russian bombardment, the troops of the Revolutionary Guards of Iran and Hezbollah militias have strengthened the Syrian army. Assad is unable to “win” the war, but no longer faces the imminent fall of his regime. He has strengthened his bastions against the advancement of the Islamic State, but above all he has done so by driving back groups of “rebels”– including the “moderate” ones supported by the United States, Saudi Arabia, Turkey and Qatar.

Overall, in the Syrian civil war three major battlefronts overlap: the dispute between the “West” and Russia, motivated by the weakness of the US in the region and Putin’s urge to mask the crisis in Ukraine; the dispute between Saudi Arabia and Iran and by extension the regional conflict between Sunnis and Shiites; and finally the confrontation between Turkey and the radicalized factions of the Kurdish national movement both within its borders and in Syria.

Neither the American nor Russian bombardments managed to significantly weaken the Islamic State in either Iraq or Syria. The US government has, so far without success, tried to pressure the Iraqi army into launching an offensive to retake the city of Ramadi, under the control of ISIS since May. The Pentagon wants to score a success in their competition with Russia and force ISIS to retreat. So far that outcome isn’t any nearer and the Iraqi government, an ally of Iran, is reluctant to provide such collaboration.

This situation where there is partial progress and setbacks but no definitive victory on the ground is also expressed in the difficulties faced by the United States to find a diplomatic solution, reconciling conflicting interests. An additional element of the crisis is the uncertainty regarding which “moderated” opposition group might integrate an eventual transition regime. The United States continues to support the Free Syrian Army as the main option. However the “rebel” field is fragmented. According to US intelligence, there are 13 groups of considerable size, but more than 1000 militias and local groups, which cover a wide political spectrum, secular, moderate and radical Islamist.

The Syrian civil war is perhaps the crudest consequence of the defeat of the uprisings of the Arab Spring. In the four years since its start, it has left a real humanitarian catastrophe: 250,000 dead and 11 million displaced (half the population of which 4 million have fled the country). Both the US intervention leading the Western coalition against the Islamic state and the Russian intervention to support the Assad regime have a profoundly reactionary character. As is the diplomatic effort to establish a “transitional regime” based on the military exhaustion of the opposing forces.