Today in Oaxaca city, teachers from section 22 of the National Syndicate of Education Workers, organized within the National Coordinator of Educational Workers, a dissenting sector of the union, took over a bus to go pay the electoral booths a “visit”. 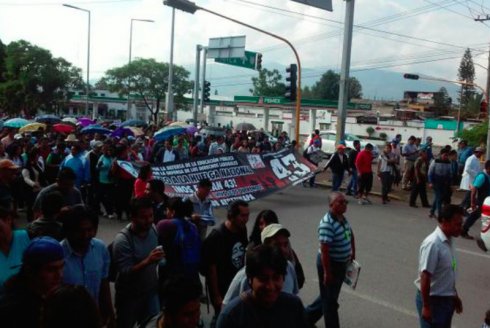 The teachers dragged all the electoral materials from the booths to the entrance of the Benito Juarez baseball field where they piled it up and set it on fire.

Meanwhile, military convoys heavily armed with anti riot equipment are heading to the National Electoral Institute Offices in Oaxaca to guard them against any possible threats.

It’s possible that the police may be preparing an operation to prevent an electoral boycott by means of repression.

Two groups from the Sierra and Central Valles regions will join together for a united demonstration.

There’s a ballot burning in front of “El Llano” park.