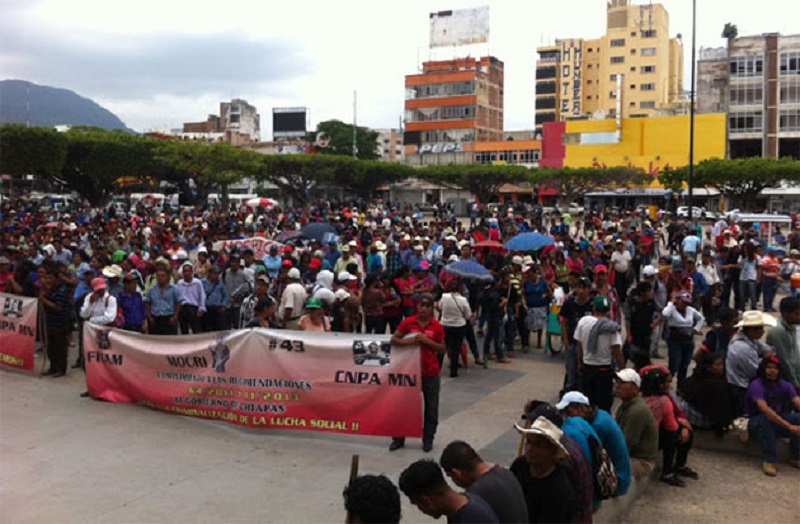 Yesterday, teachers took over radio and television stations in Chiapas in an act of defiance against Peña Nieto’s government. They took over central media stations, including the Sistema Chiapaneco de Radio y Televisión (Chiapas Radio and Television System) and the Chiapas channel.

This took place during an ongoing teachers’ strike that has garnered the support of many workers. Earlier this week, state and federal police violently evicted protesters at the teachers’ movement camp in Tuxtla Gutiérrez, capital city of Chiapas.

The teachers, who are organized within the National Coordinator of Education Workers (CNTE), demand that the national government cancel the new education reform.

What does the “education reform” do?

The education reform is actually a labor policy that will deal a big blow against teachers. One would expect education reform to grapple with the necessary number of teachers, curriculum, school conditions, materials, budget, and teaching methods. None of this is mentioned in Peña Nieto’s reform, which was crafted by capitalist groups like Mexicanos Primero (“Mexicans First,” a conglomerate of major businessmen like Televisa President Emilio Azcárraga) and the OECD.

The reform is being implemented to make teachers responsible for deficiencies in education. It requires that all teachers be subjected to strict evaluations and tested on unrelated material, with the “Law of Professional Teaching Service” exam (LSPD), a mechanism for deeming teachers “suitable” or “unsuitable.” The exam has no pedagogical basis and utterly fails to address the problems in education, which arise when the State denies the means to guarantee public education.

Most who attend public schools come from families living on precarious wages, with limited or no access to books, cultural activities, and recreation. Students are sometimes forced to work and even lack sufficient nourishment to attend and perform well in school.

The education reform is actually a labor policy that will deal a big blow against teachers.

Schools are in poor condition: overcrowded classrooms, zero infrastructure investment, a grading system that overwhelms teachers with administrative work, and the vast divide between curriculum content with reality. The evaluation of educational reform that the Ministry of Public Education (SEP) and the National Institute for the Evaluation of Education (INEE) are implementing ignores all of these factors. Instead, they pretend they can solve the problem of education through a standardized, multiple-choice test that does not measure the actual capacity of a teacher.

In some institutions, test prep courses are being offered to teachers with the claim that “good teachers need to be updated and take courses to improve their quality.” However, “quality” in this case is solely the capacity to respond correctly to questions based on case studies that do not measure teaching ability and have no definitive answer.

For these reasons, along with the rampant injustices of public education, teachers in Mexico have been fighting hard to prevent the implementation of the education reform.

On May 25, the situation became extremely tense. The teachers’ movement from the 7th and 40th district faced off with the repressive forces. They were trapped in fierce battles that lasted for over three hours. The police used helicopters and anti-riot tanks, launched tear gas, and shot rubber bullets into the crowd of teachers.

Afterward, the people of Tuxtla Gutiérrez responded with a massive mobilization of over 5,000 people in solidarity with the teacher.

In Chenalho, the neighbors took both State Congress President Oscar Eduardo Ramírez Aguilar and PVEM parliamentary coordinator Carlos Arturo Penagos Vargas hostage in response to the repression and mass arrest of teachers. They also forced the resignation of Mayor Rosa Pérez, who was accused of mishandling 50 million pesos.

In Chiapas de Corzo, after being gassed by the police, the teachers and community expelled the police forces who were taking refuge in the town’s hotels.

We are going to get rid of these dogs from the state without any pity. It is better to make them cry than to allow them to make our state of Chiapas do so.

The whole state of Chiapas is boiling with hatred for the repression perpetrated by President Peña Nieto and Governor Manuel Velasco Coello.

Videos of the repression and massive mobilizations circulated through social media sites, showing the teachers marching alongside workers from other sectors, students, and parents who came out to support the teachers’ movement. Under the the banner, “¡Fuera Peña!” (Out with President Peña!), they took over the streets of the capital of Chiapas; meanwhile, a major highway in the municipality of Ozchuc was blocked by teachers, students and parents.

There are no official counts of the people who have been arrested or injured by authorities. Social media outlets are reporting arrests, disappeared, injured and even fatalities. However, this information has not been confirmed by local officials.

The people of Chenalho circulated the following statement addressed to the state government:

“We told you that if you repressed the people and the teachers, we would take action against the congressmen and all the thieves surrounding them. This is just beginning, you damn government. Our respect to the unarmed teachers. A war is won by getting even.

“Today, the people of Chenalho are declaring war and properly armed, the people are responding. Everyone that has a way of defending themselves should do so, because today the Federal Police has injured innocent people. The people united will never be defeated.

“We are going to get rid of these dogs from the state without any pity. It is better to make them cry than to allow them to make our state of Chiapas do so.”

There must be an urgent call to create an international movement of solidarity with the Mexican teachers so that their struggle is not smashed by the repressive Mexican regime.

The education reform aims to weaken the National Union of Education Workers (SNTE) and to smash its most radical wing, the CNTE. Meanwhile, in other states and the city of Mexico, there has also been a movement of repressive forces in a coordinated effort to halt the teachers’ movement.

The SNTE is the largest union in Latin America. If the teachers are defeated and the reform moves forward, it will signal a great defeat for workers in Mexico and throughout Latin America.

There must be an urgent call to create an international movement of solidarity with the Mexican teachers so that their struggle is not smashed by the repressive Mexican regime, headed by the femicidal Peña Nieto and his blood-stained party. These actions must be taken up by all sectors of labor that call themselves democratic–in order to confront Peña Nieto’s and the local governments that use “iron hand” tactics to attack the teachers’ movement.

This article , originally published in La Izquierda Diario-México, was adapted for Left Voice with help from Óscar Fernández.