After this year’s “Teachers Spring,” educators in Los Angeles are planning to spread the rebellion of education workers to the West Coast. 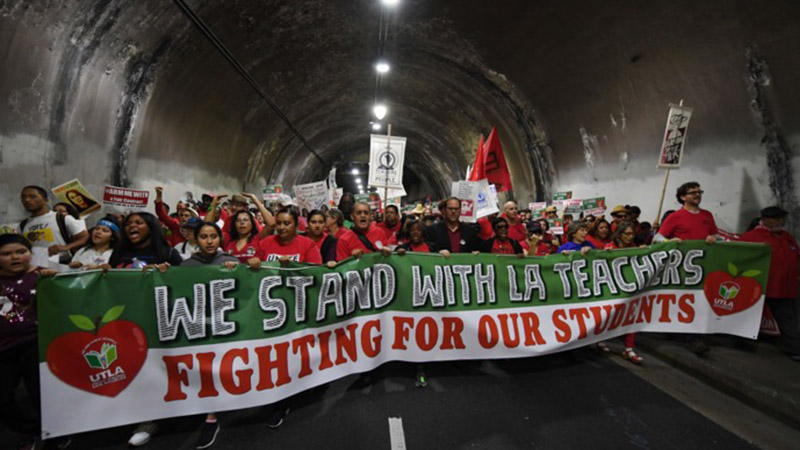 Teachers rocked much of the Mid and Southwest earlier this year with an historic wave of “illegal” education strikes — some of which won important victories. Now, the teachers rebellion may reach Los Angeles, the second largest public school district in the country. 31,000 teachers, nurses and school aids are set to strike on January 10, the first of its kind in the last 30 years. Additionally, Oakland educators may also walk out.

Left Voice salutes the militancy and determination of these school workers — predominantly teachers — who are fighting for the needs of working class children and parents. As the United Teachers of Los Angeles (UTLA) website states: “Give kids a chance — stop starving our public schools!” UTLA’s demands for better staffing, smaller class sizes and a living wage are long overdue.

The UTLA union is going up against a powerful foe that doesn’t give two shits about working class children. In contrast to the people who dedicate their lives to public education, Los Angeles schools are run by an unelected billionaire superintendent — Austin Beutner — a former investment banker and media mogul. Beutner has no experience in public education, and shouldn’t be allowed through the front door of a public school, let alone be in charge of a whole district.

Whereas schools could be effectively and democratically run by the education workers, students, parents and larger community, they are instead administered by appointed bureaucrats who are willing to implement whatever policies come down the pipeline: “Race to the Top,” the “Charterization”of public education, cuts to staffing, standardized test mania, and much else.

In cities like Los Angeles and Chicago, many workers recognize the Republican Party as the party of the rich, a party that attacks black and brown communities head-on, cuts social programs and aims to privatize everything. Predictably, elected Democrats have proven themselves to be no alternative. Mainstream Democrats are equally aligned with developers, the charter school movement, and big-money interests.

When Chicago Teachers struck in 2012, it was against Democrat Rahm Emanuel, a man notorious for closing over 50 schools. Now teachers in LA are going up against not only “Beutner the Bully,” but also Democratic mayor, Eric Garcetti. This illustrates once again that we as workers need our own political party — one that fights in the class struggle for the needs of the working class as a whole.

The UTLA’s January 10 strike date represents a challenge to the status quo of anti working class education policies. The LA teachers’ fight deserves our support. They can revive and spread the movement that started in West Virginia, Oklahoma, Kentucky and Arizona nine months ago — a movement for adequate school funding and a living wage for educators. Already, transit workers have passed a resolution vowing to “mobilize our union members to participate in UTLA picket lines” in the event of the strike.

That’s the kind of solidarity that we need to build across the labor movement — solidarity in the streets.