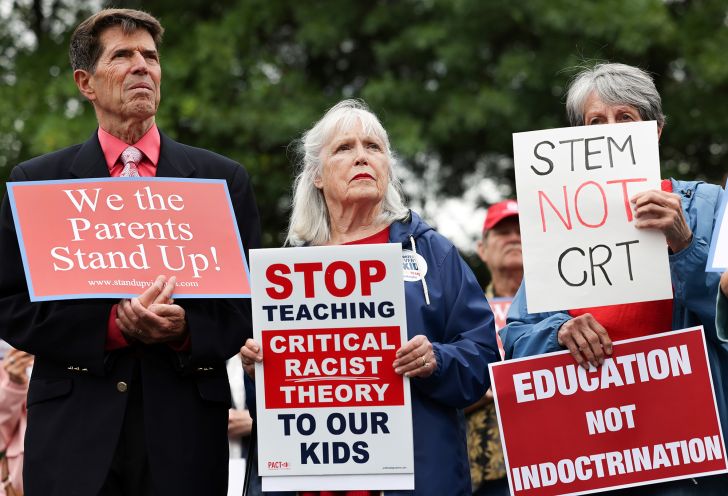 In the past few months, school boards around the country have been overrun by crowds of right wing parents and community members protesting against trans kids in bathrooms, trans kids on sports teams and against the teaching of “critical race theory” in school. This is the center of the new Republican strategy for the midterms: focus on schools. This isn’t a concern coming up organically for families. After all, Fox News mentioned “critical race theory” 1,300 times in less than four months. And Glenn Youngkin, the new governor-elect of Virginia, hung his electoral campaign on attacks on trans kids, and critical race theory (CRT).

But this isn’t just a Virginia issue; anti-trans and anti-CRT laws are being passed around the country and the Republicans believe they have found a winning issue. That means the attacks are only going to keep coming.

These are attacks on schools, on students and on teachers. We need a national struggle by teachers’ unions to fight this right wing offensive in schools.

The Attacks on Trans Kids

Attacks on trans kids in schools take many forms, from the right to bathrooms to the right to play on sports teams. Eight anti-trans sports bans have passed in the past few months in Arkansas, Alabama, Tennessee, Mississippi, Montana, West Virginia, and Texas. These laws ban trans kids from playing sports on teams that correspond to their gender. Texas’s law  was publicly litigated, and trans kids came in to plead their case. 8 year old Sunny Bryant told the Texas State Legislature: “My first visit to the Capitol should have been on a school field trip, not defending my right to exist, but if I don’t show up, you won’t see the real stories. Kids like me whose futures will be crushed, opportunities taken away even before I’m given a chance to try.” Her powerful testimony didn’t stop the bill—it passed in Texas, and others like it passed in multiple states across the country.

In Tennessee’s anti-LGBTQ education bill, passed earlier this year, school districts are required to notify parents before “providing a sexual orientation curriculum or gender identity curriculum” in any kind of instruction, including but not limited to education on sexuality. According to the Human Rights Campaign, “A district will be forced to notify parents, provide curriculum materials, and allow parents to opt students out of learning about important modern and historical events, from the A.I.D.S. epidemic to the Stonewall riots to even Supreme Court jurisprudence.”

In Virginia, a sexual assault case became the centerpiece of a transphobic right-wing smear campaign. It was originally spun as the tried-and-true transphobic narrative of a trans person sexually assaulting a helpless girl in a bathroom. In reality, the student who committed the sexual assault does not identify as trans. But this didn’t stop the Right from using this story to whip up fear of trans people and bringing back “bathroom bill” rhetoric which keeps trans people from using the correct bathroom—subjecting them to greater threats of violence. School board meetings have become the center of these battles in Virginia and all over the country. Just a few days ago, a California school board meeting was bombarded by religious leaders and right-wingers who spoke out against the right of trans kids to use the bathroom.

Clearly, the right wing is up in arms about sexual assault only when they can employ it as a weapon against trans students — certainly not when Brett Kavanaugh or Donald Trump does it. Glenn Youngkin is only concerned with sexual assault when it can win votes by creating fear around the spectre of trans kids in schools.

Attacks on Teaching about Racism

In the minds of right-wing bigots, protecting trans kids and the teaching of “critical race theory” go hand in hand, threatening innocent children all over the country. Small groups of right-wingers have taken school board meetings by storm to shout about this issue—it’s an issue that surfaced in the New Jersey and Virginia gubernatorial elections, as well as in many local school board elections. While right-wingers call it “critical race theory,” what they are actually protesting is the teaching of basic U.S. history in schools.

Some of the people storming school board meetings aren’t even parents at all. Take Mladen Chargin, who attended a school board meeting in rural Nevada, despite having no children in the school system. Chargin argues that “the only purpose [of Critical Race Theory ] is the division and destruction of the United States. That is the purpose.” In West Bend, Wisconsin, a woman who spoke before the school board called CRT “divisive, biased, radically left Marxism designed to further alienate our American children from each other.”

Already, schools are banning CRT in states including Idaho, Iowa, Oklahoma, Tennessee, Texas, New Hampshire, Arizona, and South Carolina. In actuality, Critical Race Theory is a legal framework that students have discussed in university classrooms for the last 40 years. But that’s not what these bans are about. These laws bar teaching the ugly truth of American history and the resistance of oppressed people, parts of history that are already woefully absent from school curricula.

As a report by America’s Promise Alliance shows, “While police violence, protests, and calls for racial justice have occupied the public discourse in communities across the country, many students continue to lack access to opportunities to discuss race and racism within their classrooms.” Only 56 percent of students said they discussed race and racism “sometimes or a great deal.” Only about three in five students reported that their school curriculum represented nonwhite communities “sometimes or a great deal.”

And as “critical race theory” gets banned from schools, discussions of racism will become even more marginalized.

English teacher Mike Stein told Chalkbeat Tennessee that as a result of the new law, “history teachers can not adequately teach about the Trail of Tears, the Civil War, and the civil rights movement. English teachers will have to avoid teaching almost any text by an African American author because many of them mention racism to various extents.”

These right-wing attacks are attacks on teachers—on the ability to teach accurate history in the classroom. They are an attack on oppressed people: on trans students who will be denied basic rights at school, and on students of color who will continue to receive a disgustingly whitewashed version of history.

These laws are having the intended chilling effect: teachers are scared of losing their jobs. The laws against teaching about LGBT issues and critical race theory are written so ambiguously that they can essentially be used for anything. Teachers are already being fired, and many more are scared to lose their jobs. In Tennessee, a high school teacher was fired after teaching Ta-Nehisi Coates’s essay “The First White President” and showing a video of the spoken-word poem “White Privilege.” A Black principal in Texas was recently suspended without explanation after a former school board candidate complained that he was promoting Critical Race Theory and held “extreme views on race” and “the conspiracy theory of systemic racism.”

And these attacks aren’t going anywhere.

Now that Youngkin has won the Virginia gubernatorial race, largely by employing the fear of trans kids and critical race theory, these attacks will only multiply. They are the centerpiece of the Republican electoral strategy going into 2022, and they will be at the center of Donald Trump’s possible presidential campaign. While the Democrats will gladly denounce the Republicans, they haven’t taken any significant action to defend trans rights or the teaching of true history in schools. Instead, the Obama administration had its own version of attacks on the study of history. Under Race to the Top there was an huge expansion of the use of racist standardized tests with a focus on Math and Reading. As a result, history continued to be cut from curricula across the country.

Teachers’ unions must put up this fight, for teachers, for students and for the future of the education system. The American Federation of Teachers and the National Education Association represent millions of teachers. They loudly proclaimed that Black Lives Matter last year during the uprising. But now, they must step up. The AFT and the NEA—both national education unions—must put up a national fight, uniting with LGBTQ+ rights groups and other community organizations that address immigrants’ rights, racism, and Black liberation. These are issues that unite us and it’s time to organize in our workplaces and it’s time to take the streets. The right wingers to attend school board meetings are minuscule compared to the united power of teachers unions and community organizations invested in trans rights and the teaching of history in school. It’s time to show it.

Teachers’ unions must fight for teachers’ as well as students’ rights. They should demand that all students have equal rights and protections in schools, including the right to an education that does not brainwash students with pro-American propaganda, but tells the truth about oppression and exploitation.