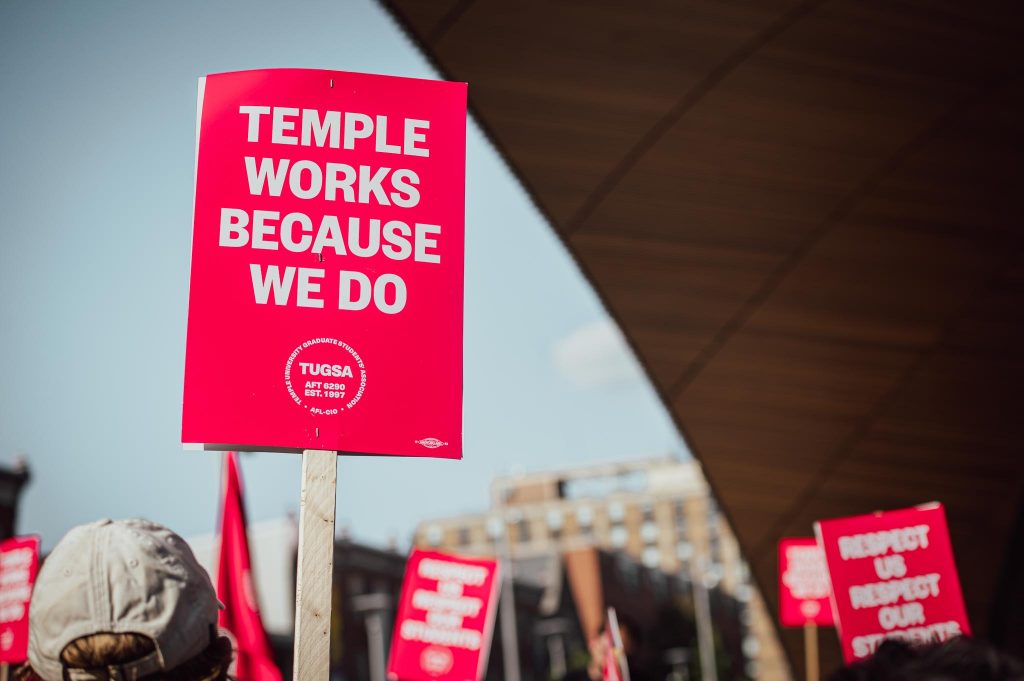 The surge of strike energy has reached Philadelphia. Just a few weeks after Philly’s art museum workers struck and won, this past Friday Temple University’s graduate students voted overwhelmingly to strike — by a margin of 99 percent.

Contribute to their strike fund here

TUGSA — Temple University Graduate Student Association — represents about 750 Teaching Assistants (TAs) and Research Assistants (RAs) across the campus. They’ve been negotiating for 10 months, and working without a contract since February. They’ve been stonewalled by Temple’s bosses.

TUGSA is demanding badly needed changes to their pay and working conditions. Looking at Temple’s own math on its new anti-union website, grad student workers and RAs make just $20,000 a year in a city where average rent is around $1,900 a month. That means yearly rent would be, on average, $22,800 — $2,800 more than the entire yearly stipend.

The situation is only getting worse in an economy with skyrocketing inflation, especially in the price of food and gas. This means the last year of inflation alone brought major pay cuts for grad student workers, some of the most precarious workers at Temple. So TUGSA is fighting for a 50 percent pay increase in the first year, with 6 percent increases each of the three subsequent years, along with subsidies for childcare and for transportation.

For its part, Temple is flush with cash. In 2020-2021, the most recent year for which public data is available, Temple made about $165,000,000 in profit, about $80,000,000 more than the previous year. The president alone makes about $1 million a year. It’s in this context that the bosses are laying off adjuncts en masse and demanding huge pay cuts from graduate students.

Temple University bosses are refusing to negotiate. They’re offering 2-percent wage increases in the first year of the new contract and fractions of that for the next few years. In other words, Temple’s administrators are demanding massive pay cuts after inflation — and they’re refusing to discuss any other issues.

Now, the university’s bosses have opened the floodgates on union busting. Their union-busting playbook comes from their lawyers at Morgan Lewis,the same firm the Philly Art Museum hired in their failed fight against the museum union.

Temple’s administration is threatening to strip grad students of their health insurance, and threatening international students by suggesting they could be deported for striking (this is not true: international students have the same rights to participate in union activity). They’re also asking undergraduates to report any TAs that strike. They’ve set up a new union-busting website and they’re directing students there.

But that flood of union-busting alone is proof of the power a strike would have on the university. In fact, Temple recently negotiated a deal with the university’s nurse’s union — probably a sign that they feared a strike across both bargaining units that could link up.

One of the main reasons a strike at TUGSA Temple could be hugely disruptive — and win major concessions — is its leverage.

Another reason the strike could wield major power is the potential for other Temple unions to join in.

My own union, TAUP, organizes 2,000 of the teachers and librarians across the university. In other words, TAUP would add major weight to the scales of the fight, and could be the difference when it comes to wringing major concessions from the administration.

But our union leaders in TAUP are walking on eggshells. The union leadership emailed us that we should be prepared to cross the picket line to fill in for graduate students’ classes if necessary. That leadership is trying to toe the legal line — like the “no strike” clause in our contract — in fear of reprisals.

But for the sake of our own union, we have to fight side by side with TUGSA. TAUP is already in a contract negotiation year. Already, the bosses are flexing their muscles, firing adjuncts en masse. The chances of a good deal at this point are tiny. But if grad workers win — like with major wage increases outpacing inflation — it raises the floor for us, and makes a far better new contract possible. If the grad students don’t win, the university’s bosses will be all the bolder in attacking us.  And crucially, no-strike clauses are designed to do exactly this: to stop workers from using our power together to win.

Our real power to stand in solidarity will almost definitely have to come from below, from rank-and-filers who organize ourselves across our bargaining units. Those rank-and-filers could meet up and coordinate with TUGSA and with undergrads, and creatively find all sorts of ways to refuse to cross the picket lines.

That could mean any number of things. Solidarity between teachers and TUGSA could mean outright, coordinated walkouts and wildcat striking. TAUP members could also refuse to scab by “teaching” grad students’ class, but simply having class “outside” — where the picket lines happen to be. And it could mean “working to rule”: if TAUP members are told to scab, we have the legal right to negotiate what that means. Negotiations could be demanded immediately, and dragged out indefinitely, during class time. But we will have to organize ourselves and link across bargaining units to take these steps.

Undergrad students will have a big role to play in all this. The Temple administration is trying to weaponize them against TUGSA, making them informants and strike breakers who blame grad workers for striking. But students have nothing to gain by siding with a massive, and massively expensive, Temple bureaucracy. Temple’s bosses are increasing tuition even as Temple makes enormous profits year-on-year. This tuition pays for a president who makes over a million a year; a few dozen deans and vice presidents that collectively make millions; and massive building projects that help the leaders’ prestige and displace the majority-Black surrounding neighbors but do little for students.

In fact, undergrads can play a decisive role in supporting a strike. At Columbia and Barnard, for example, undergrads organized en masse to use their meal cards to bring food to the picket lines.

But graduate student workers are perfectly situated — with TAUP allies — to win over the students to the strike. We see them in class two or three times a week and can invite them to rallies and picket lines.

As a strike looms, a question does too: How can TUGSA and TAUP link up, and win over the students as allies, too? How can we  coordinate and organize ourselves to build strong TUGSA pickets and stop people from scabbing?

One option — which strikers have often used — is open, outdoor meetings or assemblies at the picket lines each day. Those would be easy places where students and rank-and-filers of different unions could “plug into” the struggle. They’d be places where those different sectors of campus could organize ourselves and coordinate our efforts, figure out how to mobilize more people, strengthen the pickets, and find ways to stop workers and students from crossing them.

Now is the time for every TU union, and every TU union member, to link up, win over our students, and get ready to stand shoulder to shoulder with TUGSA on the picket lines.