Over 40 Black Lives Matter actions occurred around NYC on Juneteenth, bringing tens of thousands to the streets. 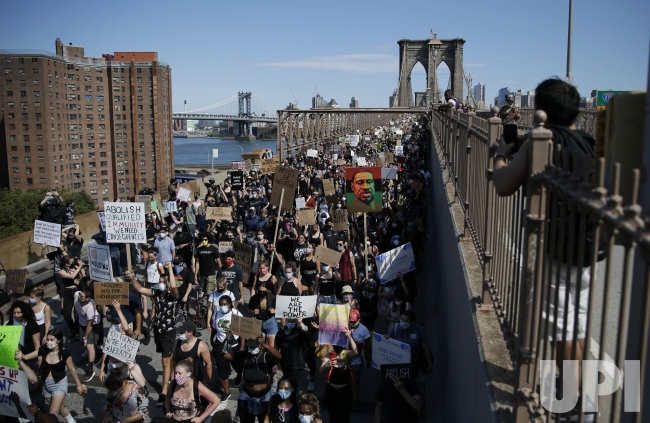 Juneteenth commemorates the ending of slavery in the United States— the day that Union soldiers, led by Major General Gordon Granger, landed in Texas to announce that the Civil War had ended and enslaved people were free.

In New York City and around the United States, there have been three weeks of mobilizations against police brutality and for Black lives. Juneteenth was an extraordinary explosion of larger mobilizations across the city. Hundreds of thousands took the streets in well over 40 actions in different corners of New York City. In every borough, marchers took the streets, gathered in parks, and organized vigils to both commemorate Juneteenth and protest racism and anti-Black violence,.

By 11 AM, there were already protests in Jackson Heights, Brooklyn and Harlem. By noon, there were seven more. One protest marched through Central Park, stopping where the Central Park Five were arrested for a moment of silence. Protesters pointed to the fact that the racist system includes police murders of Black people, as well as the injustice system that systematically locks up Black people. Fifteen more events started between 1 and 1:30 pm all over the city. At 2 pm, fifteen more. Around the city, marches converged and became bigger throughout the day.

A group of Muslims and supporters gathered in front of Gracie Mansion, the mayor’s official residence, for Jum’ah (Friday prayers), chalking, and an abolitionist open mic, during which organizers and speakers pointed out the NYPD kills Black people and surveils Muslims of all races, and that the only way to fix it was to abolish it. Proving their point, there was almost a 1:2 ratio of cops to people praying, and throughout the prayers the cops kept adding barricades, blocking out people who wished to join in prayer or protest, but letting through the mostly white residents of the ritzy apartment building across the street.

In Manhattan, the NYC Defund the Police Contingent, organized by DSA AfroSocialists as well as NYC Fight for Our Lives Coalition, rallied in front of City Hall, numbering well over a thousand. Their demands include defunding the police, cops out of our unions and schools, abolish the police, and re-investing in communities.

Their contingent ended at a People’s Assembly. Community members and organizers spoke in favor of defunding the police, and about the underfunding of hospitals and schools in Black communities. Others spoke out against the Democrats and Republicans, both responsible for police brutality and the overblown police budgets. Khalil Smalling  of the DSA Afro Socialist Caucus and Red Bloom powerfully read a poem, saying “When will we Workers see, that all our power rests in the chains that bind us together?”

Khalil of @AFROSOCDSA and @NycRedbloom kills it: ““When will we workers see that our power rests in the chains that bind us together. We the people are done waiting.” #junteenth #nycprotests pic.twitter.com/2DJbTpLjr5

Another speaker said “Trans women are being killed at astronomical rates. We don’t hear about it because CNN doesn’t want to cover it. So I just want to remind you that as we are protesting, we mean all Black lives.”

Luigi Morris of Left Voice spoke about the international repercussions of the Black Lives Matter movement, which has inspired mobilizations around the world, as well as the ILWU strike that shut down ports in California. He ended by saying “The elections are coming and the two options that we have– one is calling to shoot people and the other is calling to shoot people in the knee. We can’t trust in any of them. The movement has the task of building our own organization.”

Afterward, the march joined up with another march and in the hot NYC sun, kneeled in silence for 8 minutes, remembering, the 8 minutes that cops kneeled on George Floyd’s neck. As the 8 minutes ended, Strange Fruit came on the loudspeaker, reminding people of the six people of color, five of them Black, recently found hung from trees across the country.

Later in the evening, at Brooklyn Bridge Park, the Dyke March held an event in honor of Black Lives Matter entitled “Break the chains with love,” with a drumming circle and speakers that then marched through the streets of Brooklyn. In other areas of the city, people played live music from the back of pick up trucks. In Highland Park, a Black Lives Matter concert was held. By 7 pm, a group had taken the Williamsburg Bridge and another was on the Brooklyn Bridge.

In the evening, a vigil was held in Prospect Park to remember the Black women murdered by a racist, patriarchal society. Hundreds gathered near a tree with Black women and nonbinary people at the center to remember those murdered including Nina Pop, Breonna Taylor, Atatyana Jefferson and most recently, Oluwatoyin “Toyin” Salau.

An opening speaker said, “DeBlasio said Juneteenth is declared an official holiday in NYC and while he claims he wants to make Black struggle visible, he continues to allow the murder and violence against Black women, trans women, Black girls and TGNC comrades go invisiblized… If you really stood with us, there is no way you would allow a faulty healthcare system to exist. And if you really stood with us, you would have canceled the rent.”

On the other side of the city, at an Amazon warehouse in Queens, Amazon workers, members of community organizations, and other activists gathered to give speeches and protest the role that the company plays in the exploitation of Black workers and workers across the world as it rakes in billions of dollars in profits for its executives. The demonstration was a powerful act of solidarity between the labor movement and the mobilizations in the streets calling for justice and an end to institutionalized racism. The event was meant to “remember the lives lost under the exploitation of Amazon and those who have fallen victim to the violence of police that Amazon supports.” Jonathan Bailey, one of the main organizers of the event, said, “Amazon oppresses people inside the warehouses and outside of the warehouses. There is a strong connection between the exploitation and violence of slavery enacted on Black bodies on and off the plantation and the exploitation and violence that Amazon enacts in the warehouse and through policing outside the warehouse.”

The fight against racist police terror is the fight against the capitalism, which continues to exploit and kill Black people at disproportionately higher rates.#BlackLivesMatter pic.twitter.com/NuIPw6TL40

As night fell in New York City, fireworks filled the sky. It is clear that gone are the days of asking for permits for marches or marching on the sidewalk. Gone are the days of the cops not allowing us to have megaphones or us allowing them to bully us into tight spaces at marches. On Juneteenth, hundreds of thousands took the streets to fight anti-Black violence. It’s hard to imagine the city ever being the same.