Thanks, But No Thanks: The Implications of the Black Lives Matter DNC Rejection

Black Lives Matter rejected the Democratic National Convention’s endorsement of the movement. This is a positive step towards political independence, but not the complete break with capitalist parties that we need for the liberation of Black and all oppressed people. 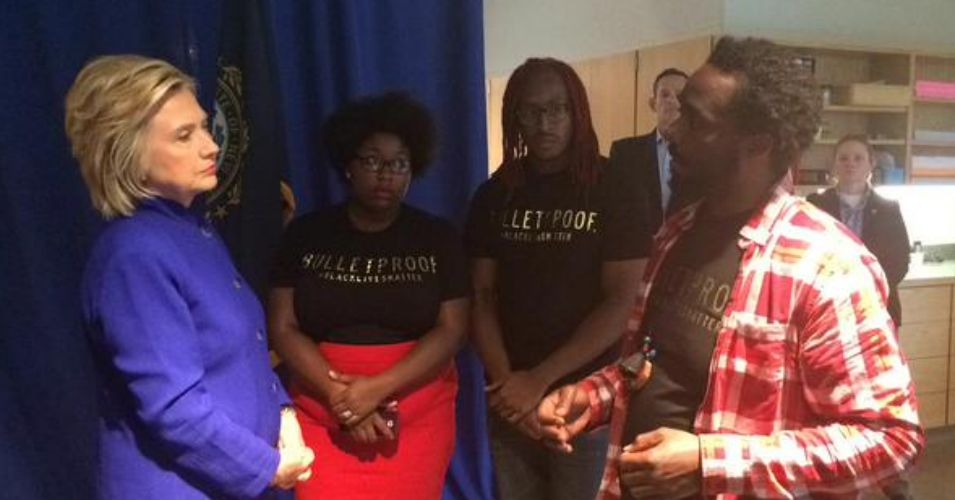 The Democratic Party also has a history of using the rhetoric of social justice movements for the purpose of co-opting them. The Democratic Party is the graveyard of once-independent and combative political movements — transforming militants into functionaries. They have done this with the Civil Rights movement of the 1960’s as well as the women’s and LGBTQ movement. More recently after the massive protests of 2006, many immigrants rights activists became tools of the Democrats to convince Latino voters to support Obama, only for him to deport more immigrants than any other president in US history. This year’s Democratic National Convention (DNC) passed a resolution “supporting Black Lives Matter”. They also endorsed the hashtag #SayHerName created around the death of Black cis and trans women at the hands of law enforcement. The endorsement is not a step towards real action, but instead an attempt at co-optation.

However, BLM rejected the endorsement and responded in a press statement released on August 30 from the “Black Lives Matter Network, including 26 chapters nationwide:

“A resolution signaling the Democratic National Committee’s endorsement that Black lives matter, in no way implies an endorsement of the DNC by the Black Lives Matter Network, nor was it done in consultation with us. We do not now, nor have we ever, endorsed or affiliated with the Democratic Party, or with any party. The Democratic Party, like the Republican and all political parties, have historically attempted to control or contain Black people’s efforts to liberate ourselves. True change requires real struggle, and that struggle will be in the streets and led by the people, not by a political party.

More specifically, the Black Lives Matter Network is clear that a resolution from the Democratic National Committee won’t bring the changes we seek. Resolutions without concrete change are just business as usual. Promises are not policies. We demand freedom for Black bodies, justice for Black lives, safety for Black communities, and rights for Black people. We demand action, not words, from those who purport to stand with us.

While the Black Lives Matter Network applauds political change towards making the world safer for Black life, our only endorsement goes to the protest movement we’ve built together with Black people nationwide — not the self-interested candidates, parties, or political machine seeking our vote.”

BLM’s rejection of the endorsement demonstrates their willingness to be politically independent. Rarely is the Democratic Party called out by a national progressive force. BLM denounces the historical attacks on Black people that have been executed by both of the two capitalist parties. It shows that a statement of endorsement by the Democratic Party is not enough for the BLM to beholden itself to the party and it assures that BLM is willing to continue to disrupt all candidates’ events and rallies.

It is clear that both the Democratic and Republican parties historically attempted to contain and pacify Black-led liberation movements. However, the attack on all political parties is not historically correct. A well-known example is the Black Panther Party for Self-Defense (BPP). Although the BPP made serious political mistakes and had many shortcomings, their efforts did not “contain” Black liberation struggles. The BPP in fact organized consciously against police terror, racism and capitalism. In the form of a political party with a political line that was clearly anti-capitalist and anti-imperialist, they organized Black people and posed a threat to capitalism.

However, the BLM Network did not shut the door on an endorsement from the Democratic Party. The statement is “demanding action not words”, which suggests a call for more concrete reforms and a confidence that it is at least possible for the Democrats to deliver. It also leaves the door open for stopping disruptions of the candidates if their actions are “more concrete”.

There can be no hope for Black liberation through any political party with capitalists, cops and bigots as members. Loose affiliations or networks such as the structure BLM has created can have a benefit of spontaneous tactics and a variety of opinions under one movement. However, the political organization or party as a form is not what has maintained the racist oppression of black people. The BLM statement is a challenge to the Democrats to do better through “action” rather than a recognition that it is impossible to achieve the liberation of Black people against oppression through the capitalist Democratic Party. The Democratic party is bankrolled by the same banks (JP Morgan, Chase, Wells Fargo) that created the housing crisis, which affected Black homeowners more than any other group.

The Democratic Party has always been one of the two parties of the wealthy—a party that has consistently supported the racists cops that kill black people, deported immigrants in record numbers, and kept millions of people of color in misery.

BLM states, “Our endorsement is in the protest movement we have built”. The reason why the Democratic Party is addressing the issue of police terror, institutionalized racism and Black Lives Matter is because of the protest movement built by BLM and numerous growing, already-existing, and past social movements of the oppressed.

In truth, the Democratic Party has been forced by BLM direct actions, street disruptions and its national combative character to pay attention. However, this movement can not be a bartering chip to win this or that reform. For the liberation of Black people and all oppressed people, we must build a movement that is specifically anti-capitalist and destroy any illusions in the Democratic Party or any capitalist party.

The reformist strategy of pressuring the party of our enemies can only yield some modest gains as long as the mood is furious. When a movement wanes, the Democrats roll into action and disappear any independence and later, remnants of the movement’s existence.. The “pressure strategy” is not the correct long-term strategy capable of ending the system altogether. The long-term strategy must be to build a revolutionary political party excluding the capitalists and the bosses. We must build a party of the working class that represents the needs of the working class and all oppressed people.

BLM and all movements of the oppressed must break with the Democrats completely. There are many promises and even reforms that can be enacted within the capitalist system, but the liberation of Black people, working class and oppressed people will take place when we form an anti-capitalist political party in our own interests independent of the bosses, bigots and the State.

A Few Words on Bureaucracy

In political movements such as the Civil Rights movement and the more recent immigrants’ rights movement, there are those who who defend the system, though they may be critical of some aspects. Some have made their careers from being leaders, to negotiators, and later to gatekeepers of the system.

These “social movement bureaucrats,” also called “comprador leadership,” are willing to strongly criticize the police, but are also close to the political establishment that is based on police racism and inequality. Their power comes from being seen as a voice to calm rebellion. They are quick to claim that “not all cops are bad”. Examples of this within the fight of police terror are self-appointed leaders, Al Sharpton and Jesse Jackson. There are local bureaucrats of the same type in different cities. Often, they state that the rebellion is caused by “outsiders” and similar to the union bureaucracy, use physical intimidation tactics when criticized.

They also deflect criticism from political disagreements, writing them off as “personality” and “ego” issues. This is to avoid answering challenges against the truly reformist politics they espouse. These self-appointed leaders look to make deals with the police, even while denouncing them. They call for meetings with the police and city officials to barter the militancy of the movement. They may criticize the police or the capitalist parties, but in the end their answers of “tough choices” are only to bring people back into the system.

Forming an anti-capitalist political party as opposed to relying on the Democrats is necessary to maintain independence. When movements wane, the principles of the party continue. The Democrats promise and deliver only when the spotlight is on them and then retreat, claiming impotence. The pressure strategy is not the long-term strategy that will end the system altogether. The long-term strategy must be to build a political party excluding the capitalists and the bosses. We must build an anti-capitalist political party of the working class that represents the needs of the working class and all oppressed people.