The Anti-Quarantine Protesters Are Serving the Interests of Capital

In Michigan and other states, thousands of right-wingers have taken to the streets demanding that businesses and schools be reopened. They might look like a few lone conspiracy theorists, but they are being financed by billionaires and cheered on by the Wall Street Journal. 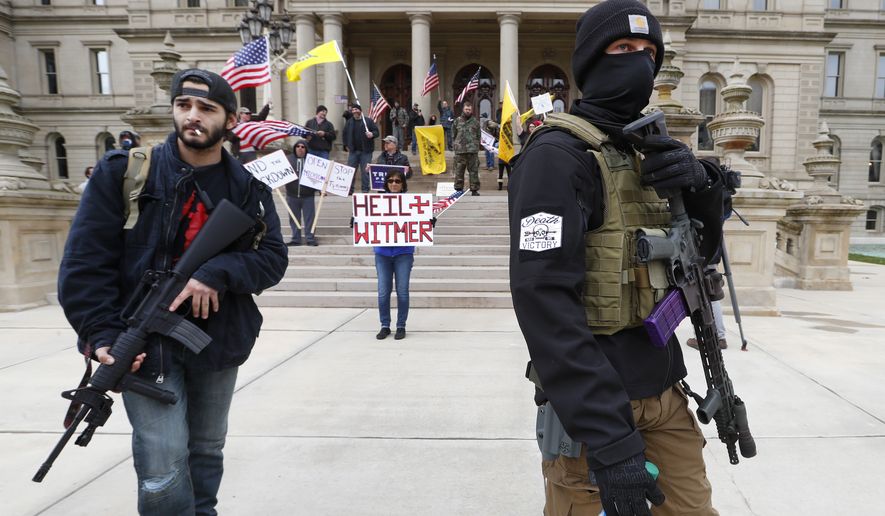 In Michigan’s capital city of Lansing on April 15, 3,000 to 4,000 protesters joined “Operation Gridlock.” Led by groups backed by billionaires as well as by proto-fascist groups such as the Proud Boys, they gathered to demand an end to the emergency confinement measures ordered by Michigan’s governor. They want business and schools reopened. It is, they say, a matter of their freedom and liberty. At the same time, Michigan has the third highest death rate as a result of COVID-19 in the nation, with state officials reporting 30,023 confirmed cases of the virus, including 2,227 deaths.

The call went out from organizers to cause traffic jams and bring signs they could display from their cars. The Facebook invitation warned: “Do not park and walk — stay in your vehicles!” It seemed they were blissfully oblivious to the fact that the traffic jam prevented some health workers from arriving on time for their shifts at a downtown hospital. Or perhaps they didn’t care. Many of these people are coronavirus deniers. They parrot early Trump statements about it being “just the flu.” Or worse yet, they believe the conspiracy theory that coronavirus is a hoax being used so Bill Gates can implant chips in people at the hospital.

But simple gridlock wasn’t enough. Many left their cars for a self-organized death march to the steps of Lansing’s town hall, where they unfurled American flags, “Don’t Tread on Me” flags, Trump campaign banners, and even some Confederate flags. Michigan is an “open carry” state, and many of those on the capitol steps were armed — including with assault rifles. In what screamed contradiction, some of the protesters wore N95 and other protective face masks, and not to hide their identity.

These protesters are almost exclusively white, in a state known for its deep racial inequities. Before the pandemic even began, unemployment of Black people was almost double that of white people in Michigan. These figures have only been exacerbated as the pandemic advances. In predominantly Black Flint, there is still no clean water. In Detroit, water shutoffs continue. And Black people are dying at a much higher rate than white people of the virus. Just a few days ago, Black people, who make up 14 percent of Michigan’s population, accounted for 33 percent of the confirmed virus cases and 40 percent of the deaths.

This protest was a manifestation of Donald Trump’s murderous politics of reopening the economy, as well as his weeks of denial about the severity of the virus. To that end, he has fueled the fire of his ultra-reactionary base: science-deniers, xenophobes, and racists rallying around the call to “take our country back.” Although the protesters were ostensibly demonstrating to demand that the state be reopened, in this broader context a march of gun-carrying, Confederate flag-waving white people has clear racist implications.

Whatever else one might think of Gretchen Whitmer, Michigan’s governor, what she said in an interview on MSNBC the next day is true. The rally “wasn’t really about the stay-at-home order at all. It was essentially a political rally, a political statement that flies in the face of all of the science, all of the best practices in the stay-at-home order that was issued.” She also mentioned that “the cars were blocking one of our hospitals so an ambulance literally wasn’t able to get into the bay for ten minutes. This is the kind of behavior that extends the need for stay-at-home orders, that spreads COVID-19, that overruns communities, and this is precisely the worst thing that could have happened today.”

Donald Trump’s response to the actions in Lansing was exactly what you would expect. At his daily press briefing on April 16, he was asked what he would say to those protesters. He began by mentioning that it “isn’t wonderful to stay at home.”

Asked by ABC news specifically about those who are not complying with instructions from local authorities, Trump couldn’t resist making it about himself saying, “I think they’re listening. I think they’re listening to me. They seem to be protesters that like me …” And in this, Donald Trump is right: these protests are being encouraged by the president.

This was confirmed on April 17, when he tweeted his support, calling for Michigan and other states where similar protests have happened to be “liberated.”

For Donald Trump, as well as for the capitalist class, these protests are key. In the midst of a vast social consensus around shutting down nonessential industry, as well as fear about the virus, the capitalists want to save big business. The debate about “the economy versus health” abounds. These protests are Trump mobilizing his base to tip the scales and open the economy, parroting the calls by politicians and capitalists for the working class to be sent to die for their profit. And it’s this base that will mobilize against any aid to working-class people and people of color. In this sense, these mobilizations are very dangerous.

Right-Wing Polarization in the Crisis

Trump’s responses are absolutely a reflection of his malignant narcissism at work. But it’s more than that. Even before the coronavirus pandemic, there was already a massive crisis of the regime: the 2008 economic crisis was not resolved, with unemployment and sub-employment characterizing the U.S. working class. Establishment political parties suffered a crisis of legitimacy, unable to provide a clear plan forward. Nancy Fraser argues,

“It is as if masses of people throughout the world had stopped believing in the reigning common sense that has underpinned political domination for the last several decades. It is as if they had lost confidence in the bonafides of the elites and were searching for new ideologies, organization and leadership.”1

“Because masses of people no longer trust their traditional leadership, new formations emerge in the form of left- and right-wing populism. Gramsci says that during an organic crisis ‘a great variety of morbid symptoms appear.’ Slavoj Žižek’s translation of this quote calls these ‘morbid symptoms’ monsters, and that seems appropriate. Trump is one of those monsters.”

In the context of the coronavirus, mass unemployment and modern-day breadlines, this crisis is becoming exacerbated. These right-wing mobilizations clearly represent a further polarization in light of the crisis. The capitalists are explicitly saying that people should die to keep the economy open, and Trump’s radicalized right-wing base is mobilizing around this program.

Trumpism grew in Michigan as a result of using racist and xenophobic explanations in response to the lack of good jobs, and Trump eeked out a victory there in 2016. The pandemic is showing itself to be a breeding ground for right-wing reaction in a context of economic misery: as of March 17, reports USA Today, roughly 21% of workers in Michigan have applied for unemployment benefits over the past four weeks”

Now we have armed citizens, some of whom come from Michigan’s well-known right-wing militias, protesting under the sponsorship of groups such as the Michigan Freedom Fund, funded by Betsy DeVos and her family of conservative crazies. Support for these kinds of protest actions is a tool in the ruling-class arsenal, especially as they face a massive economic crisis.

Think about this in the context of what the capitalists want more than anything right now — to open the country back up, to get people back to work so they can resume their exploitation and accumulation of capital. From Trump’s press briefings to CEOs statements, we are reminded every day that they value those things over human life. This is compounded by moves across the globe to take advantage of the pandemic to impose more and more of a police state, using the vehicle of emergency measures to get ready for the class struggle eruptions that are boiling just below the surface.

There will be more of these kinds of right-wing actions. There have already been similar protests in several other states, including California, Florida, Idaho, Maryland, Minnesota, New Hampshire, North Carolina, Ohio, and Virginia. Conspiracy theorist Owen Shroyer, who hosts a show on the right-wing Infowars website, held a “You Can’t Close America” rally in Austin, Texas, on April 18. “It’s time for citizens to stand up and take our country back,” he declared on his April 14 broadcast, “Just like President Trump promised during his inaugural address.”

Telling viewers he didn’t fear Covid-19, he added, “Are we in martial law right now? Because we’re acting like it.”

This kind of organizing mobilizes a certain social base that the right-wing, going all the way back to the Tea Party days of the Obama administration, has been preparing. It was largely funded behind the scenes by the Koch brothers and others who saw an opportunity to divide working people and advance their own libertarian agendas so they could increase their rates of profit.

Now, as Trump uses this kind of organizing to prop up his own authoritarian demagoguery, the same forces that backed the Tea Party with millions of dollars are surely at it again. They use the anti-science rhetoric, pumped into this base, to foster climate change “denial” — because actually confronting climate would present a challenge to capitalist profits. They push anti-evolution theories, not only because that allows local school districts to adopt “creationist” textbooks, but because anything that promotes religion over science fuels their attacks on public health programs and reproductive rights, and provides the basis for closing clinics and underfunding hospitals. And they use racism, as they have always done, to ensure the hyper-exploitation of a Black and Latinx working class and ensure that working-class people do not unite to confront our common class enemy.

Although these protesters look very different from well-groomed capitalists in their suits, they are peddling the same message as the pages of the Wall Street Journal: it’s time to open up and get to work. In fact, the Wall Street Journal explicitly supported these protests in a favorable article about the protests against Michigan’s “draconian lockdown.” The WSJ podcast Potomac Watch talked about having “a lot of sympathy” for the protesters.

You can be sure that the capitalists are busy at work strategizing about how to use these right-wing protests, and the ones to come, to mobilize not just against the confinement measures but also to advance a broader agenda that stands in opposition to the interests of the working class and the oppressed.

The working class, while opposing these mercenaries of capital, should not place any trust in liberal capitalist governments. We need our own program against the Covid-19 crisis. This means fighting for workers’ control to shut down all nonessential work. It means retooling industry to manufacture desperately needed protective gear. We need a quarantine wage for everyone living in the United States, including the undocumented, paid for by the capitalists. We need a moratorium on rents, but also state credits to support small businesses that are facing ruin. And we need to extend the shutdown of all nonessential labor — which is precisely what the capitalists fear the most, which is why they are mobilizing their right-wing minions against it.