The votes are in: workers at LDJ5, an Amazon warehouse in Staten Island, have voted against unionizing amid threats and intimidation. We shouldn’t normalize or accept these kinds of anti-union tactics. We need to organize a national fight against union busting. 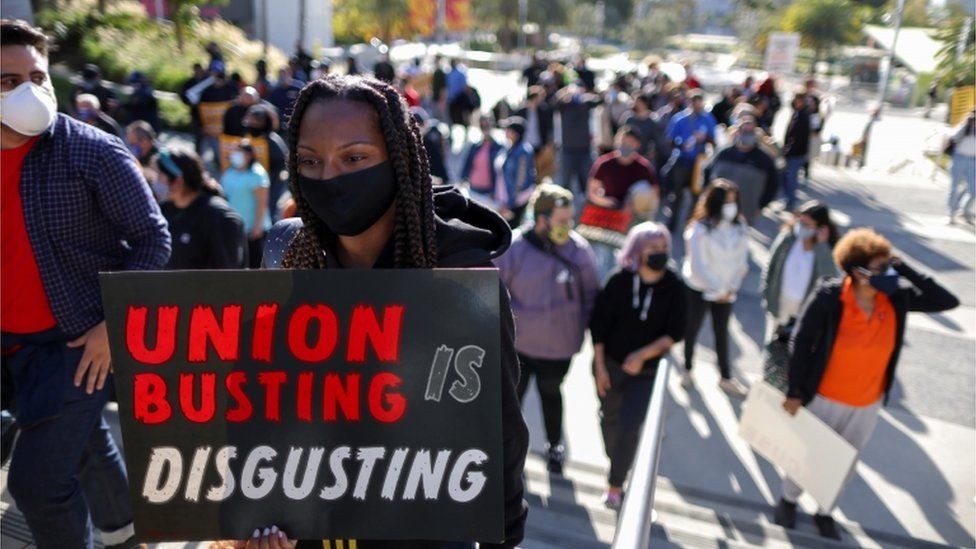 Jeff Bezos and his flunkies lost that fight, but they have since doubled down on their union busting tactics, and dedicated themselves to making sure that workers don’t succeed again. They launched a full-scale union busting campaign at LDJ5, the warehouse right across the street from JFK8, which voted on whether to unionize last week. Bezos and Amazon, which is hugely subsidized by federal and state governments, spent millions upon millions to try to break the union, slandered union organizers, and intimidated workers with threats of firings and reprisals. Today, the results came in and the majority of workers voted against the union.

Despite the loss, the union and the workers say they are determined to continue the fight.

“We shouldn’t be discouraged at all. We have a hundred building throughout the U.S. that want to organize and want to unionize. We already set the tone at JFK8, so we just got to continue, that’s all its about,” said Derrick Palmer, one of the lead organizers of the Amazon Labor Union (ALU).

Regardless of what the ballots say, it is clear that the vote and the low turnout at LDJ5 does not represent the actual interests or desires of the workers but is the result of months of various forms of legal and illegal intimidation, and a focused campaign of manipulation on the part of Amazon to defeat the union.

“All those union-busters that were there to union-bust 8,000 workers at JFK8 have walked across the street and are in our little building of 1,600 people,” Maddie, a worker at LDJ5, explained at a press conference before the vote. One organizer said there is a 1:15-person ratio of union busters to workers. He explained that workers are scared to even talk to union organizers for fear of being fired.

“They’re really fighting us, and they’re playing really dirty,” Maddie said before going on to explain the sexist and homophobic rumors being spread about her, as well as the racist rhetoric used to talk about Chris Smalls.

Anti-union fliers were plastered all over the warehouse, while pro-union fliers were torn off the walls every day. Amazon held captive audience meetings in which workers were forced to meet with anti-union representatives who spewed anti-union lies to workers. Justine Medina, from JFK8 and the ALU, explained  union busters regularly disguised themselves as workers, complete with Amazon employee lanyards, and walked the floors telling workers to vote no.

In 2021, Amazon spent at least $4.3 million on anti-union consultants in  warehouses across the country, many of whom earn $3,200 every day — $400 an hour — for their work. Meanwhile, the average starting salary for the company’s warehouse workers is just $30,000.

The anti-union tactics employed by companies like Amazon mean that union votes are almost never fair.  Considering the amount of intimidation, misinformation, and straight up lies these workers were confronted with every day in the lead up to the election, it’s clear that today’s vote does not actually represent the real will of the majority of workers at LDJ5. And the fact that such union busting is allowed to happen in the first place is absolutely outrageous. Joe Biden had the gall to say “Amazon, here we come!” while at the same time standing at the head of a system that allows this kind of practice to continue. There should be no captive audience meetings, no retaliation, no threats against workers.

It’s just not true that the National Labor Relations Board (NLRB) is on the side of the workers. It’s not true that Biden’s NLRB is “worker friendly” — the agency is allowing this union busting to continue unabated. It has allowed corporations to get away with undemocratic union busting used to scare and manipulate workers into submission so that companies like Amazon can continue to exploit workers to make massive profits.

And the U.S. government has subsidized such exploitation. In the last twenty, years Amazon has received more the $4 billion in tax breaks and economic incentives from state and local governments led by Republicans and Democrats alike. In other words, the state is subsidizing Amazon while the company pays union busters $400 an hour to repress workers and stand in the way of workers’ basic right to unionize.

For all of their progressive rhetoric about unions, the Democratic Party — which currently occupies all elected branches of the federal government — is no friend to workers. Democrats make speeches about unions but then provide support to capitalist politicians who bankroll corporate repression of workers.

Workers should be allowed to unionize freely and we should not accept massive hurdles that stand in the way of that task. Every single anti-union law should be dropped and all of the union busting tactics used by Amazon and other massive corporations should be outlawed. This will require workers organizing actions and mass mobilizations all over the country. This includes the Amazon workers who want to unionize, the ALU, the Starbucks workers who have recently unionized or are seeking to unionize, as well as the entire labor movement.

The time to fight is now, and it is essential that the ALU takes the lead in organizing these actions in the streets.