‘The Bed Bugs Were the Last Straw for Us’: Starbucks Workers at the NYC Roastery Strike against Unsafe Work Conditions

Workers at the Starbucks Roastery Reserve in New York City have been striking against unsafe work conditions, including a bed bug infestation in their break rooms and mold in their ice machines. 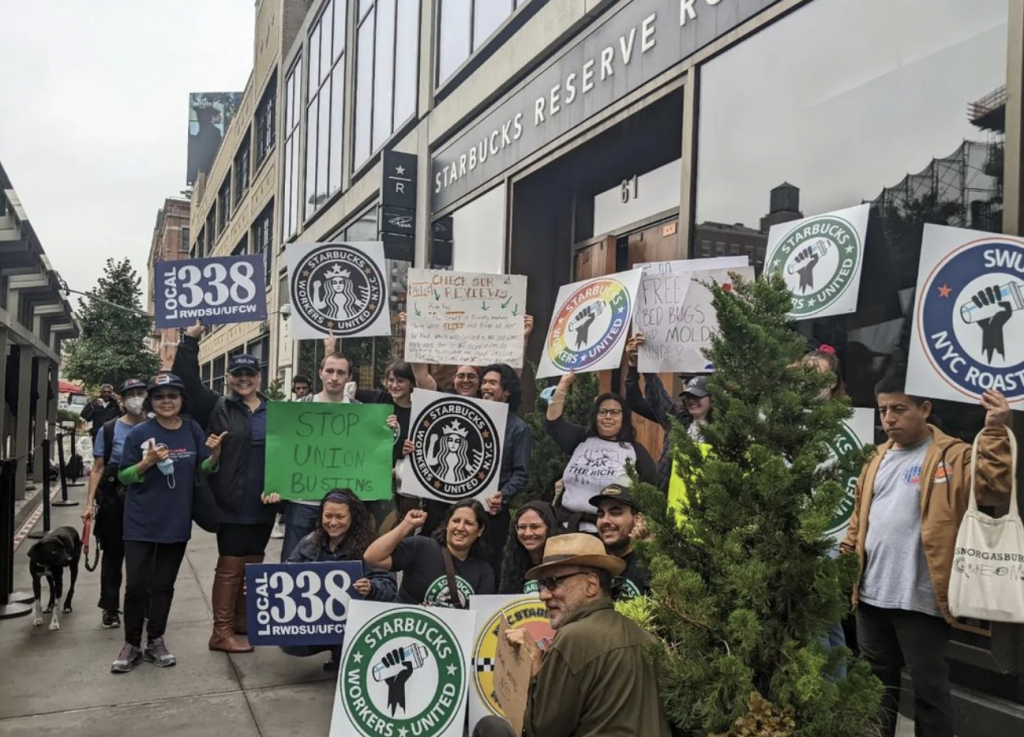 Workers at the New York City Starbucks Reserve Roastery in the Meatpacking District have been on strike since the beginning of last week against unsafe work conditions and the multi-billion dollar corporation’s refusal to bargain in good faith with the union for a first contract. The striking workers note how managers at one of Starbucks’s flagship stores refuse to address work conditions that are proving to be health hazards: the store had a recent outbreak of bedbugs in the break room and there has been black mold in the ice machines for months.

Two workers who spoke with Left Voice under conditions of anonymity described how management instructed them to discard any ice with mold in it and carry on, without addressing the root of the problem. When the bedbug infestation happened, workers were asked to remove their belongings from the break room, but were not told why. It was only days later that they learnt of the bed bug infestation; the fumigation and cleaning for which, workers believe, were substandard.

One worker, Laura Garza, says, “I myself have gotten sick from attempting to clean the mold from the ice machine without proper training, and the bed bugs were just the last straw for us. We cannot risk bringing that home.”

Workers United, the union representative of the workers, filed an OSHA complaint against the facility as well as a national Unfair Labor Practice charge with the National Labor Relations Board (NLRB) over the ”failure to bargain” and listed the Roastery and 151 other locations where Starbucks has refused to begin bargaining.

Workers at this Starbucks Reserve Roastery — many of who are young, queer, women — were the first Starbucks shop in NYC to unionize, winning their union election on April 1 of this year. They are one of twelve Starbucks locations to have unionized in downstate New York, and one of seven in the city. Nationally, over 250 Starbucks stores have elected to unionize. With over a 100 workers at this location, this is one of the bigger shops to have unionized nationally.

Although it has been months since they won their elections, workers at the Roastery, like other unionized stores across the country, still don’t have a first contract as Starbucks refuses to bargain in good faith with workers while continuing their union-busting practices. The company is facing over 300 unfair labor practice charges, and NLRB offices around the country have issued Starbucks over 35 official complaints, citing it for coercing, threatening, and firing employees over union activities and withholding wage increases and benefits from unionizing stores. Since the wave of unionization at the coffee giant began, Starbucks has fired over 100 workers who were organizing for a union.

Although the store has over 100 workers, not everyone is out on the picket lines, with many fearing retaliation from management. At the Roastery and every other store that has unionized or is seeking a path towards unionization, management has worked overtime to maintain an air of fear, often even depriving workers of knowledge of their rights and that they have a union. But, since the strike began at Roastery, workers have been picketing outside the facility every day, forcing it to close early the last few evenings. Workers at the picket also spoke about how management was bringing in scabs from the yet-to-open Empire State Building location to work at the store.

Workers at Starbucks make hundreds of dollars worth of beverages every hour, creating value far beyond what they are compensated for. The company’s massive profits are a direct product of workers’ labor. For striking workers, it is essential to expand, mobilize, and use this power of the shop floor to fight not just for safe conditions, but against every injustice suffered under Starbucks’s management and beyond.