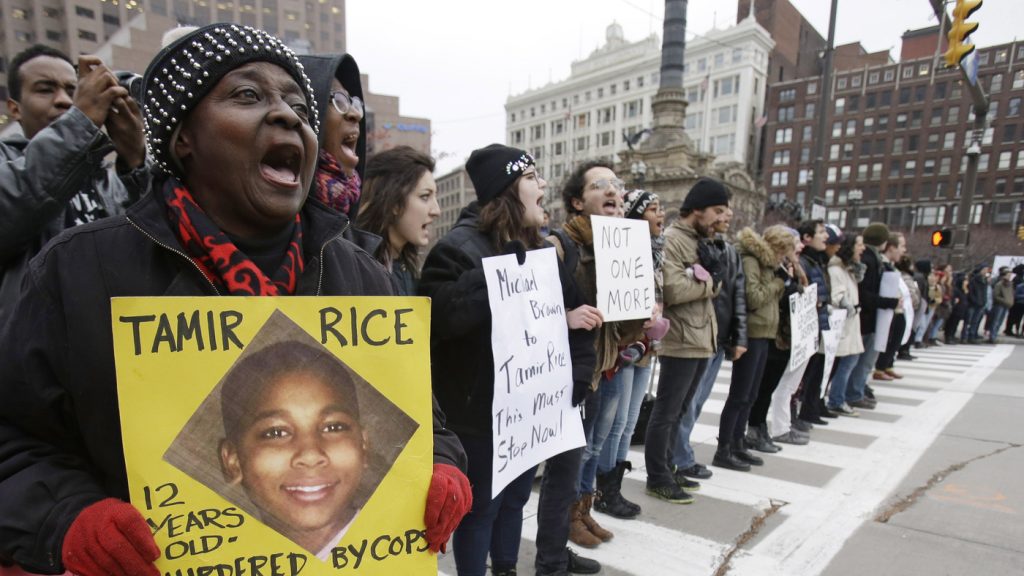 The Democratic Party asserts that it is the natural leader to reform racist police brutality. This creates tension because many people know that the Democrats promise loudly to be progressive when campaigning but act very differently when they win office. Joe Biden has followed that pattern and has openly betrayed several well-known police murder victims.

Officer Derek Chauvin, who killed George Floyd, was convicted of second-degree murder in a 2021 state trial. The chief of the Minneapolis Police Department (MPD) effectively denounced Chauvin’s actions as murder while maintaining that pushing a handcuffed man onto his stomach on the pavement was “initial[ly] reasonable … to get him under control” and insisting that the MPD as a whole opposed brutality.

Biden’s Department of Justice (DOJ) under Attorney General Merrick Garland then prosecuted Chauvin for civil rights violations against Floyd and a 14-year-old child he beat up in 2017. Chauvin accepted a plea deal with the DOJ for a federal prison sentence roughly equivalent to his state sentence, with the federal sentence to be served concurrently, not in addition. Garland declared, “The Justice Department is committed to … safeguarding the civil rights of all Americans.” Chauvin was treated differently from the vast majority of killer cops after protests by a tenth of the U.S. adult population. But what about other cops revealed to have committed racist murders?

The Case of Eric Garner

Eric Garner was accused of selling untaxed individual cigarettes and tackled by five police on a New York City sidewalk in 2014. Officer Daniel Pantaleo used a chokehold, then pushed Garner’s head against the pavement while a sergeant watched. After Garner shouted many times, “I can’t breathe,” he lost consciousness and died. When asked about Garner during a 2019 primary debate, Biden refused to speak about his murder. Instead, Biden asserted that Barack Obama’s confidence in him proved he had a good record on civil rights. Kristen Clarke, whom Biden appointed head of the DOJ’s Civil Rights Division (CRD), in 2019 called for Pantaleo to be fired from the NYPD and called it “a small measure of justice” when he was. Pantaleo was never indicted in New York for murder or even assault. In 2019, Donald Trump’s attorney general, William Barr, explicitly refused to make a civil rights charge against him. Since taking office, the Biden DOJ has not made any move to indict him on a civil rights charge.

The Case of Tamir Rice

In January, Clarke refused to press civil rights charges against Officer Timothy Loehmann, who fatally shot 12-year-old Tamir Rice from close range about one second after getting out of his squad car in a park in Cleveland in 2014. Someone had called 911 when they saw Rice playing with a toy pellet gun. The 911 dispatcher asked the caller three times whether the person they were reporting was Black or white but failed to tell the police that the caller said that the gun was probably fake and that the person was probably a minor. The police immediately drove up very close to Rice and shot him, even though when they arrived he was sitting down at a picnic table with no one nearby. Clarke informed Rice’s mother that the Biden DOJ refused to indict Loehmann with a letter in which she explicitly supports the same decision by the Trump DOJ in 2020 and holds, based on Supreme Court opinion, that the federal government can only obtain a civil rights crime conviction of a police officer who has killed a person without justification if it can prove that the cop killed them with deliberate bad will in his mind and self-consciously felt he was violating the law. Clarke underlined a sentence, apparently meant to be consoling, telling Ms. Rice, “By no means should you view the Department’s 2020 decision as an exoneration of Timothy Loehmann’s actions.”

This March, Breonna Taylor’s mother met with Clarke and asked the DOJ to prosecute the cops who killed her daughter in 2020 when they raided her home after midnight with a no-knock warrant. A judge called the 26-year-old emergency room technician a “drug trafficker” because a cop said he watched her ex-boyfriend carry a closed postal delivery package from her home to a drug house. Cops in plainclothes came to Taylor’s apartment while she and her boyfriend were in bed. According to a dozen neighbors, they did not audibly announce their identity. When they smashed in the door, her boyfriend grabbed a gun he owned and fired one shot in self-defense. Three cops then fired 32 bullets into Taylor’s apartment, hitting her six times. Kentucky attorney general David Cameron insisted that firing into Taylor’s apartment was justified self-defense and that “the grand jury [which he convened] agreed.” Then three grand jurors accused him of preventing them from considering homicide charges. So far, the DOJ Civil Rights Division has taken no public action to charge these cops.

This April, U.S. Attorney John Lausch, the DOJ’s prosecutor for northern Illinois, announced he would not charge Officer Jason Van Dyke with a civil rights crime. This is the cop who in 2014 shot 17-year-old Laquan McDonald 16 times in Chicago on video as McDonald walked away from him and after he fell. Four years later a jury convicted Van Dyke of second-degree murder and 16 counts of aggravated battery with a firearm. Yet the state released him after three years and three months in prison. Protesters in 2015 shouted, “Sixteen shots and a cover-up!” Lausch says now that proving a civil rights charge would be too difficult. The federal prosecutor said that if a cop intentionally commits murder but is experiencing “mistake, fear, negligence, or bad judgment” in his mind at the time, then that is not legally a civil rights crime.

On April 4, Grand Rapids, Michigan cop Christopher Schurr approached Patrick Lyoya, a 26-year-old Congolese refugee and factory worker, over driving with a license plate not registered to his car. The cop became violent after Lyoya began walking around the front of his car after implying that his passenger had his driver’s license. Lyoya resisted having his arms twisted back, ran away, pushed down the cop’s Taser when he attempted to shock him with it, and struggled to stand up from the muddy ground after Schurr tackled him. Lyoya’s friend got out of the car, filmed what the cop was doing, and shouted, “Let him go, brother! Can you talk to him like good, like … Stop grabbing him like that!” The cop shouted, “No!” and then drew his gun while he was on top of Lyoya with his entire body weight and shoving his face into the turf, and shot him in the back of his head.

Schurr’s body camera was turned off 42 seconds earlier, either intentionally or accidentally. The police chief and county prosecutor, who say an investigation is needed to determine whether Schurr did anything illegal, are building up a public argument that Lyoya took the cop’s Taser, and therefore shooting him was justifiable. It is somewhat difficult to see the Taser in the recordings without body camera footage. But even if Lyoya did have hold of it while pinned to the ground, that is irrelevant. The cop started the struggle by grabbing Lyoya. Then he tried to shock him. Police say Tasers are “nonlethal” weapons. During the entire so-called struggle, Schurr struck Lyoya many times, but Lyoya never struck Schurr. Schurr had the upper hand throughout, including at the moment he executed Lyoya.

We have a situation in which an armed person killed an unarmed person. One person sustained no injuries at all, while the other person is dead. The killer repeatedly struck the deceased while standing over him lying on the ground. The killer shot the deceased from behind at point blank range. The killer claims he acted in self defense and is being supported by authorities.

It is a standout feature of anti-Black racism in America that, if the victim is Black, some people will selectively forget that certain actions, such as hitting someone on the ground, who doesn’t hit back, using a gun in an alleged fist fight, and shooting a person in the back, are normally considered inherently immoral and indecent.

A backup cop handcuffed Lyoya’s friend at gunpoint and locked him in a squad car with no possible justification while Schurr, who knew the man had done nothing but stand still and beg for his friend’s life, kept silent about this fact. The Grand Rapids Police Department has refused to release the report Schurr wrote after killing Lyoya. In one month, Biden has made no public statements about this killing. Neither has his Department of Justice.

The minimum demand of the Black Lives Matter movement is that authorities stop covering up and approving violent crimes by police against people of color. The most basic part of that is to convict and imprison cops who are publicly exposed to have committed murder. Biden campaigned against Trump’s racism. At one point, he infamously ordered Black radio listeners to vote for him.

Biden’s near-total prevention of federal criminal charges against guilty cops — while increasing police funding — directly opposes Black Lives Matter. Tying the anti-racist mass movement from above to Democratic officials is a disaster. BLM has to link with other struggles against oppression and the working class beginning to radicalize at Amazon, Starbucks, and other locations in U.S. society. Locking BLM to the Democratic Party removed 99 percent of the 2020 protesters from public activity. We need political independence to combat all ruling-class representatives who do what Biden’s DOJ is doing.