The Brexit Deal: A Marxist Analysis

As the United Kingdom leaves the European Union, British capitalism will suffer. But as Marxist economist Michael Roberts argues, the bigger problem is the COVID slump and the underlying weakness of British capital. 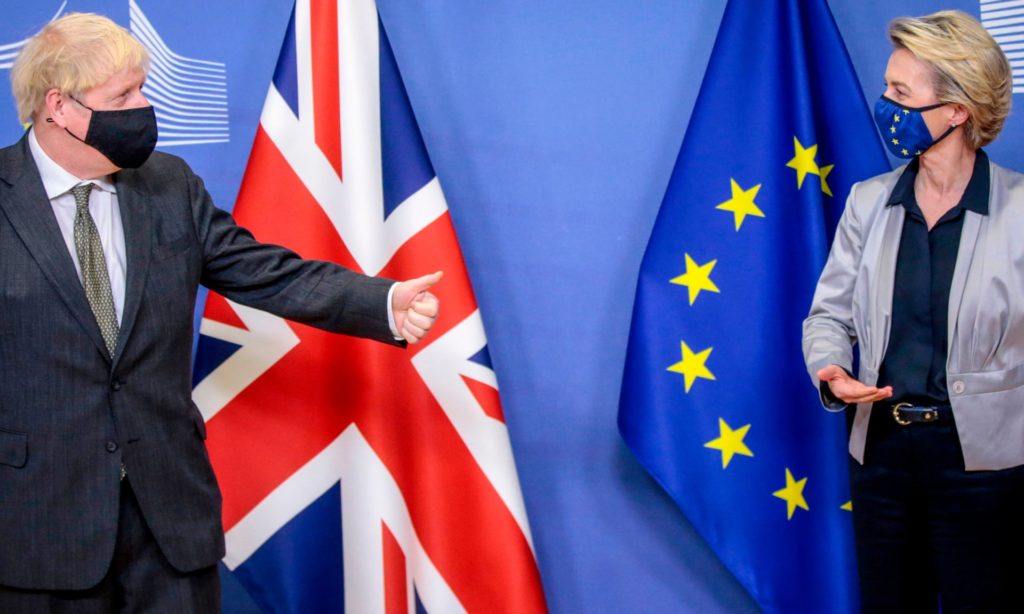 Originally published on The Next Recession.

The UK finally leaves the European Union on 31 December, after 48 years of membership. The initial decision to leave, made in the special referendum back in June 2016, has taken over four tortuous years to implement. So what does the deal mean for British capital and labour?

For British manufacturers, the tariff-free regime of the EU’s internal market has been maintained. But the British government will have to renegotiate new bilateral treaties with governments across the world, whereas previously they were included within EU deals. People will no longer be able to work freely in both economies by right, all goods will require significant additional paperwork to cross borders and some will be checked extensively to verify they comply with local regulatory standards. Frictionless trade is over; indeed, that’s even between Northern Ireland and mainland Britain with a new customs border across the Irish Sea.

And that’s just goods trade, where the EU is the destination of 57% of British industrial goods. The British government fought tooth and nail to protect the fishing industry (and failed), but it contributes only 0.04% of UK GDP, while the services sector contributes over 70%. Of course, most of this is not exported, but still services exports contribute 30% to UK GDP.  And 40% of that services trade is with the EU directly.

Indeed, while the UK runs a huge goods trade deficit with the EU, that is in part compensated by running a surplus in services trade with the EU. This surplus is in mainly financial and professional services where the City of London leads. Exports of UK financial services are worth £60 billion annually compared to imports of £15 billion. And 43% of financial services exports go to the EU.

The Brexit deal with the EU has done nothing for this sector. Professional services providers will lose their ability automatically to work in the EU after the Brexit deal failed to obtain pan-EU mutual recognition of professional qualifications. This means that professions from doctors and vets to engineers and architects must have their qualifications recognised in each EU member state where they want to work.

And the deal does not cover financial services access to EU markets, which is still to be determined by a separate process under which the EU will either unilaterally grant “equivalence” to the UK and its regulated companies or leave firms to seek permissions from individual member states. Over the next year, there may well be bit by bit agreements on trade in these areas. But the UK service sector is bound to end up worse off for its exports than was the case within the EU.

And that’s serious because the UK is a ‘rentier’ economy that depends heavily on its financial and business services sector. Financial services contribute 7% of UK GDP, some 40% higher a contribution than in Germany, France or Japan.

The UK is a country of bankers, lawyers, accountants and media people, rather than engineers, builders and manufacturers. The UK has a huge top-heavy banking sector, but a small manufacturing sector compared to other G7 economies.

What about the impact on working people? On leaving the EU, what little British labour has gained from EU regulations will be in jeopardy within a country which is already the most deregulated in the OECD.  The EU rules included a 48-hour week maximum (riddled with exemptions); health and safety regulations; regional and social subsidies; science funding; environmental checks; and of course, above all, free movement of labour. All that is going or being minimised.

Around 3.7% of the total EU workforce – 3 million people – now work in a member state other than their own. Since 1987, over 3.3 million students and 470,000 teaching staﬀ have taken part in the EU’s Erasmus programme. That programme will exclude Britons from now on.  Immigration into the UK from EU countries has been significant; but it also works the other way; with many Brits working and living in continental Europe. With the UK out of the EU, Britons will be subject to work visas and other costs that will be greater than the total money per person saved from contributions to the EU.

On balance, EU immigrants (indeed all immigrants) have contributed more to the UK economy in taxes (income and VAT), in filling low-paid jobs (hospitals, hotels, restaurants, farming, transport) than they have taken up (in extra cost of schools, public services etc). That’s because most are young (often single) and help pay pension contributions for those Brits who are retired.  The Brexit referendum has already brought about a sharp drop in net immigration into the UK from the EU, down 50-100,000 and still falling. That can only add to the loss of national income and tax revenues down the road.

Most sober estimates of the impact of leaving the EU suggest that the UK economy will grow more slowly in real terms than it would have done if it had remained a member. Mainstream economic institutes, including the Bank of England, reckon that there would be a cumulative loss in real GDP for the UK over the next ten to 15 years of between 4-10% of GDP from leaving the EU; or about 0.4% points off annual GDP growth. That’s a cumulative 3% of GDP loss per person, equivalent to about £1000 per person per year.

The UK’s Office for Budget Responsibility reckons that one third of this relative loss has already taken place because of the reduction in the pace of business investment since the referendum as domestic businesses stopped investing much, due to uncertainty about the Brexit deal along with a sharp drop in foreign inward investment.

And then of course, the COVID pandemic has decimated business activity. In 2020., the UK will suffer the largest fall in GDP among major economies apart from Spain and recover more slowly than others in 2021.

British capitalism was already slipping badly before the pandemic hit. Its trade deficit with the rest of the world had widened to around 6% of GDP; and real GDP growth had slid back from over 2% a year to below 1.5%, with industrial production crawling along at 1%. The UK economy already had weak investment and productivity growth compared with the 1990s and with other OECD countries.

Investment in technology and R&D has been poor, more than one-third less than the OECD average.

And the reason for this is clear. The average profitability of British capital has been falling. Even before the pandemic hit in 2020, average profitability (according to official statistics) was 30% below the level of the late 1990s and, excluding the Great Recession, was at an all-time low.

As a result, investment by British capital is set to plunge and is forecast to be down a staggering 60% by 2022 compared to the referendum year of 2016.

But maybe the UK can confound these dismal forecasts, as the government claims, because UK industry and the City of London can now expand across the world ‘free from the shackles’ of EU regulation. And it is increasingly clear how it thinks it can do this – by turning Britain into a tax and regulation-free base for foreign multinationals.  The government is planning ‘free ports’ or zones; areas with little to no tax in order to encourage economic activity. While located geographically within a country, they essentially exist outside its borders for tax purposes. Companies operating within free ports can benefit from deferring the payment of taxes until their products are moved elsewhere or can avoid them altogether if they bring in goods to store or manufacture on site before exporting them again.

Unfortunately, for the government, studies show that free ports might simply defer the point when taxes are paid, as imports would still need to reach final customers across the country. And the incentives may also promote the relocation of activity that would have taken place anyway, from one part of the UK to another. Moreover, tax breaks could mean a loss of revenue for the Treasury. And free ports risk facilitating money laundering and tax evasion, as goods are usually not subject to checks that are standard elsewhere. A deregulated Britain will not restore economic growth, let alone good, well-paid jobs for an educated and skilled workforce. It will only boost the profits of multi-nationals, using cheap, unskilled labour.

In sum, the Brexit deal is another obstacle to sustained economic growth for Britain. But the COVID pandemic slump and the underlying weakness of British capital are much more damaging to the UK’s economic future than Brexit. Brexit is just an extra burden for British capital to face; as it also will be for British households.