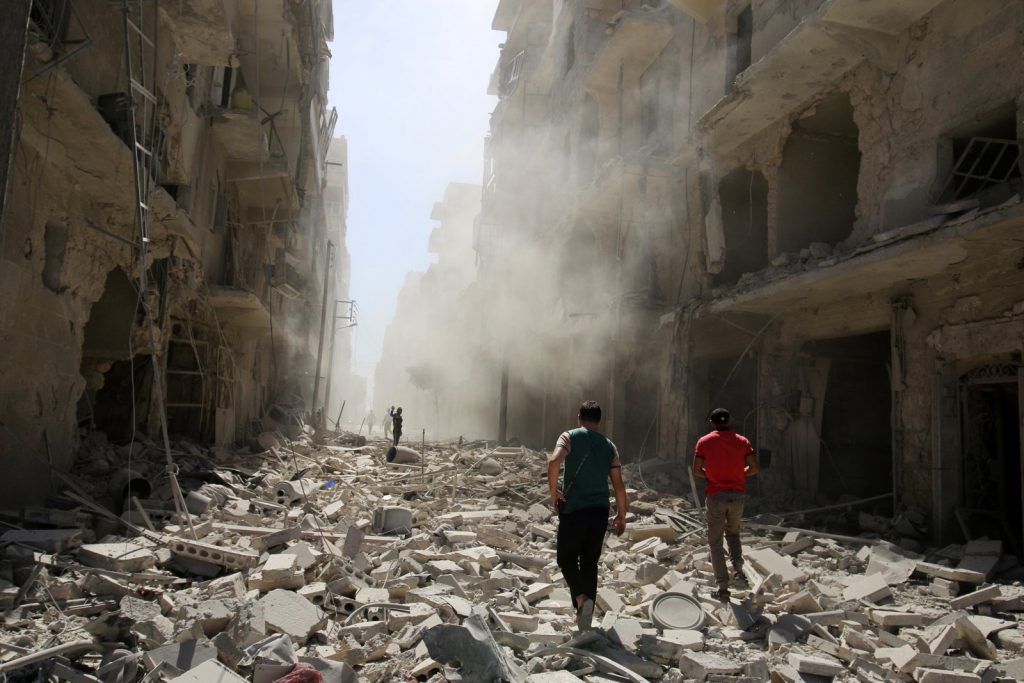 The government of Bashar Al-Assad has long been waging a criminal war against the Syrian opposition. After the revolutionary uprising in 2011, he has cracked down on all dissent with an iron fist and thereby pushed the political opposition to engage in armed warfare. The support for the government is narrow and the resistance of the rebels enduring. The civil war has bled the Syrian people for six years now.

However, this is by no means a war between only two parties. From the beginning, foreign governments intervened in the civil war in Syria. Most notably, Russia, Iran, and Lebanon’s Hezbollah have lent financial and military support to Assad’s forces, whereas the US, Turkey, and Saudi Arabia have taken the side of the opposition by supplying, funding, and training the militias.

Towards the end of 2015, it seemed that the regime was unable to successfully wage war against the opposition. But then Russia began to intervene more prominently in the war, and the situation changed dramatically; the Syrian regime was able to recover and take the offensive, winning back large swaths of territory.

The besieged city of Aleppo has become the epitome of the Syrians’ plight. By the time Turkey struck an armistice with Russia (involving the Syrian regime and the rebels in Aleppo), all hospitals in the city had been deliberately destroyed. Similarly, schools had been targeted by the government’s aerial attacks. The deadliest of them, on October 26, left 35 people dead, 22 children among them.

Summary executions and disappearances were reported during the takeover of Aleppo, and the ceasefire was violated only a few hours after being implemented, when pro-regime fighters attacked a convoy of wounded opposition members and their families, who were to be evacuated.

It is hard to overstate the scale of the humanitarian crisis in Syria since the civil war started. The number of Syrian refugees who have fled the country, now an estimated 5 million , gives us a sense of the people’s suffering and despair.

The continuous, systematic attack on civilian targets by the Syrian regime forces is enough cause for outrage. The fact that the Stalinist left—along with Chavismo and other smaller groups–continues to support the Syrian regime only underscores their longstanding political bankruptcy. Their positioning responds to a simplistic “camp” analysis, in which any opposition to the US is progressive.

In the US, the UNAC expresses this position. The organization recently organized a tour across the country featuring Canadian “independent” journalist Eva Bartlett, who blatantly denies Assad’s crimes and calls all Syrian rebels “terrorists.”

On the other hand, the US and other Western imperialist powers have also caused endless grief and destruction in Syria and all over the Middle East. So far, the so-called “War on Terror” has left 1.3 million people dead. .

This is why the calls for a UN intervention or a no flight zone—necessarily enforced by the US/NATO—represents no solution. The catastrophic outcome of the NATO-led intervention in Libya should serve as warning for those who champion such a course of action.

The opposition in the Syrian civil war has faced serious obstacles. Although a legitimate, largely spontaneous grassroots uprising took place in 2011, the character of the conflict quickly mutated to an armed struggle, and different factions took the helm of the opposition.

In their widely celebrated book, Burning Country, Leila Al-Shami and Robin Yassin-Kassab state, “In the months and years that followed [the 2011 uprising], everything the LCCs statement had feared came to pass. Militarisation – more specifically the scramble for weapons and funds – transformed the revolution from a leaderless movement into a cacophony of a thousand competing leaders, from horizontalism to a jostle of hierarchies.”

An attempt to unite forces to confront Assad gave birth to the Free Syrian Army (FSA), but the coalition was neither cohesive nor homogeneous. The FSA encompasses radically different groups, including parts of the secular opposition and salafist armed militias, which have little more in common than their opposition to Assad. What’s more important, the political goal of the leading organizations in the opposition is nowhere near a workers’ government or the end of capitalism in Syria.

Scattered but significant examples of the political programs that are hegemonic among the Syrian opposition are proof of this. The Freedom Charter is a liberal bourgeois program that fails even to denounce the harmful influence of the imperialist powers. The program advanced by the National Coalition is seemingly confined to the removal of Assad. Although these expressions were among the most prominent internationally, it needs to be said that their legitimacy is deeply questioned among the militant groups on the ground.

The Kurdish PKK, the most progressive force in the region, has remained a separate organization, fighting ISIS and the Turkish government at the same time.

The opposition’s heavy dependence on foreign funding, training, and weapons supply, predominantly coming from Turkey, Saudi Arabia, the US, and Qatar, is by now indisputable. Al-Shami and Yassim also confirm this in their book. In fact, part of the reason for the weakening of the defense of Aleppo was Turkey’s deliberate decision to pull troops out of Aleppo in order to deploy them in Jarablus for a ground operation aimed chiefly at the Kurds .

All these developments have made it effectively impossible for any revolutionary force to take the helm of the opposition in Syria.

Of course, the fact that no socialist organization is at the head of any of the factions leading the opposition is also indicative of the overall reactionary character of the conflict. It is our task to acknowledge both the lack of a revolutionary socialist perspective in the opposition as well as the regime’s brutal suppression of the Syrian people’s civil rights. Assad’s and Russia’s conquest of Aleppo has been one of the bloodiest episodes since the turn of the century.