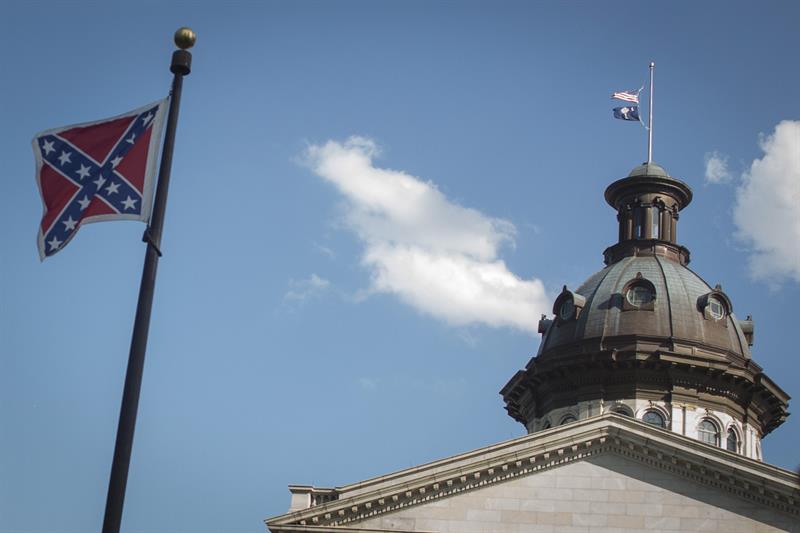 Together with the recent killings of Freddie Gray, Michael Brown, Eric Garner, Akai Gurley, Walter Scott, Rekia Boyd and many more at the hands of the police, it is clear that the threat of racist violence, whether by the police or white supremacists remains a daily fact in the lives of black people across the U.S. According to the Guardian, police killings of black men and women are on pace to surpass 300 for the year.

Although the horrific attack on the historic Emanuel African Methodist Episcopal (AME) Church was officially condemned in the strongest terms by Republicans and Democrats, it is the policies and actions of both parties that tacitly sanction white supremacy and racist attacks against black people. Each time a black man or woman is killed by the police with impunity, each time a racist vigilante like George Zimmerman walks free, society is given the message that black lives do not matter. Indeed, Dylann Roof stated in his hateful manifesto that he was “awakened” after George Zimmerman murdered 17-year old Trayvon Martin, whose only crime was walking alone while black.

The selection of this particular church for the brutal killings has a particularly tragic historical significance. Emanuel AME was founded by freed slave Denmark Vesey in 1822 and Vesey used the original building to mobilize black people and stage a slave uprising. But the plan was discovered by slaveholders before it could be carried out and they arrested Vesey and 10 fellow slaves on June 18th—193 years and a day before the June 17, 2015 massacre. Vesey was hung with five of his comrades and his church was destroyed.

The latest massacre comes less than three months after white cop Michaels Slager was filmed shooting and killing Walter Scott, a black man who was stopped for a broken taillight in Charleston. Slager was indicted for the killing, but his chances of being convicted are unlikely. In the past 20 years, less than two dozen police officers were charged with murder for killing citizens. None was convicted of murder and most were not convicted of any crime. According to even the FBI’s own statistics, several thousand police killings took place over that period, killings which were later ruled “justifiable”.

The Charleston murders draw new attention the omnipresent symbols of slavery and white supremacist ideology which exists throughout South Carolina and the south, most notably the Confederate flag flying high on the grounds of the State Capitol building. The Confederate flag is the flag of death and terror. Its only “tradition” is that of the enslavement and lynchings of black people and the burnings and bombings of black churches and schools. It is the flag of the Klan. It represents the murder of Black and white and Jewish people who dared to organize together. But it is not just these symbols that serve as a reminder of racism in the U.S. The ongoing police killings across the country act as legal lynchings, the vast majority of which will go unpunished. The mass incarceration of black and Latino people have created an enormous prison labor force—a literal form of slavery never abolished under the 13th Amendment. The legacy of Jim Crow continues to exist through unemployment and racism in the workplace, and the substandard housing, healthcare, and education affecting the black community, not just in the south, but throughout the U.S. One study showed that in the decade proceeding 2013, 65,000 children in Baltimore showed dangerously high blood-lead levels, most of whom were in poor neighborhoods like Sandtown-Winchester, where Freddie Gray was killed.

The destruction of all symbols of the racist Confederacy, including the Confederate flag in South Carolina and throughout the country should be supported. But racism against blacks, Latinos, and other oppressed minorities will not be ended with the removal of those symbols. Racism is a foundation of American capitalism. It is interwoven by the bloodied hands of slave labor. Although the Civil War abolished chattel slavery, racism continues to function for the capitalist class and their reactionary defenders. Racism prevents the working class from unifying and justifies the ongoing hyper exploitation of blacks, Latinos and other oppressed groups. As Lee Sustar points out in the Socialist Worker , multinational corporations have flocked to South Carolina over the past two decades, lured by low wages and the promise of open shops. Pervasive racism has been a major barrier to unionization and the mobilization of workers throughout the south.

It is not a coincidence that Roof chose this moment to carry out the brutal murders targeting Black people. Over the past year, Black people—youth and women in particular—have mobilized against police terror and racism as part of the Black Lives Matter movement. White supremacists like Roof aim to terrorize black people and other minorities at the moment when they begin to demand their rights. The attack was tragically reminiscent of events like the 1963 Birmingham bombing of a black church which killed 4 black girls and the lynchings targeting black people that took place in the early and mid-twentieth century. Like those acts of terror, the murders in Charleston took place in an era of massive mobilizations for racial equality.

President Obama made news this week by stating plainly that racism continues to be a problem to be dealt with in the U.S. This is a clear rhetorical shift from the ludicrous declaration of a “post-racial society” associated with his administration. But Obama has failed to take any decisive action against the rampant structural racism. He has not, in any significant way, reversed racist drug policies which have targeted, above all, black and Latino communities and helped put blacks in jail at a rate six times higher than that of whites. And while Obama and the Democratic party have used the opportunity to focus on the need for gun control, neither have challenged ever-expanding budgets for local police forces for new military-style weapons, armored cars and tanks, and other instruments used to terrorize black people and other minorities. In the days after Freddie Gray’s murder in Baltimore, Obama did not hesitate to refer to the black youth who rebelled as “thugs” a word he undoubtedly knew to have racist implications. Time and again, Obama has proven he won’t challenge racism or white supremacists.

It is likely that the Confederate flag will come down from the State Capitol in Charleston and retailers like Walmart and Amazon have announced they will begin removing items emblazoned with the Confederate Flag. This is reflective of the powerful struggles of black people over the past year. However, ending the historical racism will take the continuous organizing and bravery shown by working people and youth in the streets against anti-black racism.

All 50 US states fail to meet global police use of force standards, report finds

South Carolina Officer Is Charged With Murder of Walter Scott

The Counted: number of people killed by police this year reaches 500

For Charleston’s Emanuel AME Church, shooting is another painful chapter in rich history