The CHAZ Experiment: What Went Wrong and What Lies Ahead

Seattle mayor Jenny Durkan is sweeping up the “Summer of Love” — police have retaken the East Precinct and socialist City Council member Kshama Sawant has been threatened with investigation and expulsion from City Council. A participant weighs in on what happened to CHOP and how can we use these lessons to better prepare new radical projects and organizations. 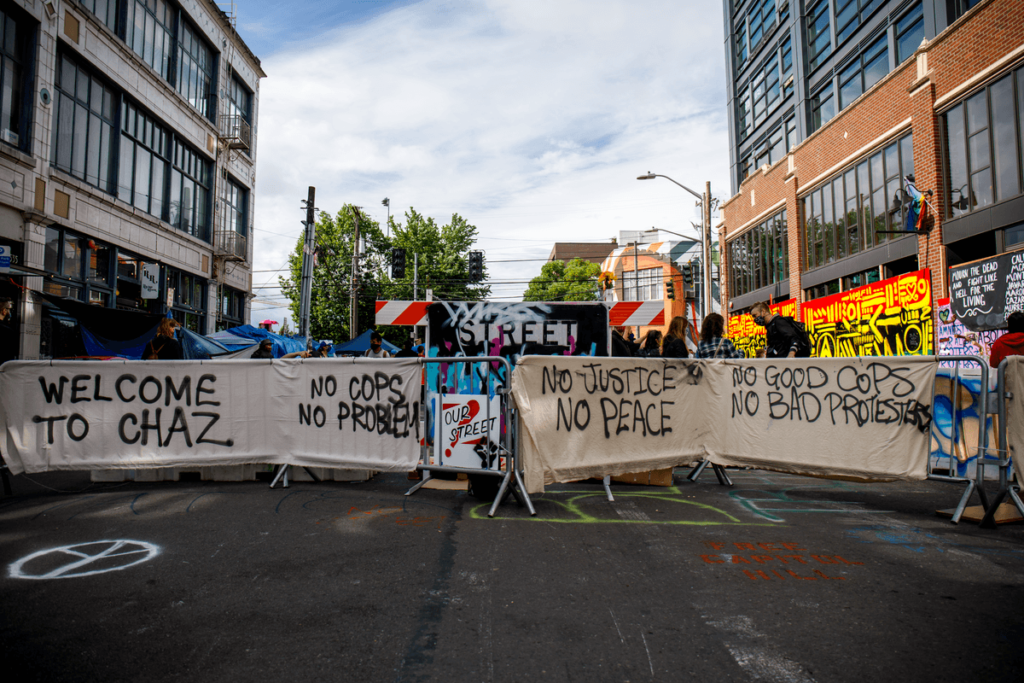 It is safe to say that CHOP, formerly known as CHAZ, is on its last legs. While stragglers and small groups of protesters defy the police’s attempt to flush them out, most have left and given up on the occupation. Even though the Seattle Police Department is arresting residents and setting up checkpoints (which ironically were the very same accusations made of the zone’s occupiers), many believe that the return of the police is a necessary evil. Many shootings, assaults, and most recently the death of a protester on I-5, have been blamed on the demonstrators and occupiers for their lack of respect for “law and order.”

How cruel and careless must one be to blindly parrot such dangerous far-right propaganda, as Democrats and Republicans alike are now doing? The police perpetrate all sorts of injustices, and not only are they exempt from the consequences of their actions, but they are absolved of responsibility or blame when the violence and crimes they refuse to stop carry on.

There exists a direct correlation between the defanging of CHOP’s radical experiment, which guaranteed safety without cops, and the rise in violence against locals and protesters alike, violence that has been abetted by both police inaction to prevent those who wish to assault and murder, and police action to harass and intimidate demonstrators. This correlation, however, is an uncomfortable or inadmissible truth to some who would prefer “talking it out” with violent Proud Boys and cops. It is imperative that we dispel the lies and make the truth available so that future radicals can avoid the same pitfalls.

Accusations that CHOP was ruled by warlords and that armed protesters were extorting businesses and checking for IDs, for example, shaped how many people thought of the experiment. This was the case even after the Seattle Police Department (SPD) walked back on these unfounded claims. Even though the damage was done and disinformation seeped into mainstream media unchallenged, many in the zone naively opted to portray the project as similar to the yearly Bloc Party and Pride march, which take place in the neighborhood — no more than a rambunctious celebration or festival. Mayor Durkan herself dubbed it “the Summer of Love” while it was still politically convenient to do so, and many decided to “officially” rename the zone to CHOP, or Capitol Hill Occupied Protest, which was seen as less inflammatory or “misleading,” and helped distance protesters from “violent actors” whom they blamed for looting and escalating violence. The truth, however, lies elsewhere.

Seattle has had more than its fair share of problems with liberals who often capitulate to the interests of both the Democratic Party and the corporate class they represent. This quickly and drastically brought the project to its knees, owing very much to the ongoing deradicalization and demobilization of the movement. It is hard to blame people for playing into pacifist and non-confrontational narratives because of police brutality and its resulting confrontations (with the former being underreported by the media), but a certain quote by civil rights activist and socialist revolutionary Kwame Ture comes to mind: “[Dr. King’s] major assumption was that if you are nonviolent … your opponent will see your suffering and will be moved to change his heart. That’s very good. He only made one fallacious assumption: In order for nonviolence to work, your opponent must have a conscience.”

The movement went too far in the interests of pacifism and dropped its defenses against state actors, making itself wholly willing to cooperate and engage in “dialogue” with fascist gangs, police, and city officials. These are interested in either causing harm to ensure their power or pursuing only minor concessions and pretty words while still pushing for austerity cuts and business-as-usual politics with their cold and calculating brutality. This unwillingness to take even defensive positions was a grave mistake. The improvised assembly simply waiting at the doorstep of the East Precinct building, venturing out only to march and parade, failed to progress any further and coalesce into a genuinely independent body (as the proposed seizing and repurposing of the building into a community center could have enabled). This meant that later, more serious issues weren’t dealt with effectively.

The second-largest mistake was the infiltration and deorganization of the Zone. This too resulted from blind and gullible pacifism, but other factors contributed to it as well. Before, there had been many gatherings, speeches, and lively political debates in which participants communally discussed decisions and problems, and debated propositions. There was the beginning of various specific committees and organizations, even if rag-tag and largely informal, dedicated to procuring food, general supplies, tents, and bedding; maintaining barricade defense, security, and the night watch; providing medical care, transportation, education, basic assistance, and counseling; and carrying out garbage collection, reconnaissance, and intelligence.

This experiment shows that even in times of crisis and under suboptimal conditions (as with the Occupy Movement), communally-led societies are feasible. If a neighborhood can so easily and effectively spring to action and tackle immediate issues and prove its critics wrong — even amid tear gas and police beatings — why can’t our factories, workplaces, hospitals, courts, places of government, and schools also be operated in such an organic and truly democratic way?

These beginnings of direct community planning and democracy were hampered and nullified by outside actors who ostracized, excluded, and replaced the original group of leaders. They narrowed the demands, defanged and pacified the masses, silenced radical voices, and promoted the goal of collaboration and cooperation with the city government and police. This included, among other things, destroying the cashless No-Cop Co-Op, allowing for the city to shrink the Zone and relocate its barricades, and the demobilization of the night watch, which along with police misaction and obstruction of both care and justice has led to the death and critical injuring of numerous individuals.

Again, rather than point out how the police have not only again failed to protect the public or prevent harm (the very reason they give for their existence) but have also assaulted and terrorized both demonstrators and residents simply for standing up for Black lives, the media have placed the responsibility of these actions solely on CHOP. Many falsely claim that more officers and more funding will solve this problem, in effect legitimizing the system of police violence and devaluing the message of Black Lives Matter.

At the same time, some organizers were unable to capitalize on the momentum or to take on clear demands. City Council member Kshama Sawant of Socialist Alternative made a pledge to cut SPD funding by 50 percent — tenfold more than Durkan’s meager promises — but still proposed to leave the department intact with hundreds of millions of dollars to operate with. Sawant has held mixed positions on police unions and reform, and while recognizing that the fully abolishing the police cannot take place without a genuine socialist revolution, she does not prioritize either for the immediate future, seemingly believing that the current moment is not ripe for this. She instead focuses on the 50 percent cut, the firing of corrupt officers, and for a tax on Amazon.

And while Socialist Alternative has recently achieved wins with the City Council approving a big-business tax, it is not nearly as radical as the plan called for by Sawant and fellow city councilwoman Tammy Morales, nor could any tax be enough on its own to bring down the capitalist class. Additionally, while she has been momentarily spared both investigation and removal from City Council, the tide of reaction still eagerly waits for her arrest or worse.

Although Sawant’s campaign has failed to act on certain opportunities and popular sentiments, her leadership is undeniably a crucial part of the ongoing movement, and were she neutralized, this would spell even further disaster — not only for the protesters already demoralized and under attack, but also the working-class, which she has helped champion and protect in her time on the City Council.

Even though the protests against police brutality and similar demonstrations will certainly continue in Seattle and the pressure on the state is unlikely to decrease, the potential that CHOP held has largely come and gone and the SPD will, for the time being, resume their operations and agenda of tyranny out of the East Precinct. The Zone’s demands have been changed and ignored, the movement co-opted, commercialized, and dismantled, but the memory of what happened there is fresh, and its effects exist outside Seattle.

The contradictions between worker and capitalist, antiracist and bigot, protester and cop, exploited and exploiter, have already been set into motion, and a fire has been lit in the very soul of this country, a fire that cannot be so easily extinguished. The coalescence of organized labor with the demands of Black liberation and advancement is only beginning to grow, and many across the nation and the world have been inspired and seek to replicate the experiment in Capitol Hill, fine-tuning the variables and looking to improve its conditions, formulation, organization, and ambitions.

It is now up to the Left as well as the masses to remain militant and committed, and to not back down or be intimidated by the powers that be in asking for our full demands. It is only fair to the countless victims of police and capitalist violence that we make the world a better, fairer place. Capitol Hill provides the perfect lesson in achieving this once and for all.