The NYC City Hall Encampment is at a Crossroads

The City Hall encampment is a hub of political education for the Black Lives Matter movement. The City Council is poised to vote the budget and the space is under increased police pressure. Where is the movement going? 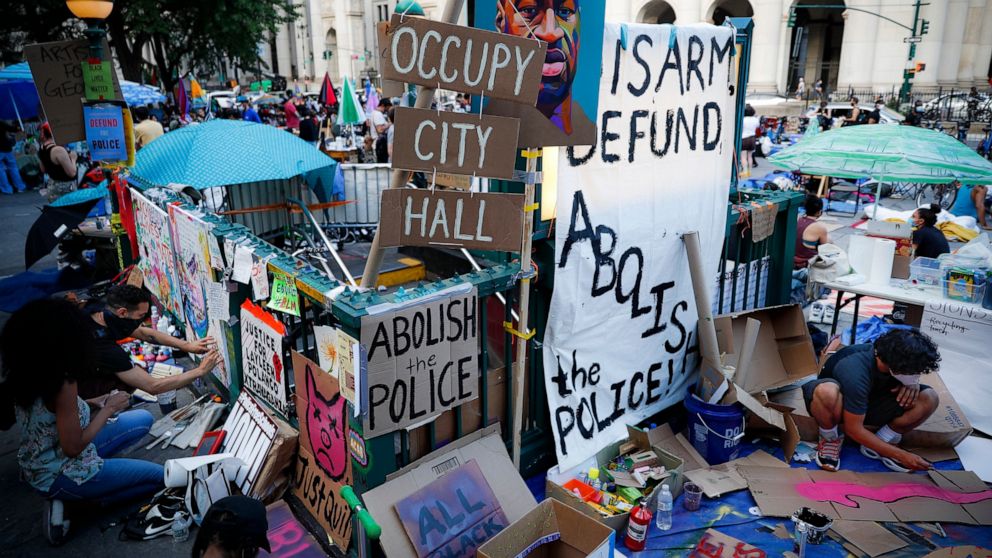 For 7 days, thousands of people have come through the City Hall Encampment, also known as Abolition Park. The encampment calling to defund the police and fighting for Black Lives has brought together thousands of people across the city. Throughout the day, teach-ins take place led by a variety of organizations and groups, including DSA Emerge, Abolition Plaza, VOCAL NYC, People’s Assembly, and more. These include topics ranging from why we should abolish the police, to de-arrest training, to information on abolition and gender-based violence. Throughout the day, there are political education reading groups, and the “People’s Library” is being widely utilized. 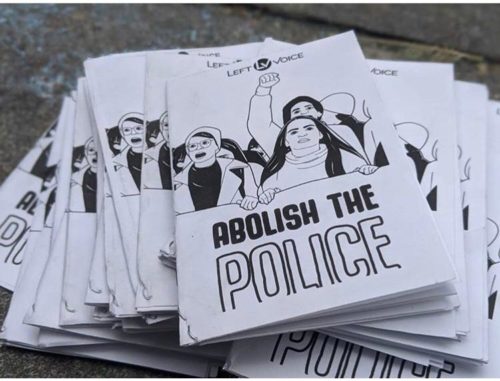 Walk around the camp and it’s not uncommon to see folks reading radical left literature. Yesterday, as I walked, I ran into a comrade reading State and Revolution by Lenin, which he assured me was a tough read, but he was getting through it. Left Voice put out a zine on police abolition, which passers-by can find in the People’s Library.

As you walk through the encampment, everyone is discussing politics. What would it look like to live in a world without police? How can we kick cops out of our unions and out of schools?

Comrades on Left Voice’s editorial board have been circulating a petition to free three Black Lives Matter protesters:  Urooj, Colin, and Sam, along with all other political prisoners.

It’s also an art space, with beautiful signs, slogans and art being made regularly. One night, an artist made a large painting of George Floyd and asked people in the encampment to add their hand prints. There have been vigils for Tamir Rice on his birthday, and another for Breonna Taylor. 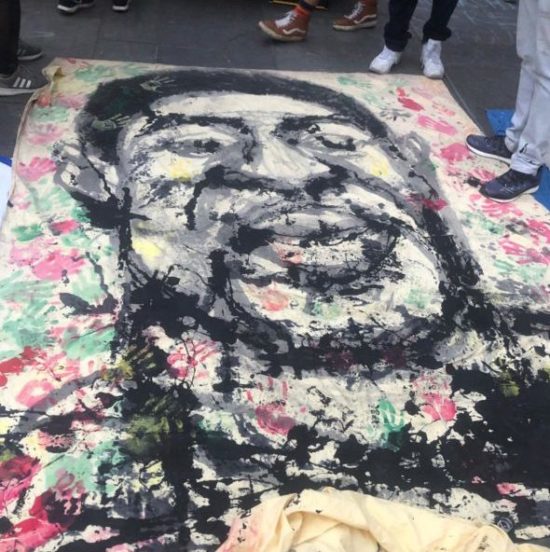 The encampment is fully stocked with snacks, which comrades come around to pass out on a regular basis. Meal donations ensure that no one goes hungry and that all protesters are nourished throughout the day — and in fact, we’ve been more than nourished. The food is often donated by restaurants or home made: vegan burritos, empanadas, Japanese curry, and of course, lots of pizza. As my friend said, “the working class and oppressed deserve the best.”

So far, we’ve stayed through not one, but two rainstorms, holding umbrellas and tarps over our heads while chanting Black Lives Matter!

The encampment started 7 days ago with only a handful of people organized by VOCAL taking over the grassy area in front of City Hall. By the next day, hundreds were there with the occupation turning into the hub that it has become.

This occupation is part of the month-long movement brought about by the murder of George Floyd. Under the banner “Black Lives Matter,” millions around the country have taken to the streets in near-daily protests. The protests have expanded their scope, highlighting Black women’s lives, including the murder of Breonna Taylor and the femicide of Toyin Salau. They have also highlighted Black trans lives during Pride Month, especially the murder of Tony McDade by the police. An estimated 15,000 people attended a “Black Trans Lives Matter” march in Brooklyn on June 14.

The encampment has become the hub of protests, with folks streaming in after the Queer Liberation March on Sunday, as well as countless other protests ending there and staying for food and political discussion. Last night, the March to Defund the NYPD and Abolish the Police ended there, with thousands of people streaming in and staying for both the open mic session and a teach-in that was held in the middle of the street.

Thousands of cyclists descend upon City Hall, where protesters continued with their encampment in spite of the rain and bad weather.#BlackLivesMatter #OccupyCityHall pic.twitter.com/YBlYM4GgZS

All around the country, protesters are questioning the institutions that hold up the United States. They are tearing down statues and questioning U.S. history. They are increasingly doubting the validity of the institution of the police. This is expressed in countless signs that demand the abolition of the police. But, the central rallying cry of the movement has become defunding the police — which have bloated budgets that are the result of both Democrats’ and Republicans’ tough on crime policies.

In NYC, the police budget is $6 billion — among the highest in the nation. The occupation, begun by VOCAL, a local non-profit, demands defunding the police by $1 billion. Yet, the New York Times ran an editorial by Mariame Kaba demanding to defund the police by half. That’s the demand also being put forward by the DSA.

If you walk around the encampment, however, many signs call for abolishing the police entirely. I have been at the camp every day for the past 5 days, and I don’t think I’ve ever met anyone who thinks the demand to defund by $1 billion is enough or that it should be the demand of the encampment. Rather people are split between demanding that the City Council defund the police by half as a step to full abolition, or straight up, defund to 0.

In fact, a few days ago at a speakout organized by the Radical People’s Assembly, participants had the chance to discuss demands. People spoke about defunding the police to 0, abolishing ICE, kicking cops out of our unions, standing in solidarity with Palestine, and funding public health and schools.  Folks spoke about how the Democrats and Republicans have been complicit in the oppression of Black and brown people and the hyper exploitation of the working class as a whole. When one person started talked about voting as a way of creating change, many people in the crowd yelled back “Democrats suck!”  Others spoke about the need to tie the fight to end the police to the fight to end capitalism, as the police exist to protect the capitalist system. The occupation has been a way for some comrades to think about and imagine a different future of collaboration and community support.

Although the people who are camping out have much more radical demands than VOCAL has proposed, there has not yet been a democratic space to vote for new demands based on the conversations that participants have been having. The encampment has not discussed and voted on the next steps to take. This is particularly important, as tonight the City Council will vote on a budget.

Based on this, the people participating in the encampment should decide what to do. Should the encampment maintain itself and fight for more? Over the last few nights, the police have come more heavily armed than before and have escalated tensions with the peaceful occupation. This morning, cops tried to rip down the #OccupyCityHall barricades. Eventually, the police retreated, and the crowd sang goodbye to them. But, it’s likely that the police will escalate attacks after the budget is voted.

Cops trying to rip down the #OccupyCityHall barricades. Protesters push (or rather, pull) back to protect their space. #WeKeepUsSafe #DefundNYPD #AbolishThePolice

Eventually, the police retreated, and the crowd sang goodbye to them. pic.twitter.com/MzCK1LHrm3

At this point, the primary defense of the occupation is numbers. In this sense, as many people as possible should come to the occupation tonight, to defend the space and help decide what next steps should be taken. We tenants rights groups who are fighting the wave of evictions that will be forthcoming to use the space as an organizing hub and unite our struggles. We should invite workers who will also suffer from austerity, who have show they are essential to our survival and to capitalist profits to play a role in the occupation. Together, we will need to fight  the austerity that will result from the economic crisis, as well as against the police, against evictions and for Black lives We want cops out of our schools, our subways, and our hospitals. We want quality healthcare, education and transportation.

There is a lot of tension at the encampment now. What will be voted? What will the cops do? What will we do? What is certain is that the space has played a central role in politicizing and radicalizing the folks who have been there day in and day out. We still have a lot of work to do, to bring down the racist police and the capitalist system it upholds. But what is certain is that we are increasingly clear, angry, and militant in our struggle for Black lives and against the institution of the police.

Would you like to contribute to Left Voice? Please send us your articles, photos, and videos. Also, if you are interested in translating from Spanish, Portuguese, French, German, Italian, or other languages, please get in touch. [email protected]oice.org