Hundreds of thousands of people took part in the Global Climate Strike, the biggest international climate action since the beginning of the Covid-19 pandemic. They are demanding sweeping action to combat climate change, going beyond the tepid reforms of “green capitalism” which place profits over people. 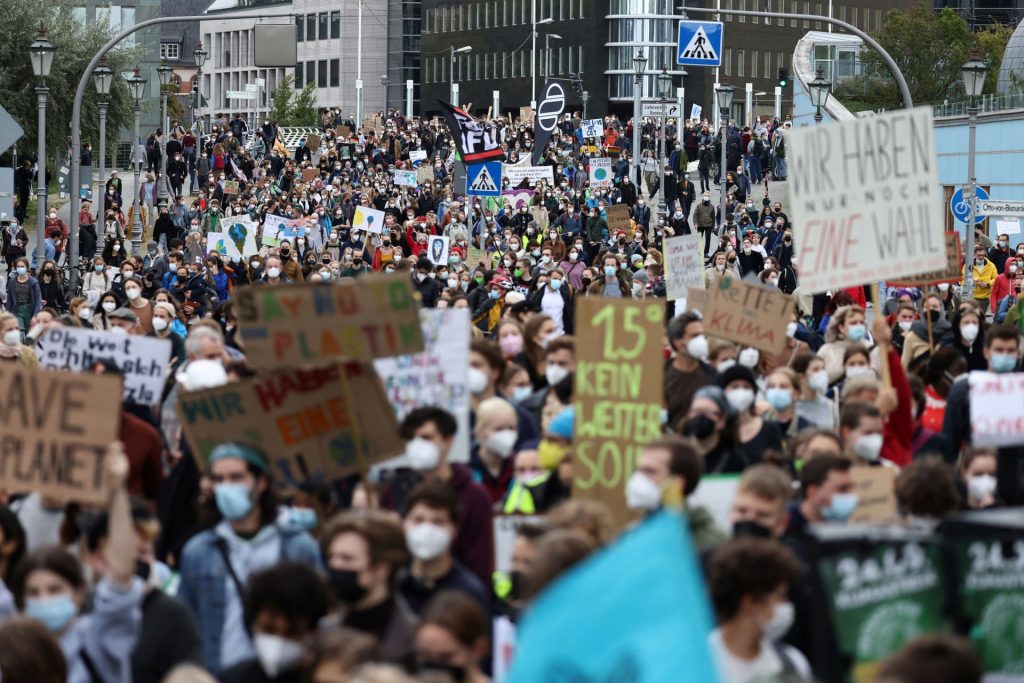 A year and a half after the Covid-19 pandemic, the Global Climate Strike brought hundreds of thousands of young people, students, and activists into the streets to demand sweeping action to combat climate change. The call was imbued with more urgency after the recent release of the IPCC report which paints a bleak picture of rising global surface temperatures and sea levels, and the likelihood of compound climate events; it also shows without a doubt that it is capitalist industry and its destructive practices that are driving the rapid rate of global warming.

Climate summits and climate pledges by world leaders promising a greener form of capitalism offer nothing to the millions of people across the world who are already feeling the effects of climate-change induced natural disasters such as wildfires and floods. Students and activists from across the world — from Argentina and Mexico to South Africa and New York — are demanding more. They took to the streets to denounce governments from all sides of the political spectrum who are putting their futures at risk to save capitalist profits.

Thousands of students and activists took part in actions across the country, demanding urgent action to stop the unbridled destruction of the environment by big business and their representatives in government. Though the protests were notably smaller than the Climate Strike of 2019, which brought hundreds of thousands of young people and activists into the streets against the blatant denialism of the Trump administration, the demonstrations show a continued commitment to confront climate change by young people and activists who recognize that they cannot put their futures in the hands of representatives of a system that upholds profit over the lives of billions of working and oppressed people across the globe.

Joe Biden promised to make environmentalism a central pillar of his presidency, but his policies since taking office have told a vastly different story. While Biden pays lip service to the urgency of combating climate change at global climate summits and in climate pledges, the administration has urged countries to ramp up oil production and upheld permits to allow construction of pipelines, like Line 3 in Minnesota, that threaten indigenous lands and contribute to the rapidly increasing warming of the planet.

In New York City, as world leaders gathered for the UN General Assembly mere blocks away, hundreds of people marched through the Financial District to oppose the inadequate policies posed by these governments who defend the capitalist destruction of the planet. A particular focus of the march was the struggles being waged by indigenous communities across the country to stop the destruction of their lands and the dire social effects of ecocidal capitalist endeavors on their communities.

Ahead of national elections on Sunday, hundreds of thousands of people took part in protests in over 400 cities. After a lull in mobilizations over the last year due to the pandemic, protesters burst onto the streets across the country with renewed outrage.

In Berlin, over 100,000 people marched on the Parliament to protest the government’s indifference to climate change in one of the world’s largest emitters of greenhouse gases. Greta Thunberg had come from Sweden to address the march in the German capital. In Munich, 29,000 were on the streets.

In the capital city of Madrid, thousands of people marched with banners denouncing the state’s continued deference to the interests of capitalist projects across the country while millions of people live in poverty and face the consequences of capitalism’s destruction of the environment. One sign in the protest read, “Si el planeta fuera un banco, ya lo habrían rescatado!” — “If the planet were a bank, they would have already rescued it!”

Among the groups and organizations taking part in the demonstrations, the revolutionary socialist organization Contracorriente and the socialist feminist group Pan y Rosas marched with a clear anti-capitalist perspective, denouncing the role that capitalist governments in all their forms play in funding and protecting the freedom of corporations to exploit the world’s resources, and calling for their expropriation.

Hundreds of people marched through Buenos Aires to take part in the global actions. This year, a particular demand of the mobilizations was to put an end to an impending agreement between Argentina and China to make way for large-scale pig farming initiatives. This industrial farming puts pigs into overcrowded facilities and expends sizable resources to stuff them full of corn, soy, and antibiotics. The farms threaten to consume millions of gallons of water per day and create massive pollution.

Here member of the PTS and candidate of the FIT-U Myriam Bregman speaks about the destruction of the planet and the need for an anti-capitalist, socialist movement to take up the fight against climate change.

Calling on the government to halt new coal and gas projects, hundreds of students and workers marched throughout the country. As one of the countries most vulnerable to the unbridled effects of capitalism-driven climate change, these students are demanding deep structural and political changes to a system that puts the pursuit of profit ahead of a sustainable future.

Young people and environmental organizations, including La Agrupación Juvenil Anticapitalista or Anticapitalist Youth, gathered in the center of Mexico City to join the global call for the Global Climate Strike, one of the first large demonstrations since the onset of the Covid-19 pandemic. They marched to denounce the megaprojects promoted by the administration of AMLO and for justice for murdered environmentalists. Mexico is the second most dangerous country for environmental activists and land defenders.

The protesters faced a massive police presence as they marched towards the Zócalo.

In other cities of the country, such as Guadalajara and Mérida, youth organizations also demonstrated against megaprojects such as the Mayan Train and the Dos Bocas Refinery.

Protests took place in the country’s major cities, drawing hundreds of people into the streets. ​​The protesters denounced the destructive policies of the Bolsonaro government, which has pledged its allegiance to agribusiness interests and facilitated the deforestation of the Amazon at incredible rates, the highest in the country’s history.

Over 200 demonstrators gathered outside the Parliament in Cape Town on Friday to demand that the government take urgent action against climate change. The Climate Strike was another in a weeklong series of environmentalist actions by organizations across the country.

Tens of thousands of people poured into the streets to take part in this year’s climate strike, including 20,000 people in Turin and over 10,000 people in Rome.

Of particular note were the demonstrations held in the Philippines this year in the country’s biggest cities. Over a hundred students and activists risked severe repression in a socially-distanced protest in the capital city of Manila to protest President Duterte’s disastrous denialist and environmentally destructive policies, such as the lifting of a nine-year ban on new mining agreements. Climate activists and land defenders are particularly targeted by the government; just last year, 29 activists were murdered by the state. Nevertheless, young people and workers across the country took part in the protests.

The climate emergency has already reached the Philippines, which, according to a 2019 report by the Institute for Economics and Peace, is positioned to be the country most affected by climate impacts and extreme weather events.

Hundreds of demonstrators gathered in Parliament Square in London, many of them students who walked out of school to participate in the actions. They marched through Westminster to demand divestment from fossil fuels and urgent action to combat global warming and the climate emergency.

In Dover, Climate activists blocked the United Kingdom’s busiest trucking port. Dozens of activists sat in the street to prevent traffic from coming in and out, disrupting the port’s operations. The police were quick to clear the scene; 39 people were arrested.

The call of this year’s Global Climate Strike was to #UprootTheSystem. It is a recognition of the deep structural causes of climate change that allow massive corporations and militaries to make our planet collateral damage in the quest for new markets and infinite profit; it is a recognition that the effects of climate change are deeply rooted in the racist, sexist, and oppressive structure of capitalist society.

But to truly “uproot the system” means to destroy this system and the economic conditions that make it possible, once and for all. It means destroying capitalism, not desperately trying to reform it and buy ourselves a few more years. We can no longer deny the urgency of the need to build a society that puts nature and life first, free from exploitation and oppression. But to do that, we need a force capable of standing up against the capitalists and their governments who make promise after promise of “green” initiatives that will do little more than mitigate climate change and create new markets for capitalist projects.

Even the Green New Deal, a major theme throughout the Climate Strike protests, is not enough; not only do the big parties of capital put all possible obstacles in the way of the realization of these demands, but the program keeps the mega-corporations responsible for the current ecological crisis in control, giving them generous subsidies that will only be used to further ravage the planet.

We need an independent movement led by the working class — the class that is positioned to put an end to destructive capitalist production — in alliance with the combative movements of the youth, indigenous peoples, and all oppressed to take up the fight against climate change and fight for a society that is capable of rationally planning the world economy to make it more sustainable for many generations to come.