The corruption in Mexico City and the recent Subway scandals

In recent days, three former officials of the Mexico City Subway Project were arrested and charged with “illegal use of powers” in the construction of Line 12; more specifically for giving out contracts for services that had never been opened for bidding and for withholding millions in contributions. 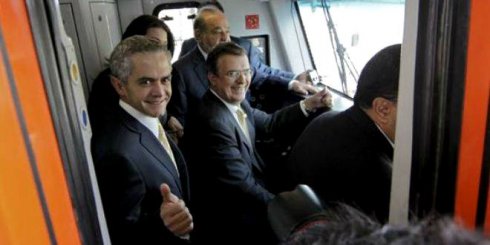 Also, the Mexico City Attorney General (PGJDF) issued arrest warrants for the former director of the Subway Project, Enrique Horcasitas, and two of his colleagues. The Attorney General and Interpol (international police) are taking part in the search for the accused. ,

These actions are being taken more than two years after the allegations of corruption in the construction of Line 12 were made public. The corruption was carried out during the Marcelo Ebrard administration, and during which Miguel Ángel Mancera served as a prosecutor. Both Mancera and Ebrard became Mayors of Mexico City representing the Party of the Democratic Revolution (PRD).

Looking to change their image…

After the June 7th midterm elections, the Mancera administration took on a new political operation to try to improve the leader’s image and prepare him for new challenges ahead.

It must be noted that Mancera, who received more than 63% of the votes in the mayoral elections in 2012, has proven to be one of the main causes of PRD’s recent downfall in the city. The PRD barely received 20% of the votes, lost several parliamentary seats, and became a minority in the Mexico City Legislative Assembly for the first time in 18 years. In contrast, López Obrador’s National Regeneration Movement (MORENA) emerged as the main political force in the city, with more local parliamentary force than the parties that backed Mancera in 2012 combined.

The reality is that the PRD’s downfall cannot be blamed solely on the Mayor. While he himself contributed to the political costs —for example, the increase in subway fare and the repressive actions taken in demonstrations— the fall is also a consequence of the “Sol Azteca”(the PRD is also know as the “Aztec Sun”) ominous participation in the Pact for Mexico and their involvement in the disappearance of the 43 Ayotzinapa normalistas.

However, a few days before the election, Mancera surprised everyone by announcing his intent to run for president in 2018. He surprised everyone because many saw that the political career of the former prosecutor was close to its end. Speaking to the media, he said that if the PRD does not nominate him, he would run as an independent candidate. He is weighing on the fact that, in its current crisis, the PRD does not have any viable candidates to face López Obrador in 2018. Mancera knows that he still has 3 years until the elections and, from his mayoral seat, he’s betting on a party structure that is full of clashes and disputes between the different tribes.

As one journalist says, without considering Mancera’s announcement, it’s difficult to see his greater plan; we’re witnessing a real political operation to restore the figure and the legitimacy of the government of Mexico City. In recent days, Mancera asked his whole cabinet to quit, after which he announced that he would “ease” the program “Hoy no circula,” (the program that regulates which cars can drive in Mexico City on Saturdays).

It’s within the context of this political turmoil that the Line 12 construction scandal emerged, and they’re looking for scapegoats to blame for it. Mancera’s declarations that Ebrard would not face an arrest warrant demonstrates the “solidarity” between them, for now. However, this could quickly change based on the scandal and its ramifications. It’s clear that the previous government, in which Mancera occupied a high rank, could not have been oblivious to the corruption taking place in a project as important as the Subway. The state officials and the “political class” are the ones who guarantee big business to the capitalists while benefiting from it in the form of “shares” and privileges.

… And continue their “business”

The previous administration’s magnum opus turned out to be a network of big business for construction companies — a characteristic seen throughout the years of the PRD administrations, including that of Lopez Obrador—, extremely high payments to survey companies, and corruption amongst the officials involved. Despite the fact that the infrastructures project was intended to be the springboard for Ebrard’s ill-fated presidential race.

The immediate result was the suspension of important sections of Line 12 that are used by millions of people from the working class causing them to have to travel in poor conditions to their homes and jobs. To top it off Mancera’s government raised the metro ticket 66% (from MX$3 to MX$5).

As mentioned above, he is now looking to rebuild an image that was full of corruption scandals in recent years and was weakened by the PRD’s electoral downfall. But in the meantime … Mancera has announced that (ICA), a company responsible for the construction of the sections of the Subway that are now suspended, would participate in the extension of Line 12. A second option is the Spanish OHL, which has been involved in corruption scandals with judges and the current administration as well as its predecessor- headed by Enrique Peña Nieto himself.

Behind the scenes of the Mancera administration’s “investigations”, is a continuation of providing business to large companies through corruption and privileges for officials and the “political class”. Undoubtedly, there is a clear dissatisfaction with the PRI-PAN-PRD’s regime that has emerged over the last year and was clearly demonstrated in the results of the June 7 midterm elections. The coming weeks will tell if the same dissatisfaction, which today can be seen in the teachers’ demonstrations, will escalate again and shake this political regime.