“The CUNY PSC Contract is an 8,600-Word Capitulation.”

A CUNY adjunct writes about why he is against the PSC’s proposed contract. If you would like to write about why you are voting no, we encourage you to submit to [email protected] 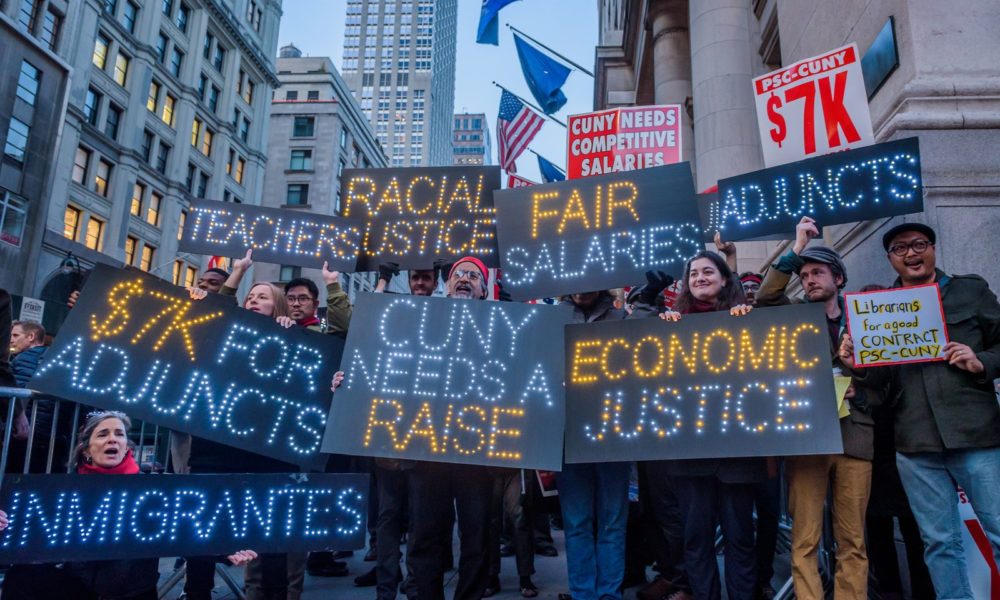 I celebrated my 43rd birthday this October by starting a new job as an adjunct lecturer at The City University of New York (CUNY) and also by joining a union for the first time in my life. It was a first because I have never worked at a place where union membership was an option. Joining the Professional Staff Congress (PSC) union at CUNY gave me a slight sense of relief. My union membership meant that for the first time there was going to be a workplace advocate for me should I ever need one. That sense of relief grew a bit stronger when right after I submitted my application to join the union I learned that the PSC negotiating team was in the process of bargaining with CUNY for our next contract.

I saw materials about union members’ demands for the new contract — specifically related to the 7K or Strike movement for adjunct faculty like myself — in a break room. I talked to some folks within the CUNY system who feel as I do, that the faculty, staff, and students at CUNY deserve much more from the institution and government overall.

On October 23rd, just weeks after I signed my membership application, the union announced that they had reached a tentative agreement with the university. Eagerly, I read the Memorandum of Agreement to see whether or not the union was able to win the $7,000 minimum per three-credit course for adjuncts that they had been fighting for and I was disappointed to see that they had not even come close.

According to the proposal, I would earn only $5,500 per three-credit course by 2023. That is far below a living wage for teaching today in New York City, nevermind over three years from now. As I continued to read, I saw that the contract would also load me up with new hours of work controlled by the university, forcing me to potentially have to take on student advisement duties and other tasks imposed by CUNY representatives. When I finished reading the proposed contact, I shook my head and rolled my eyes. The contract is an 8,600-word capitulation to the city and state that have been underfunding the university for decades.

We need a new vision for how we organize as workers at CUNY and across New York City. There has been a wave of contract negotiations across the country as of late that have employed tactics from the Bargaining for the Common Good framework. This framework centers racial justice in bargaining demands. It broadens the negotiating process beyond worker wages and benefits. And it engages the community as a whole.

If this proposed contract proceeds to the membership for a vote I am calling on all of my colleagues to vote no.

And beyond voting no, let us use this historic moment to prepare for a strike, a strike that challenges the cold, dead heart that is the Taylor Law, a New York State law that suppresses public sector worker dissent. Let us fight for a contract for all stakeholders at CUNY and all residents of New York City. Let us invite all New Yorkers to join our struggle. And let us not give up until our demands are met.