The Demands of the Attica Uprising

The Attica Prison Uprising began on September 9, 1971 and put forward demands that are still relevant today. 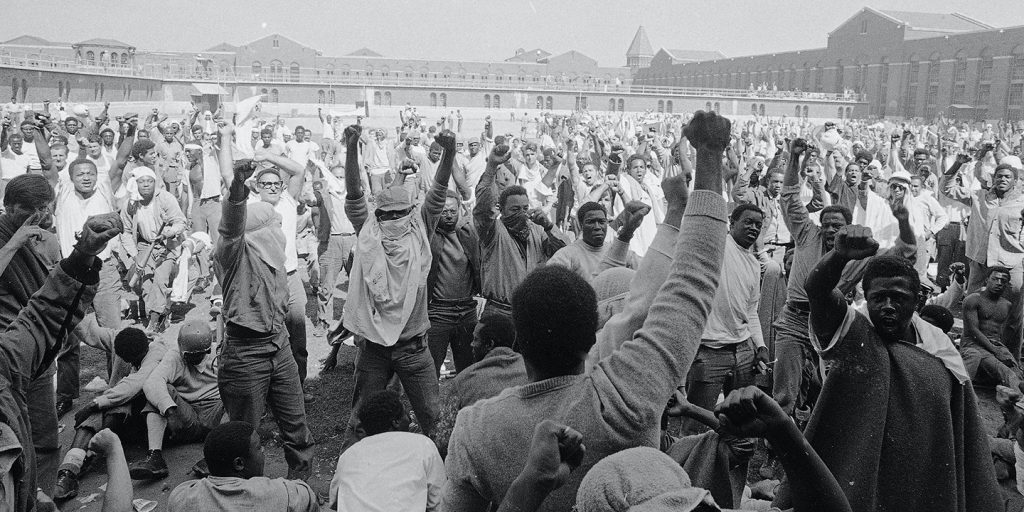 The Attica Prison Uprising began on September 9, 1971 and put forward demands that are still relevant today. Below are their demands:

1. We Demand the constitutional rights of legal representation at the time of all parole board hearings and the protection from the procedures of the parole authorities whereby they permit no procedural safeguards such as an attorney for cross-examination of witnesses, witnesses in behalf of the parolee, at parole revocation hearings.

2. We Demand a change in medical staff and medical policy and procedure. The Attica Prison hospital is totally inadequate, understaffed, and preju¬diced in the treatment of inmates. There are numerous “mistakes” made many times; improper and erroneous medication is given by untrained personnel. We also demand periodical check-ups on all prisoners and sufficient licensed practitioners 24 hours a day instead of inmates’ help that is used now.

4. We Demand an end to the segregation of prisoners from the mainline population because of their political beliefs. Some of the men in segregation units are confined there solely for political reasons and their segregation
from other inmates is indefinite.

5. We Demand an end to the persecution and punishment of prisoners who practice the Constitutional Right of peaceful dissent. Prisoners at Attica and other New York prisons cannot be compelled to work as these prisons
were built for the purpose of housing prisoners and there is no mention as to the prisoners being required to work on prison jobs in order to remain in the mainline population and/or be considered for release. Many prisoners
believe their labour power is being exploited in order for the state to increase its economic power and to continue to expand its correctional industries (which are million-dollar complexes), yet do not develop working skills acceptable for employment in the outside society, and which do not pay the prisoner more than an average of forty cents a day. Most prisoners never make more than fifty cents a day. Prisoners who refuse to work for the outrageous scale, or who strike, are punished and segregated without the access to the privileges shared by those who work; this is class legislation, class division, and creates hostilities within the prison.

7. We Demand that industries be allowed to enter the institutions and employ inmates to work eight hours a day and fit into the category of workers for scale wages. The working conditions in prisons do not develop working
incentives parallel to the many jobs in the outside society, and a paroled prisoner faces many contradictions of the job that add to his difficulty in adjusting. Those industries outside who desire to enter prisons should be
allowed to enter for the purpose of employment placement.

8. We Demand that inmates be granted the right to join or form labour unions.

9. We Demand that inmates be granted the right to support their own families; at present, thousands of welfare recipients have to divide their checks to support their imprisoned relatives, who without outside support, cannot
even buy toilet articles or food. Men working on scale wages could support themselves and families while in prison.

10. We Demand that correctional officers be prosecuted as a matter of law for any act of cruel and unusual punishment where it is not a matter of life and death.

11. We Demand that all institutions using inmate labour be made to conform with the state and federal minimum wage laws.

12. We Demand an end to the escalating practice of physical brutality being perpetrated upon the inmates of New York State prisons.

13. We Demand the appointment of three lawyers from the New York State Bar Association to full-time positions for the provision of legal assistance to inmates seeking post-conviction relief, and to act as a liaison between the administration and inmates for bringing inmates’ complaints to the attention of the administration.

14. We Demand the updating of industry working conditions to the standards provided for under New York State law.

15. We Demand the establishment of inmate worker’s insurance plan to provide compensation for work-related accidents.

16. We Demand the establishment of unionized vocational training programs comparable to that of the Federal Prison System which provides for union instructions, union pay scales, and union membership upon completion of the vocational training course.

17. We Demand annual accounting of the inmates Recreational Fund and formulation of an inmate committee to give inmates a voice as to how such funds are used.

18. We Demand that the present Parole Board appointed by the Governor be eradicated and replaced by the parole board elected by popular vote of the people. In a world where many crimes are punished by indeterminate sentences and where authority acts within secrecy and within vast discretion and given heavy weight to accusations by prison employees against inmates, inmates feel trapped unless they are willing to abandon their desire
to be independent men.

19. We Demand that the state legislature create a full-time salaried board of overseers for the State Prisons. The board would be responsible for evaluating allegations made by inmates, their families, friends and lawyers against
employers charged with acting inhumanely, illegally or unreasonably. The board should include people nominated by a psychological or psychiatric association, by the State Bar Association or by the Civil Liberties Union and by groups of concerned involved laymen.

20. We Demand an immediate end to the agitation of race relations by the prison administration of this State.

21. We Demand that the Dept. of Corrections furnish all prisoners with the services of ethnic counsellors for the needed special services of the Brown and Black population of this prison.

22. We Demand an end to the discrimination in the judgment and quota of parole for Black and Brown people.

23. We Demand that all prisoners be present at the time their cells and property are being searched by the correctional officers of state prisons.

24. We Demand an end to the discrimination against prisoners when they appear before the Parole Board. Most prisoners are denied parole solely because of their prior records. Life sentences should not confine a man longer than 10 years as 7 years is the considered statute for a lifetime out of circulation, and if a man cannot be rehabilitated after a maximum of ten years of constructive programs, etc., then he belongs in a mental hygiene centre, not a prison.

25. We Demand that better food be served to the inmates. The food is a gastronomical disaster. We also demand that drinking water be put on each table and that each inmate be allowed to take as much food as he wants and as much bread as he wants, instead of the severely limited portions and limited (4) slices of bread. Inmates wishing a pork-free diet should have one, since 85% of our diet is pork meat or pork-saturated food.

26. We Demand an end to the unsanitary conditions that exist in the mess hall: i.e., dirty trays, dirty utensils, stained drinking cups and an end to the practice of putting food on the table’s hours before eating time without any protective covering over it.

27. We Demand that there be one set of rules governing all prisons in this state instead of the present system where each warden makes rules for his institution as he sees fit.

We are firm in our resolve and we demand, as human beings, the dignity and justice that is due to us by our right of birth. We do not know how the present system of brutality and dehumanization and injustice has been allowed to be perpetrated in this day of enlightenment, but we are the living proof of its exis¬tence and we cannot allow it to continue.

The taxpayers who just happen to be our mothers, fathers, sisters, brothers, daughters and sons should be made aware of how their tax dollars are being spent to deny their sons, brothers, fathers and uncles of justice, equality and dignity.