Democratic Party primary candidates would like you to believe they care about immigrants, but their proposed reforms would do little to end the massive suffering, fear and death caused by the brutal immigration apparatus their party helped to build. 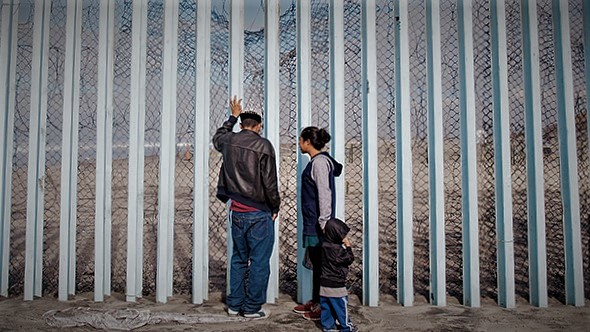 On June 23 Alberto Martinez and his almost two-year-old daughter Angie Valeria drowned in each other’s arms attempting to cross the Rio Grande from Mexico into the United States. The image of their dead bodies (which were found the next day washed up on the banks of the river) has since been shared worldwide, becoming yet another iconic symbol of the suffering and hardships faced by migrants and refugees everywhere.

Just a few days after these horrific deaths, 11 of the 20 Democratic Party presidential primary candidates, including Kamala Harris, Pete Buttigieg and Kirsten Gilibrand, along with a small army of photographers, aides and reporters, swarmed the private child detention facility in Homestead, Florida in an orchestrated—and some might say cynical—attempt to outperform their rivals for who could provide the most passionate denunciation of Trump’s family separation policy and the detention of migrant children.

While the candidates proffered empty platitudes about the “moral values” of the U.S. and stood upon ladders to yell words of solidarity to the detained children in Spanish, the US immigration machine, with the support of the Mexican government, was continuing to detain or turn away hundreds of immigrants and asylum seekers, forcing many to attempt the same deadly crossings that took the lives of Alberto and his daughter.

Standing side by side the candidates rightly criticized the Trump administration’s brutal immigration policies, which have detained hundreds of thousands of immigrants in often inhumane conditions, and which have led to the deaths of dozens of detainees, including several children. But they said nothing, unsurprisingly, of their own party’s complicity in the ongoing tragedy at the border. Kirsten Gilibrand, for instance, railed against allegations of sexual abuse at the private facility, but failed to say anything about the more than 4,500 reports of child sexual abuse in detention facilities filed during the second half of the Obama administration. Senator Harris, for her part, criticized President Trump personally, saying that he prefers to “beat people down rather than raise them up,” yet, as District Attorney of San Francisco, Harris colluded with the Democratic mayor Gavin Newsom to hand over more than 100 juvenile offenders into ICE custody despite the fact that San Francisco was then already a sanctuary city.

And, of course, none of the candidates said a word about their party’s often enthusiastic support for an imperialist U.S. foreign policy that has fueled rising immigration, or, despite what conservative columnists have claimed, anything about the need for open borders—the only real solution to the problem of immigrant deaths and detention. Indeed, although hundreds of immigrants have died in detention centers and in ICE custody over the last 25 years, the vast majority of immigrant deaths still take place while attempting to enter the U.S.. Since 1995 (two years into Bill Clinton’s eight year presidency) border crossing deaths have skyrocketed, and thousands of migrants, including hundreds of children, have died attempting to enter the United States, most from heat exhaustion and hypothermia or by drowning. And many of the worst years for such deaths occurred under the Clinton, Bush and Obama administrations, reaching as many as 500 a year in 2000 and 2005 and almost 400 in 2016.

Yes, Trump’s anti-immigrant rhetoric is disgusting, and zero tolerance policies have exacerbated abuses within the immigration system, leading to longer detentions and more family separations. Yet, the horrors currently being visited upon U.S. immigrants are not new, nor are they merely the result of the establishment of the Immigration and Customs Enforcement (ICE) agency, which some Left-leaning Democratic Party candidates, such as Alexandria Ocasio Cortez have proposed eliminating. They are instead the product of longstanding bipartisan policies which have been driven by U.S. imperialism and the capitalist logic of closed national borders that divide the working class and create a permanent, vulnerable and hyper-exploited workforce of millions who are forced to live in fear and secrecy simply for being born in the wrong place at the wrong time.

And the Democratic Party has historically been responsible for or overseen the implementation of some of the worst immigration policies of the last 30 years.

It was only a little more than two decades ago that the administration of Democratic President Bill Clinton laid down the foundation for the mass deportation and detention apparatus that exists today. In 1992, Clinton ran for and won the presidency on a centrist platform that promised to put people first, but his administration wound up passing instead a series of conservative bills that gutted welfare, accelerated mass incarceration, militarized the southern border and sharply increased deportations.

One of the most harmful, but often forgotten of these bills, was the Illegal Immigration Reform and Immigrant Responsibility Act (IIRIRA). Wanting to be seen as tough on crime as well as “illegal immigration,” in his 1996 State of the Union Address Clinton argued that Americans had a right to be upset about the rising number of immigrants entering the country and vowed to deport twice as many “illegal immigrants” as before. Just 9 months after this speech, Clinton signed the immigration reform bill, which had passed both houses with wide support from Democrats.

The new legislation did several things that directly and negatively impacted the lives of U.S. immigrants. First it greatly expanded the definition of what an “aggravated felony” is, making it much easier to deport legal and illegal immigrants who had committed crimes of almost any kind. This meant many more deportations. These new definitions, to the consternation of immigrant rights activists and even the supreme court, were also applied retroactively, meaning that many immigrants, even those who had lived in the country legally for numerous years, were suddenly subject to deportation. And indeed, almost one million immigrants were deported during Clinton’s tenure. Secondly, the bill provided more authority and funds to build additional border security, including the construction of border walls in areas with the most crossings, forcing immigrants, including those that may have been recently deported, to seek out more and more dangerous paths across the border. This policy alone has been directly responsible for the deaths of thousands of immigrants who have died attempting to cross the border. Lastly, the legislation laid the groundwork for cooperation between local and state officials in the apprehension of supposedly “illegal” immigrants, paving the way for the massive raids of the George W. Bush administration.

In short, Bill Clinton, more than any other president, provided the framework and the infrastructure needed to hyper-charge US immigration enforcement and deportations just in time for 9-11 and the neo-conservative Bush administration.

Likewise, Democratic President Barack Obama, who came to office in 2009 vowing to reform the US immmigration system, nonetheless went on to become what Immigration activists have called the “deporter in chief.” In his eight years in office Obama deported more immigrants than his predecessor George W. Bush, who had himself deported more immigrants than any previous administration. These numbers, however, are complicated, due to the fact that many more immigrants who were apprehended at the border and who opted for voluntary return were being booked and charged with the crime of illegally crossing the border, a new practice under Bush that was dramatically increased during the Obama years. Although this accounts for much of the increased deportation numbers under the Obama administration when compared to Bush and Clinton, the massive increase in such “formal removals,” as they are called, has meant that many more immigrants attempting to cross a second time would have criminal records, a fact that has been exploited by the Trump administration to deny residency or asylum requests to thousands.

However, although the overall total number of deportations under Obama is hard to compare to other administrations, the number of internal non-citizen removals did increase significantly thanks in large part to Obama’s expansion of the Secure Communities program originally created under the Bush administration. Under Obama, internal non-citizen removals totalled almost 3.1 million, more than a 50% increase over the eight years of the Bush administration and more than three times the number removed by Clinton. Playing the law-and-order card, Obama and his supporters have argued that these were not families but criminals that were being removed. However, as immigration activists have consistently shown, the Secure Communities program resulted in the removal of significant numbers of mothers, fathers, sons and daughters who were guilty of little more than minor traffic or immigration violations, and many who had been convicted of no crimes whatsoever. Furthermore, huge numbers of those deported were never given legal representation of any kind.

And now, after years of supporting the Democratic Party and/or voting to fund ICE, the 2020 Democratic Primary candidates want you to believe that the outrages perpetrated by the current administration can be solved by voting for yet another Democrat. But history has shown that even the most well-intentioned politicians have found themselves incapable of addressing the fundamental problems of immigration, not because they don’t have the right ideas or because they lack the political support of their constituents, but precisely because they are, by virtue of their relationship to the state, unable to challenge the logic of closed national borders, which inescapably leads to the creation of legal and illegal human beings.

The Capitalist Logic of Closed Borders

Decriminalizing border crossings, closing down private detention facilities and giving immigrants access to public programs such as universal healthcare, as some Democrats have proposed, would indeed be a positive development. However, we’ve seen such promises on the campaign trail before, and what Democrats give with one hand, they usually take away with the other.  Furthermore, it is clear that the horrors of the US immigration apparatus cannot simply be eliminated through any series of reforms, since all such reforms inevitably rest upon the basic premise of closed national borders, a concept that has remained unchallenged by even the most “progressive” members of the Democratic Party, none of whom have argued for open borders.

That is because getting rid of closed borders requires a direct confrontation with the logic of U.S. capitalism, since U.S. firms and employers make billions off of the hyper-exploitation of undocumented and frequently unorganized immigrants, who are often forced to work under harsh conditions for less than minimum wages precisely because they can be easily deported or fired. Furthermore, the very existence of such an “illegal” workforce drives down wages and weakens the organizing power of labor more broadly, which only benefits the exploiting classes. And this is not something that can be fixed by simply increasing immigrant rights. Building a united working class capable of fighting capitalism requires nothing less than open borders. As Suzy Lee explains:

While it is certainly true that the magnitude of the chilling effect can vary depending on the aggressiveness of workplace immigration enforcement tactics, the effect itself is the logical consequence of any system that restricts migration. No matter how generous it may be with regard to the rights extended to entering migrants, the problem arises the moment entry and access to employment is made conditional on permission of some kind: a “legal” status begets an “illegal” status, and as long as those deemed “illegal” are subject to expulsion or deportation, that status will be an obstacle to organizing.

As Socialists, we should demand and work for the complete elimination of national borders and a united international working class that transcends nation states. Towards this end, Democrats are not and will never be our allies.