The current state legislature in New York State is being heralded as “historically progressive,” and many unions and community organizations have high hopes for what they may be able to achieve in Albany. Organizing for direct change, using our strategic positions as workers, has the potential to be much faster and more effective than lobbying politicians. 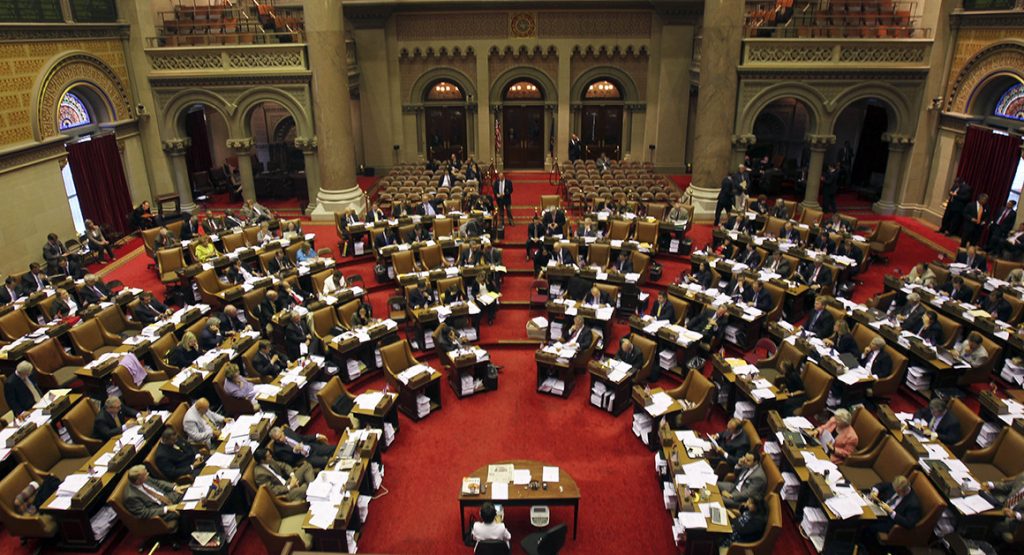 New York progressives rejoiced in November as Democrats gained supermajorities in both houses of the state legislature, with several of the new senators and representatives endorsed by the DSA. Supermajorities are veto-proof, and many hoped — and still hope — that the new balance of power would mean a strong challenge to the more conservative Democrat Governor Cuomo and the ability to quickly pass a wide range of progressive legislation. This is similar to the honeymoon period currently being enjoyed by Biden and the Democrats in Congress; many liberals and some progressives have taken the conclusion that now that the election is over, they can relax and let the politicians take care of everything.

Democrats at all levels of government worked hard to convert the energy from the summer BLM protests into momentum for the November elections. At both the federal level and at the state level in New York, electoral wins reinforced hopes in this strategy. Now, many unions and community organizations are doubling down their focus on lobbying, entranced by the illusory promise that a bourgeois government will ever work for the interests of the working class in the long-term. The choice to focus their money, time, and energy on electing Democrats also means that the DSA has spent months — and significant dollars — directly supporting a capitalist, imperialist party. Whatever reforms come from the electoral wins come at the cost of other people’s suffering: the immigrant children being kept in detention centers, the people killed by U.S. bombs overseas, and the hyper-exploited incarcerated people forced to manufacture goods for the state, to name a few examples.

On a very basic level, however, a supermajority of Democrats does not at all mean a supermajority of progressive Democrats. We can see how this plays out in Congress: several of the more conservative Senate Democrats prevented the $15 minimum wage hike from being included in the new stimulus bill and successfully argued for lower unemployment benefits than in the previous version of the bill.

But let’s pretend that the New York legislature is filled with progressives. All of them would still face the same conservative pressures that face anyone looking for a career within the Democratic party. They need to build relationships, curry favor with other elements of the party, and appeal to different funding sources. Many will be concerned about running for re-election, which means facing off against other Democrats in the primaries, and not just Republicans. Again, we can look to the federal government for examples: AOC and the rest of the Squad, despite their progressive positions on many issues, have repeatedly voted for military spending bills and for funding coups and other imperialist projects.

In the real world, with the real state legislature, the question is not, “What has the Democratic supermajority been doing to push back against Cuomo?” but “Will the Legislature Re-assert Itself Against Cuomo?”. So far, they have repealed the so-called “Walking While Trans Ban,” an anti-loitering law primarily used to harass trans women, but it remains to be seen what else will come from this “historic” legislature. More than 150 advocacy groups signed onto the “Justice Roadmap,” a criminal justice reform-oriented legislative agenda, but — in a twist that is surely accidental but nonetheless illustrative of the futility of reformism — the website for the Justice Roadmap is currently expired, only three months after the Roadmap was released.

State Senator and DSA Member Julia Salazar, who is now the chair of the Crime Victims, Crime, and Correction Committee, says that criminal justice reform is “a really strong interest” for her, yet so far her big move has only been to start conducting surprise visits at New York jails and prisons. She is interested in restricting the use of solitary confinement, making incarcerated seniors eligible for parole, and making sure the prisons are following Covid-19 safety requirements. Certainly each of these reforms would benefit the people who are affected, but none of them address the root of the problem: the state is forcibly holding people, many of whom have been convicted of no crime at all or held on “technical violations,” in terrible conditions against their will, and using them as hyper-exploited labor to produce things like hand sanitizer. Prisons and jails are tools used by the government to oppress people, period. No amount of reforms can change that.

Another example of misplaced hopes in lobbying is the push to pass the New Deal for CUNY. The primary goals of the bill over 5 years are to eliminate tuition for all in-state undergraduates, hire more mental health counselors and academic advisors to meet recommended ratios for students, hire significantly more full time faculty and pay adjuncts salaries comparable to full time faculty, and invest significantly in CUNY’s capital budget to update the university system’s infrastructure. All of these goals represent meaningful positive changes for students, faculty, and staff at CUNY.

The New Deal for CUNY is currently still in committee in both the Assembly and the Senate. Its collective co-sponsors represent about 10% of the legislature. At this stage, it’s unclear how much more traction the bill will get. The bill would add new costs to the state budget, and so far the legislature has been reluctant to raise taxes on the rich even to pay for New York’s current needs under the pandemic. Others are concerned that senators and assemblypeople representing districts outside of New York City will be unlikely to support the bill. Currently, there is no sister bill demanding similar changes for SUNY, the public university system serving the rest of the state.

In this case, the bill itself is not the problem, but the methods by which the Professional Staff Congress (PSC), CUNY’s faculty and staff union, is trying to achieve these goals. Rather than rallying workers together in conjunction with students to directly demand better working and learning conditions, the union is instead encouraging members to engage in large-scale phone banking, social media actions, and other forms of digital lobbying. Such tactics emphasize reliance on the organs of the state, rather than our own collective power as workers. CUNY does need free tuition, more support services for students, better jobs for faculty, and renovations to its crumbling — and sometimes dangerous — buildings.

Throwing our energy into first electing lesser-evil officials and then pressuring them to vote for policies we want is not only a disempowering (and often ineffective) strategy, but it’s also an inefficient one. Organizing for direct change, using our strategic positions as workers, has the potential to be much faster and effective. It’s also not a one-trick wonder, after which organizers have to start all over again convincing politicians to vote on another bill. Building collective power through organizing ourselves and winning struggles makes us stronger and all the more prepared to fight and win the next battle. This is why Trotsky calls class struggle a “school of war.” Electoral politics can be useful only when the candidates are from working class parties, not beholden to bourgeois interests or the pressures outlined above. Even when revolutionary socialists do not win their races, the campaign can still be a useful opportunity to share their politics and serve as tribunes of the people.

The workers and students of CUNY, allied with the rest of New York City and our colleagues and classmates at SUNY, have the potential to create significant change — not through the legislature, but through our own strength. The same is true on issues of criminal justice, although we saw this summer how even widespread militant energy can be co-opted back into organizing for the Democrats. This strategy is not necessarily easy or simple, but it is both more powerful and preferable.