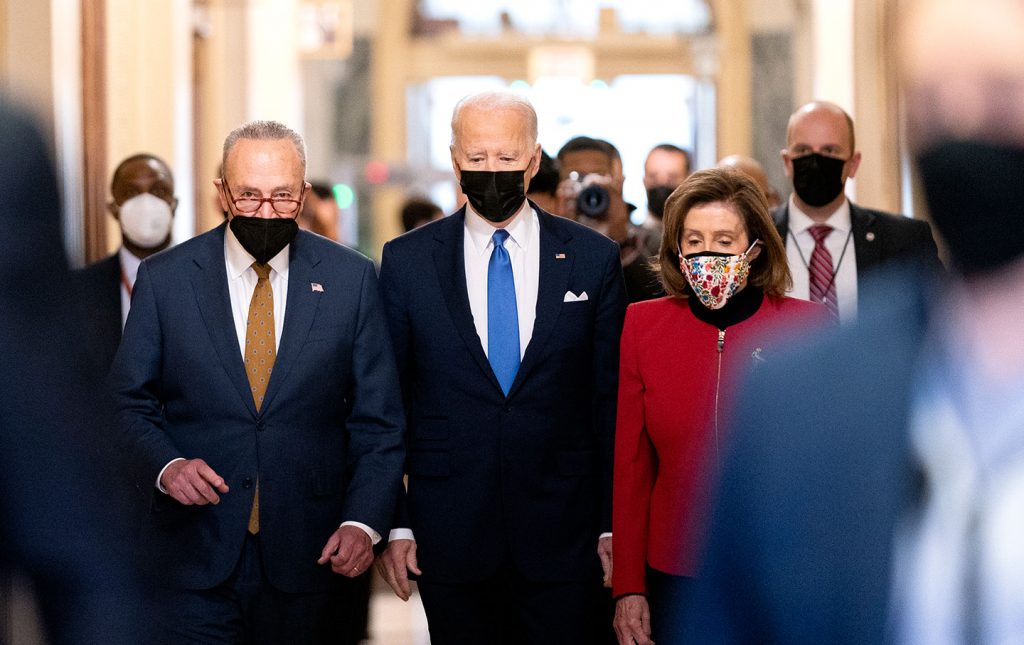 One year into the Biden-Harris presidency, the gap between the politicians’ campaign promises and their actions in office could not be more stark. Despite mainstream media outlets heralding Joe Biden as a “modern FDR,” his party has accomplished next to nothing of his ambitious agenda. It can be tempting to chalk these failures up to the Democrats’ ineptitude and lack of resolve. However, the truth is more complicated: the Democrats’ aren’t bad at politics, it’s their imperialist, capitalist politics that are bad.

The latest blow to Biden’s agenda came last week when Senators Joe Manchin and Kyrsten Sinema effectively torpedoed his voting rights legislation by once again opposing the abolition of  the filibuster, a rule which requires 60 votes to pass most laws in the Senate. Three weeks earlier, Manchin also tanked the $1.7 trillion Build Back Better bill — the centerpiece of Biden’s agenda — despite it being whittled down to barely half of its initial amount. Beyond the pandemic stimulus package from March and November’s infrastructure bill, Americans would be hard-pressed to identify any meaningful progress on Biden’s campaign promises.

Democrats’ year-long streak of failed legislation is all the more jarring when recalling the chorus of voices claiming that Biden would be the most transformative president in over 50 years. Among his campaign promises were a $15 minimum wage, a public option for healthcare, student debt forgiveness, and other proposals that were significantly more progressive than they had been under previous Democratic administrations. Biden’s supposed transformativeness was even used as a cudgel against the Left, with pundits claiming that Biden — unlike leftists — had a winning strategy for progressive change.

Sign Up for a Zoom Discussion on Biden’s First Year in Office: Saturday 3 pm EST

Predictably, many of these “transformative” campaign promises have been watered down beyond recognition — sometimes brazenly so, as when Biden claimed that a $1,400 check, combined with the $600 one distributed during the Trump presidency, equaled $2,000 in stimulus payment facilitated by his administration. Other proposals vanished completely into the ether, like a public option for health care, paid parental leave, and cheaper prescription drug prices. Even promises that Biden could implement through executive order, like student debt forgiveness, have seemingly been nixed: loan repayments are expected to resume in May.

And whereas Biden levied harsh criticisms against the Trump administration’s poor management of the coronavirus pandemic, saying that a president who presides over 200,000 deaths should not remain in office, but his response has been much of the same: putting corporate profits ahead of human life. Although the administration recently announced, after heavy criticism over its inaction, that it will provide 500 million free Covid-19 tests, it is refusing to take other measures that would help end the pandemic and alleviate suffering, like releasing vaccine patents or passing universal paid sick leave.

The Democrats and the bourgeois press have had no shortage of excuses for why the Biden administration has not been able to pass its key legislation (or, indeed, almost any legislation at all). Conservative Democratic Senators Manchin and Sinema have been singled out as the “rotating villains” or party scapegoats du jour. However, the Build Back Better bill was all but guaranteed to fail when the bipartisan infrastructure bill was passed first with no strings attached. Clearly, this was a risk that the party was willing to take in exchange for a legislative victory.

Also to blame, according to Democrats, is Senate parliamentarian Elizabeth MacDonough, who rejected proposals for a $15 minimum wage and the party’s proposed immigration legislation. Notably, the (unelected) parliamentarian’s rulings are non-binding, and the Democrats could replace her at any time. Instead, they play the role of hapless victim at the mercy of insurmountable obstacles that are, in fact, easily surmountable.

Progressives and even leftists lament the Democrats’ poor political acumen, questioning why they don’t simply, for example, ignore the parliamentarian’s rulings, force Manchin and Sinema to fall in line, and reject bipartisanship. After all, for the first time in ten years, the Democrats hold the presidency and majorities in both chambers of Congress; why can’t they pass laws that large majorities of workers support?

In fact, it’s worth reflecting on what the Democrats have accomplished in recent years. They successfully co-opted the 2020 uprising against police violence and channeled popular outrage to the ballot box for Joe Biden. They united to block Bernie Sanders from clinching the nomination from the party’s left wing, and are skilled at stopping progressive campaigns in their tracks, like those of India Walton and Nina Turner, moving them to become “pragmatic progressives” instead.

The Democrats are always able to pass exorbitant military budgets, most recently passing the largest one since World War II, and secure support and funding for Israeli violence toward Palestinians, even from progressives. Both domestically and internationally, Biden has been successful at shoring up support for his rivalry with China as part of his project of restoring U.S. imperialism and hegemony to its former glory. While the Democrats pretend that their hands are tied when it comes to programs to help the working class and oppressed, there is seemingly no limit to funding or political will when it comes to imperialism.

Likewise, the Biden administration has had no problem continuing — and even expanding — inhumane Trump-era immigration policies. Last month, the president reinstated the so-called “Remain in Mexico” policy in which migrants seeking asylum in the U.S. are detained in Mexico while their applications are processed. In a deal with Mexican president Andrés Manuel López Obrador, all migrants from the Western hemisphere are now forced to stay in Mexico pending approval of their asylum applications. These squalid detention centers are dangerous, particularly during a pandemic, but the Democrats have largely succeeded in quelling outrage over kids in cages.

Put simply, Democrats can be very effective when it comes to furthering their capitalist and imperialist interests. The reason why they don’t fight tooth and nail to pass progressive legislation — and the reason why the party will never be a vehicle for socialism — is that it’s not in their interest to do so. This is precisely why the party is the graveyard of social movements.

This is not to say that Democrats are hoping that their entire agenda fails. Some politicians have been frustrated by the lack of progress during Biden’s first year, and are hoping for a “reset” in 2022. But as always, to the extent that the Democrats care about a political issue, it’s so that they can win at the ballot box. After all, even if the party’s corporate backers are content with business as usual, its base — especially working-class voters and people of color — expect at least some crumbs in exchange for votes. The Democrats are worried that the perceived inaction will cost them in the 2022 midterm elections, where they risk losing control over the Senate, House of Representatives, or both. They are not actually worried about materially improving the conditions of the working class and oppressed.

We cannot be under any illusion that the solution to this inaction and ostensible gridlock is to “vote harder” for Democrats. As we have written before, the Democrats perform this two-step every single time: they make progressive promises and co-opt movements to win elections, and then, once they are elected into office, break their promises and feign helplessness. Even under Democratic congressional supermajorities during the Obama administration, Democrats found excuses to avoid passing progressive legislation.

We must also refuse to put our faith in this extremely undemocratic system — one where senators can single-handedly torpedo legislation that the majority of the population supports. Instead of fighting within the undemocratic institutions of the U.S. state that exist to uphold capitalism and imperialism, we need to take our fight to the streets and to our workplaces to demand change. Neither the Democrats nor Republicans will hand the working class anything unless we fight for it.

One Year of Biden