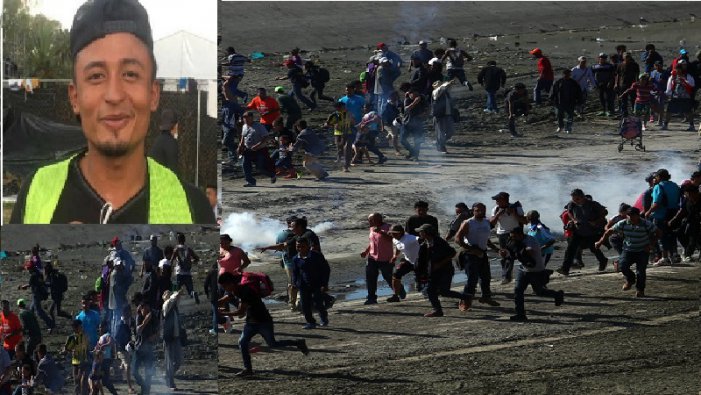 Víctor Ricardo Mejía Martínez, 26, is a Honduran migrant who traveled with the Migrant Caravan. During his time in Mexico he collaborated with La Izquierda Diario—one of the few alternative media outlets providing accurate, on-the-ground reporting on the caravan.

On November 21, Víctor was arrested while recording the arrival of trucks at the Benito Juárez shelter in Tijuana. His arbitrary arrest was made under the pretext that Víctor was illegally documenting what was going on around him. Víctor was beaten by the police and was only able to communicate with La Izquierda Diario by cell phone.

While detained, he was never given the right to a phone call. Through our network of human rights organizations and activists in Mexico and other countries, we learned that he was being held in Tijuana, on false charges, and that he would soon be deported. We then learned that he would arrive on November 30 at Agujas, an immigration station in the Iztapalapa borough of Mexico City.

When Víctor arrived in Tapachula, he met with the Comisión Nacional de Derechos Humanos (CNDH), a national human rights commission. After Víctor’s case became public, the CNDH pressured the authorities to follow up on the complaint filed for serious human rights violations. Víctor said he had signed the “assisted return” only because the conditions of the Agujas immigration station were so terrible that he preferred to return to his country than stay there and suffer the brutality of the police. But he filed his complaint with the CNDH to hold accountable the police and state agents who violated his and other migrants’ human rights.

Víctor’s Case Is Not Isolated

What happened to Víctor Mejía has happened to thousands of Central American migrants. In the interest of getting along with the United States, the Mexican state arbitrarily arrested Víctor in order to add him to the growing list of deportees. This campaign of criminalizing migrants is reinforced by the local government in Tijuana.

By preventing Víctor from communicating with people outside the detention facilities, the authorities were able to generate uncertainty about his safety. In this isolated state, he could have easily become a victim of torture or forced disappearance. He was prevented from having legal representation and therefore prevented from knowing his rights. He only knew of his imminent deportation and was told if he did not sign the “assisted return,” he would have to spend months in detention. Knowing that life in the detention centers meant months of abuse in squalid conditions, Víctor did not think he had any choice but to sign.

In Víctor’s case, this “friendly” policy of “assisted return” was actually a string of human rights violations—false imprisonment, restriction of his freedom of speech, damage to his physical and psychological health and obstructing his right to legal counsel. On paper, assisted return looks like a diplomatic version of deportation, in which migrants “voluntarily” return to their home country—but the reality is that many of the migrants sign the papers under the physical and psychological intimidation of the authorities.

The Mexican government seeks to ingratiate itself with the Trump administration—playing the role of the U.S. immigration—by promoting xenophobic and racist discourse and criminalizing migrants seeking a better life for their families.

On December 2, both the U.S. military and the Mexican police made a strong show of force against the migrants at the border. They stopped about 100 migrants who tried to cross the border for “being violent.” In previous days, the government of Tijuana started detaining migrants in a facility, under false pretenses, in order to deport them all back to their countries of origin—regardless of the their reasons for seeking asylum.

La Izquierda Diario México would like to thank those who have acted in solidarity, shown support with signatures, provided videos and diverse demonstrations of support, at the national and international level, for all the repressed and detained migrants; we would like to thank Víctor, in particular, as well as those who collaborated to help find him and communicate with him. Thousands of people joined the signature campaign to demand the immediate release of Víctor and the other detained migrants.