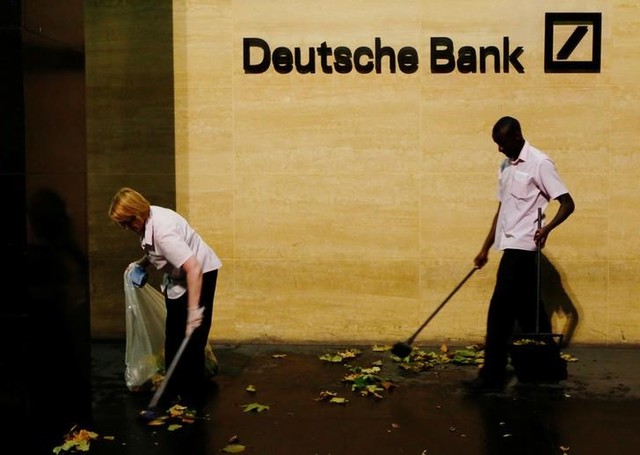 Deutsche Bank (DB) shares plummeted in early October after the shocking Wall Street Journal (WSJ) report that the U.S. Department of Justice was about to impose a record fine on the German banking giant.

Shares fell to their lowest level in over 20 years due to a market panic driven by the fear that the bank cannot pay the huge fine. On September 30, shares fell further when reports surfaced that hedge funds had stopped doing business with the bank. They subsequently rose due to rumors that the US was prepared to reduce the fine by 5.4 billion dollars– a possible ceasefire in the financial and economic war waged on both sides of the Atlantic.

Deutsche Bank: The Lehman of the world public debt bubble

Deutsche Bank is to the global public debt bubble what Lehman was to the U.S. mortgage finance bubble. In other words, Lehman was the catalyst. However, the root of the problem was billions of depreciated assets, the presence of unsustainable housing prices, and the deep structural deterioration of the U.S. mortgage market in both financial and economic terms.

Today, DB is much larger than Lehman was in 2008, and its tentacles are everywhere. The financial scope of the public debt bubble is several times that of the mortgage finance bubble.

This bubble has grown exponentially as a result of a threefold process:

Finally, since world stock exchanges have become very volatile, investors continue to see public debt as the only haven to take refuge against the strong storm that could hit variable income in a not so distant future.

The strong demand fueled a vicious circle: insufficient supply of government bonds, price increases, and drops in nominal yields. This has created a huge bubble in the government bonds market, where investors risk immense losses in their portfolios if these conditions of exceptional liquidity change suddenly.

Therefore, the crisis of the DB is not just the latest chapter in the endless banking crisis in Europe. Rather it is globalization’s largest crisis, one which has hit international banks particularly hard.

As one WSJ analyst puts it: “Long before anti-globalization became a fashionable political cause, financial policy makers had already vowed to ‘take back control,’ forcing banks to insure themselves against future crises by carrying far-higher levels of capital and by ringfencing operations. The resulting fragmentation of the financial industry has piled costs on banks, including Deutsche, which has been obliged to put its giant U.S. operations in a ringfenced U.S. subsidiary. Brexit is likely to lead to further fragmentation.”

“At the same time, banks have seen their revenues crushed by a double blow of stagnating global trade and reduced deal making, which has reduced the global investment-banking fee pool, and a new world of negative interest rates and flat yield curves. Both these trends also reflect challenges with globalization.”¹

Undoubtedly, the content of the U.S. decision to fine as well as the circumstances surrounding it point to a calculated move to strike Germany’s only major international bank.

There were political responses from Germany soon thereafter. Peter Ramsauer, the chairman of the economics committee of the German parliament, told the German newspaper Welt am Sonntag that the Department of Justice’s action against Deutsche “has the characteristics of an economic war.”

He added that the U.S. has a “long tradition” of using all available opportunities to wage what amounts to a trade war “if it benefits their economy,” and that the “exorbitant claims” made against Deutsche Bank are a case in point.

Markus Ferber, a Member of the European Parliament for CSU, the Bavarian sister party of Angela Merkel’s Christian Democrats, made a similar statement. He told Welt that the timing and size of the initial Department of Justice request against Deutsche suggested that it was a “tit for tat response” by U.S. authorities to the recent EU decision against Apple. Let us remember that last month, the EU ordered Ireland to collect 13 billion euros in taxes from the U.S. technology company, claiming that the current situation amounted to an illegal state subsidy to the company.

The German government is at a crossroads due to its tough stance towards the European banking crisis. Something which could return like a political boomerang in the case of an eventual bailout (although we are not yet there).

Meanwhile, prominent business leaders came out to support the banking giant without hesitation. Dieter Zetsche, the boss of the automaker Daimler-Benz, told the newspaper Frankfurter Allgemeine that “strong German banks are important to the strength of the German economy. This is a close relationship, and will remain so.” Johannes Teyssen, chairman of the energy company Eon, told the same newspaper that Germany’s role as a major exporter would suffer “if we have safe access to international capital markets only through banks in other countries.” Peter Terium, head of the other large German energy company RWE, said it is “important for us to have a global player like Deutsche Bank on our side” in the international market.

The underlying reason for the exacerbation of these conflicts is that, since the huge mass of fictitious capital far exceeds (or has no counterpart in) real wealth or capital, each section of financial capital must confront its rivals in an increasingly confrontational manner to eliminate them.

Thus, in the late 1980s, DB had tried to use the room for maneuvering created by the unification of Germany to go beyond its small domestic market. It expanded its retail business across an integrated Europe while simultaneously transforming itself into a global investment bank, competing aggressively with rivals, especially the U.S. banks.

Nothing better sums up their new ambitions than the bank’s charismatic CEO Alfred Herrhausen’s words in November 1989, just after the fall of the wall and 10 days before his assassination, that driven by the “great economic strength” of a reunified Germany, Deutsche was “destined to play an important role in global banking.”

But this financialization, where DB was competing against and imitating American giants like Goldman Sachs even in their criminal practices, took a huge blow with the crisis of 2007/8. Since then, U.S. banks have been strengthened by the U.S. government’s bailouts, while the financial strength of Deutsche Bank has ebbed. In the resulting political battle for new banking rules, DB has become one of the first casualties.

However Deutsche Bank is not the only target. The broader dimensions of the conflict were demonstrated by the European Commission’s (EC) vice president in charge of the Euro and Financial Services, Valdis Dombrovskis, who last week objected to raising the capital requirements that apply to banks.

This EC official rejected the U.S. proposal of “equating average risk weights worldwide.” He explains “a solution we could not support is one which would weigh unduly on the financing of the broader economy in Europe. We want to avoid changes which would lead to a significant increase in the overall capital requirements shouldered by Europe’s banking sector.” Without naming the USA directly, he added: “We want a solution that works for Europe and does not put our banks at a disadvantage compared to our global competitors.”

The crisis of Deutsche Bank and the ongoing financial war between the U.S. and Germany show how the insoluble contradictions of the capitalist economy have been exacerbated since the crisis of 2007/8. These contradictions have fueled geopolitical tensions and vice versa. In the aftermath of 2008, capitalism’s unstable nature and it’s tendency towards crisis, wars and revolutions has once again become apparent.