The Dollar on The Rise, the Teachers Upset and “El Chapo” Fugitive

The government of Enrique Peña Nieto (EPN) is besieged by the escape of “El Chapo,” the distrust of the main political agents, the precipitous rise of the dollar and the emergence of teachers in Oaxaca with the support of all states. 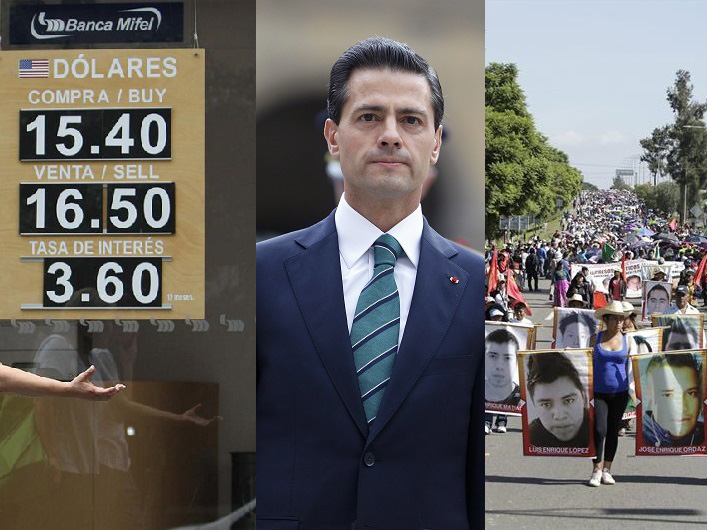 The president is alone

The government had been badly beaten by Ayotzinapa’s case and human rights violations in Tlatlaya, Apatzingan and Ostula, to mention a few. But, the escape of “El Chapo” has generated and disbelief among government’s staunchest allies and the US government.

As Jorge Carrasco posed for the magazine Proceso, “the president Enrique Peña Nieto is alone, after the escape of Joaquin “El Chapo” Guzman has further narrowed his circle of trust.” Beyond Aurelio Nuño, the head office of the Presidency, and Francisco Guzman, his chief of staff, the president has no one to trust.”

The two main figures of national security have lost their legitimacy. On the one hand, the Interior Minister, Miguel Angel Osorio Chong, who has “special powers” in the area of security, is directly responsible for the unusual escape of Guzman. On the other hand, Salvador Cienfuegos, Secretary of Defense, is responsible for the military attacks on civilians throughout the country. Even sectors that support the government, find it scandalous that a military convoy has gunned down and killed a child in the community of Ostula, Michoacan.

In this context, two issues add to the governmental crisis. The rise of the dollar, which this week reached the 16.55 pesos, generating anger within the halls of business within the country, and the viral news: according to the National Council for the Evaluation of Social Development (CONEVAL), 2 million of people fell into poverty during the last presidential term.

Moreover, the awkward statements by the head of the Ministry of Social Development, Rosario Robles Berlanga, contradicting CONEVAL, only deepened the frustration of the establishment, that sees the image of “stability for business,” supported by Pena Nieto, crumbling.

From the point of view of the dispossessed, the most convulsive element facing the Party of the Institutional Revolution (PRI) in power, it is [the teacher’s mobilization
confronting ->https://www.leftvoice.org/Oaxaca-teachers-resist-government-attacks] the extinction and military takeover of the State Public Education Institute of Oaxaca (IEEPO).

While the government was betting that the transfer of a large portion of the National Guard and Federal Police to Oaxaca would discourage the mobilization of teachers, the huge march of July 27 in the city of Oaxaca, with more than 60,000 people, shows that the combative Mexican teachers are not defeated and still have strong support among the masses.

Could it be possible that the brave Oaxacan teachers who staged the Oaxaca Commune in 2006 would be leading the fight against the government?

We shall see … today our duty is to be side by side with the teachers.