The Dream of Socialism Did Not Die With Fidel Castro

The media is quick to paint the death of Fidel as the death of not only a cruel dictator, but also as the death of revolution. The youth and working class who are rising up all over the world show that this could not be further from the truth. 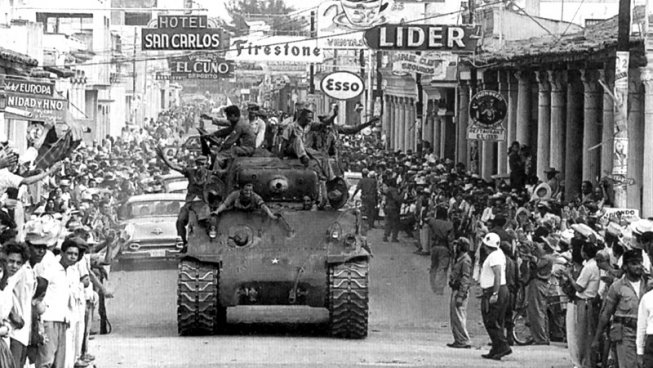 With the death of Fidel, 2016 has proven to be a year of unimaginable events, that is, until these events actually happen. We are then not only forced into imagining them but also confront them and deal with their consequences. From Trump’s victory to the Brexit, current events have left most people scratching their heads and wondering what is happening. These unimaginable events also expressed themselves in Latin America, as it is slowly leaving behind over 10 years of populist governments. Argentina shifted from electing their first woman president to the first CEO president. Brazil’s first woman president who ran for the Worker’s Party, ostensibly in defense of the working class, was ousted by a right-wing institutional coup. The events that shaped 2016 were frankly unforeseeable and have drastically changed the political dynamics of the decade.

Many of us grew up learning about the socialist revolution through the experience of Cuba, Fidel and Che Guevara. Many of us in our younger days sported Che t-shirts and pointed to Cuba when people talked about the impossibility of revolution. We have grown past a wholehearted espousal of Fidel, understanding that the Cuban revolution and the bureaucratized state established afterwards is not the model of socialism we support. Although we defend the conquest of the Cuban Revolution, we also see the limits of the bureaucratized state created; power must be taken by the working class, organized in workers councils. A workers democracy must be established, a democracy that is much more real and alive than bourgeois democracy, where every four years we go elect our oppressors.

Despite all of this, the death of such an important icon is felt by millions around the world. Even though Castro’s health has been waning for years, many could not believe this day would ever come. We certainly didn’t think it would happen right after Trump’s victory, providing even more fuel to the right wing’s celebratory fire. Watching the counter-revolutionary gusanos of Miami celebrate Castro’s death in Little Havana, some holding up Trump signs is truly sickening.

The Presidents and Cuba

Despite all of his anti-establishment rhetoric, Trump’s statement about Castro’s death echoes what nearly all of the American media is saying. He declared, “While Cuba remains a totalitarian island, it is my hope that today marks a move away from the horrors endured for too long, and toward a future in which the wonderful Cuban people finally live in the freedom they so richly deserve.” Totalitarian, anti-democratic, dictatorial: all taglines for articles by the New York Times, Washington Post, CNN. Of course, this is same media that Trump spent so long berating for being biased. Once again we see that behind all the smoke and small skirmishes between Trump and the “establishment” they share the same strategic vision, an endless fight against the interests of the working class, and to subordinate the region to U.S. imperialism.

Obama had an ostensibly more rational response. His statement read: “At this time of Fidel Castro’s passing, we extend a hand of friendship to the Cuban people, We know that this moment fills Cubans – in Cuba and in the United States – with powerful emotions, recalling the countless ways in which Fidel Castro altered the course of individual lives, families, and of the Cuban nation. History will record and judge the enormous impact of this singular figure on the people and world around him.” He went on to say, “During my presidency, we have worked hard to put the past behind us, pursuing a future in which the relationship between our two countries is defined not by our differences but by the many things that we share as neighbors and friends — bonds of family, culture, commerce, and common humanity.”

Certainly, Obama’s statement is much different from Trump’s, and even different from the rest of the media. Nowhere does he call Castro a totalitarian dictator, and he acknowledges that Castro is a polarizing figure for Cubans, with many who love him and many who hate him. Beneath this veneer of unbiased conciliation is Obama’s soft imperialism– seeking to open Cuba to American corporations, but with a friendly smile.

Despite ostensibly different rhetoric between Trump and Obama, both seek the end of the advances brought forth of the Cuban revolution, whether by Obama’s soft imperialism or by Trump’s more incendiary rhetoric.

The Media and Castro’s Death

The media spent the whole day making sure that for anyone who didn’t know, Fidel should be remembered as a horrible dictator that led to economic ruin for Cuba. In this article we will not take up this discussion, as we do so here. For now, suffice it to say that the primary culprit for the economic struggles in Cuba is the United States and its embargo. Despite continual shortages caused by the country’s forced isolation, they were able to find the economic means for free, universal health care and education by expropriating the bourgeoisie and the nationalizing industry.

Of course, the media says very little about the astounding feats of a tiny island which faced off against the primary imperialist country in the world. Many editorials go further, arguing that the death of Fidel is the prelude of the death of the revolution—the death of an era of radicalism that rejected imperialism and capitalism, and saw in Cuba the hope for a successful revolution. In an article entitled, “Fidel Castro and dead utopianism” in the Washington Post, the author argues that “Socialism is bountiful only of slogans, and a Castro favorite was ‘socialism or death.’ The latter came to him decades after the former had made Cuba into a gray museum for a dead utopianism.” Others are quick to predict the demise of the Cuban Revolution. The Chicago Tribune says, “The ever-resilient Castro turned out to be mortal after all. His revolution survives him — but for how long?”

It has been proven time and time again that the media does not report the news, but rather manipulates the news to push forward a narrative that will strengthen the capitalist agenda of the 6 corporations that own 90% of the US media. What the Washington Post calls “utopianism” is the idea that there can be a classless society of equality and that there can be an alternative to this capitalist system of exploitation. The media is quick to point to Cuban poverty and say, “look, it doesn’t work!” It is quick to say that “Socialism is bountiful only of slogans” when the source of the scarcity is the US embargo which prevents Cuba from importing and exporting almost everything.

The Death of Capitalist Utopianism
The only utopianism that should be dead today is the utopianism that believes that capitalism can provide an egalitarian society. It is the belief that mankind can continue with the immense misery and environmental destruction that capitalism has wrought. More and more people, especially young people, are coming to this conclusion. From French students and workers who organized mass protests to the more than 1,000 schools occupied by Brazilian high school students, around the world, youth are rising up against the inequalities of the system. In the United States, the resistance to the Dakota Access Pipeline only grows, resistance to mass incarceration and police violence continues, and the mass revulsion at the election of the reactionary Trump demonstrates a polarization in US society. While many looked to Sanders as a possible solution to misery of capitalism, they were led back into the Democratic Party, the graveyard of social movements. Some former Sanders supporters have reached the conclusion that the Democratic Party is a trap. These activists are not utopian, they are realists.

Although an icon for socialist revolution has died, the desire for revolution lives on in a generation that must learn from both the problems of Castroism and the victories of the Cuban Revolution. Castro did not plan a socialist revolution and was forced by historical circumstances and international pressures to make the Cuban revolution into a socialist revolution. Castro aligned Cuba with bureaucratically-degenerated USSR, and upheld the Stalinist idea of socialism in only one country, discouraging revolutions in Latin America. Furthermore, we condemn the persecution of LGBT people and the conception that revolutionaries cannot be LGBT. We condemn the lifetime imprisonment of political dissidents and the ban on other leftist literature. We stand for freedom and for socialism, and because of that, we cannot entirely embrace Castro or mourn him without pointing out contradictions.

This new generation of realists, who see that capitalism cannot continue must be unabashedly socialist, embracing of LGBT people and of the combative legacy of Stonewall. This new generation of realists will remember and fight for the gains of the Cuban Revolution, with the certainty that revolution is possible. We will remember and celebrate the anti-imperialist spirit of Fidel Castro, the man the CIA could not kill. The imperialist determinism put forth by the Washington Post, Donald Trump and Barack Obama will clash against the will and organization of millions of women, workers and youth that are not going to allow their lives and their futures to be stripped away to enrich the bank account of the global elites.