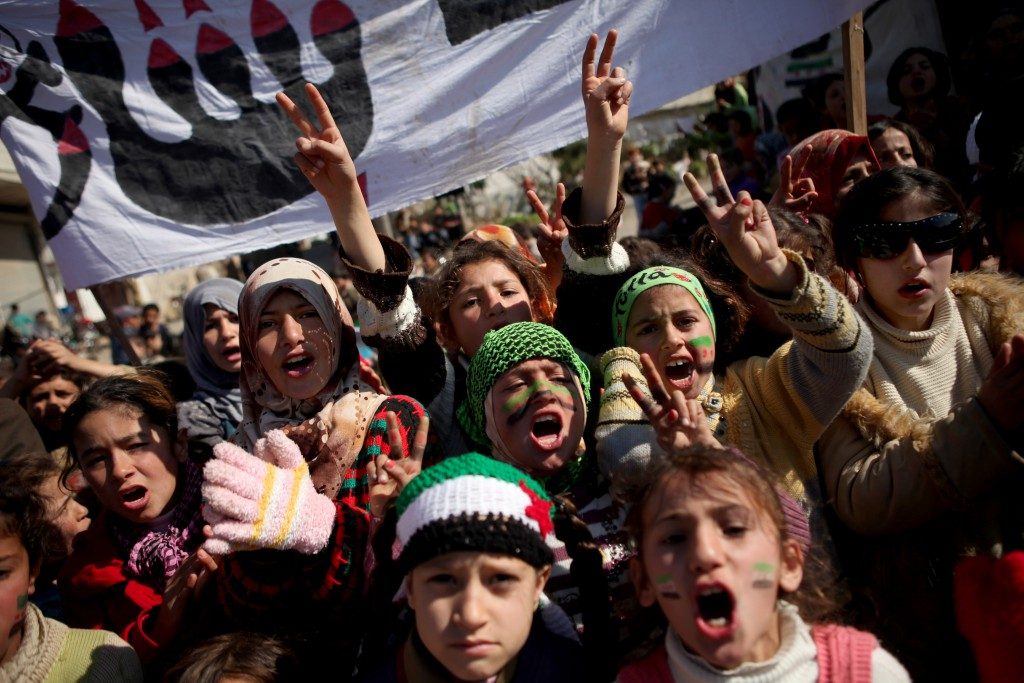 This is the second of a two-part retrospective on the Arab Spring, five years later. Read the first part here

Revolutionary Way Out of the “Arab Autumn”
The “Arab Spring” began as a spontaneous mobilization. With the participation of the workers’ movement, dictators were stripped of their power. However, with the civil war in Syria – and with massive imperialist assistance – it became the “Arab Autumn”. What are the prospects for the movement going forward?

In the first part of this article we described how the self-immolation of Mohamed Bouazizi led to a wave of uprisings in North Africa and the Middle East, in some cases with the active participation of workers. The dictators of Egypt and Tunisia were overthrown, but no actual alternative led by workers and the oppressed replaced them. When the mobilizations spread to Libya, they were violently suppressed as imperialism joined in the conflict through direct military action.

War in Syria
The trend towards militarization of the Arab Spring, which began in Libya, spread to other countries: Saudi Arabia helped its neighbor Bahrain to brutally crush its local protest movement. German imperialism, which officially still approved the democracy movement, recognized the urgency of the situation: in June 2011, the federal government planned to sell 200 Leopard battle tanks to Saudi Arabia, to “ensure stability” in the region. This militarization was also evident in Syria.

In March 2011, teenagers tagged a popular slogan from the demonstrations in Tunisia, Egypt and Libya onto the walls of a house: “The people want the fall of the regime.” The local police chief had them arrested and tortured. He reportedly told their outraged parents, “Go home and make new children.” Then came the first protests, an outrageous act in the secret police state of Syria. As in Libya, Syrian ruler Bashar al-Assad immediately responded with massacres. In the first month of his response, he let hundreds of people vanish in his torture chambers and confronted protesters with tanks.

Soon, the Free Syrian Army (FSA) formed, primarily by soldiers that had deserted the military. However, Assad was hard to defeat, protected by the complex system of privileges, dependencies and intimidation that he had built while in power. Also, the FSA had no program to offer that could satisfy the social needs of the population. Militarily inferior, they quickly offered their services to the warmongers in the US, Europe and the Gulf states. A surrogate war developed: Assad was supported by Russia, the Lebanese Hezbollah and Shiite Iran. In turn, FSA was supported by Syria’s biggest rival–Saudi Arabia–along with Qatar, Turkey and Western imperialist nations. It is not surprising that the FSA had no alternative to offer the people, given that their supporters had everything in mind except the interests of the Syrian people. Meanwhile, Islamist groups formed and, with financing from the Gulf, began offering that which the FSA was not willing or able to offer: the basic supplies of medicine and food.

Some Islamist militias, also armed by Saudi Arabia, began to break off from the FSA. Renegade officers of Assad’s regime and military personnel involved in the 2003 toppling of Saddam Hussein in Iraq saw an opportunity: with extreme radical Islamist slogans, they could depict themselves as the ones who would put an end to decades of destruction caused by imperialism. The Islamic State (IS), as it has called itself since mid-2014, arose from factions of these jihadist groups. Built upon looting, the displacement of ethnic minorities, ransom demands, financing from the Gulf, and the sale of oil, they generated an extremely lucrative war economy. This allowed them to pay their fighters much more than the FSA could, thereby attracting the rural poor, vagabonds and refugees who had lost everything in the war. Established in American torture chambers in Iraq, the IS in Syria also attacked all progressive movements and different ethnicities and faiths.

IS captured the attention of the US and European media by beheading a number of Western journalists. Currently, millions of people are fleeing the region and have crossed the borders of Europe. With the terror of Paris, the war in Syria has finally entered into the minds of Europeans. Imperialism’s response? More War! While the European states are courting the authoritarian regimes of Turkey and Saudi Arabia, the Kurdish People’s Protection Units YPG and YPJ are the only forces that have made any serious gains against the IS.

The battle of Kobanî in particular, at the end of 2014, was a turning point in the political situation in Syria: Kurdish militia fought heroically to prevent the advance of the IS. Around the world, millions of people took to the streets in a show of solidarity. For months, prominent newspapers reported on the fight. However, the Kurdish movement used the attention it received pragmatically, in order to participate in the “Alliance” lead by imperialism. This enabled the imperialist nations to present themselves as the “saviors” in the region. Now the enemies of the people are deciding the future of the region.

Judging from the post-war order in Iraq since 2003 and the unscrupulous acts of NATO allies in the region, we know that imperialist bombs might get rid of IS, but they will not put an end to the chaos and massacres in the region.

A Socialist Solution
Five years after the start of the Arab Spring, the question is how to break the cycle of authoritarianism and bloody civil war. Imperialism, for one, has no options to offer. After more than a century of plundering the region, with its recent wars in Afghanistan, Iraq, Libya and Syria, it has only created the conditions for reactionary movements like IS to develop. Its bombs against the IS will not help the Kurdish movement, once the Kurds break away from imperialism. The US, France, Great Britain, etc. simply act on opportunities to improve their own positions of power in the region. This kind of motivation is incompatible with a promise to the people of North Africa and the Middle East of a decent future.

The fight against the IS and for democratic freedoms can only be won with a social program. That program must include demands like the distribution of land to farmers, the nationalization of oil wells under workers’ control, job opportunities for all and reduction of working hours for the same pay, control over weapons for workers and farmers, democratic rights for ethnic and religious minorities, political participation of women, equality of working and education conditions, and the departure of imperialist powers from the region. However, these demands can only be met by a revolutionary party of the working class through the struggle for power, by destroying the bourgeois state and establishing democratic organs led by workers and the oppressed. That is the strategic lesson learned from the failure of the Arab Spring.

The Arab Spring has demonstrated how incredibly fast regimes that existed for decades can fall. It undermines those who apologetically say that revolutions belong to the past. It turns out that the masses, deeply intimidated and frightened by their dictators, were able to develop enormous self-confidence and tremendous power in a very short time. The triumphs of the Arab Spring even touched Europe, when there were occupations of public places and mass protests in Greece and in the Spanish State. But the Arab Spring has suffered heavy defeats. The main reason for this was that no revolutionary party intervened around the question of the abolition of private property. As a consequence, the working class succumbed to bourgeois leadership, even in the countries where the workers’ movement was strong (Tunisia and Egypt).

The strikes and mass demonstrations had already begun to deconstruct the bourgeois states. But the conciliatory policy of the trade union bureaucracies and the intervention of imperialist powers, in collaboration with reactionary forces, interrupted this process. To prevent this and to develop autonomous decision-making structures out of the strikes and mass mobilizations, a revolutionary workers’ party would have been necessary. Unfortunately, the trade union bureaucracy strangled the grassroots approaches, acting in its own interest. This happened throughout the Arab region. The result was that the workers’ movement could not lead the uprising politically, even though the workers had instigated the mass movement themselves.

And so the social issues remained ignored. Companies stayed under the control of the national bourgeoisie and of imperialist investors. However, the national bourgeoisies have proven that they cannot be trusted: while making some very reluctant concessions, such as women’s suffrage in Saudi Arabia, they simultaneously support extremely reactionary influences, such as the jihadists inside Syria. Their personal enrichment is threatened by democratization; they would rather demonstrate their allegiance to imperialism. Therefore, democratic freedoms can only be won through social gains.

The Arab Spring took a bloody turn and became the Arab Fall. The situation is devastating, especially in Syria, Iraq, Libya and Yemen – countries where pure chaos and brute force prevail. However, the power of the movement that began with the self-immolation of Mohamed Bouazizi five years ago has not been quashed. The Kurdish movement has the potential to achieve great victories against the Turkish President Erdoğan and the IS, in alliance with the Turkish working class. This would require the socialization of enterprises, which means a break with its own bourgeoisie and imperialism. The same goes for Egypt and Tunisia. Although the working class did not manage to change the system, its ability to act was not completely destroyed by state repression and reactionary forces as in Syria. If it succeeds to break from its own bourgeoisie and reformist leaders, and lead the way of the socialist revolution with its own revolutionary party, it could have a tremendous impact far beyond national borders.