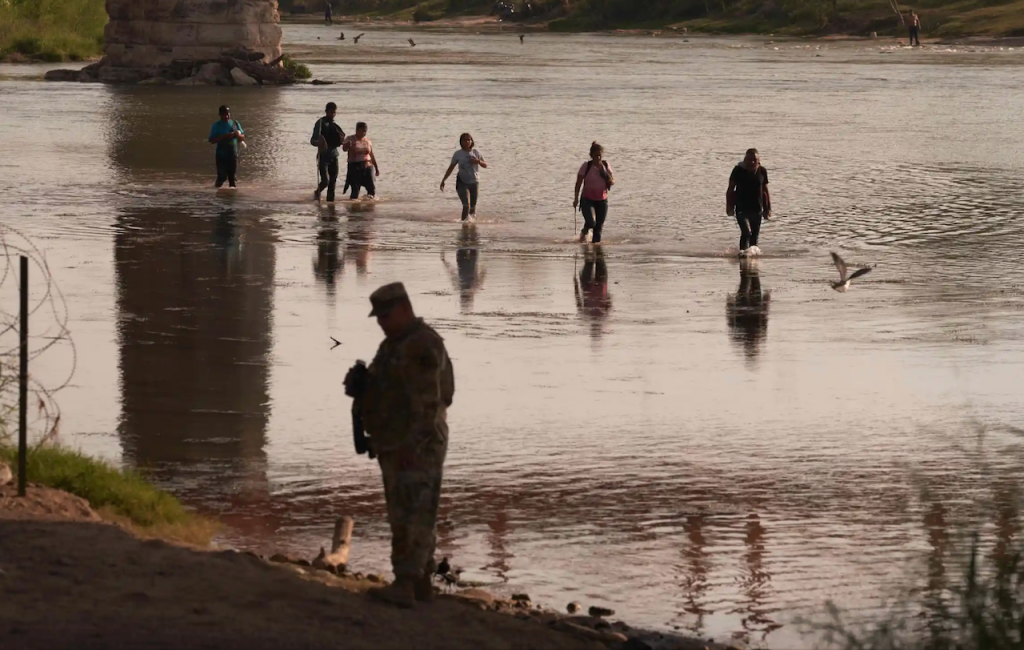 Despite what some people might believe, ousting Trump from the presidency has not stopped politicians from scapegoating immigrants. In fact, with midterms approaching, Republicans are getting more extreme in their attacks — particularly Texas Governor Greg Abott and Florida Governor Ron DeSantis. These governors whipped up a crisis by bussing and flying migrants to places such as New York City, D.C., and Martha’s Vineyard, challenging the Democratic Party’s supposed welcoming attitude towards immigrants.

Republicans are stoking fear with claims that fentanyl is flowing into the United States as a result of Biden’s “open borders.” In Arizona, the Republican candidate for Governor, Kari Lake, used this to promise that if elected, she will “issue a ‘Declaration of Invasion’ at our border.” History has already shown what type of violence this can cause, both domestically and abroad: the War on Drugs has destroyed countless lives by terrorizing primarily Black communities in the United States and served as a basis for imperialist intervention in Latin America.

The Far Right’s promises to further wage war at the border is not just here in the form of campaign statements. Along with their bussing tactic, Abbott and DeSantis preside over states where the U.S. military and border patrol agents ruthlessly keep migrants from entering the United States. In Florida, this comes in the form of U.S. troops training border patrols to intercept refugees from the Caribbean. In Texas, Abbott has allowed private interests to deploy the National Guard to police the border. The operation drew scrutiny for how it enables Far-Right capitalists to freelance the National Guard to act outside of its regular duties.

The Democrats Are Moving Right, Too

While the Republicans may have a particularly violent and nationalist program towards immigrants, the Biden administration has also worked hard to keep immigrants out. Despite the GOP’s claims that it needs to escalate its war on migrants because Biden is too lax on immigration, this administration represents a shift to the right on immigration policy compared to the Obama administration.

Almost immediately into his presidency, Biden rebranded Trump’s kids in cages as “migrant overflow facilities.” The administration sent Vice President Kamala Harris to Guatemala to tell refugees “Don’t come,” deported more Haitians in one year than Trump did in his entire presidency, and expanded Trump’s “Remain in Mexico” policy. For all Trump’s promises to build a massive border wall to keep immigrants out -– and all the Democrats’ supposed disapproval of the idea -– Biden is now completing its construction.

Additionally, the entire Democratic Party not only militarizes the resources to keep refugees out, but maintains the imperialist policies which create and increase conditions of forced migration. As just one example of this dynamic, one of the largest groups of migrants coming to the United States now are Venezualans fleeing the economic crisis which has been largely worsened by Trump’s maximum-pressure sanctions designed to starve the country. Biden has maintained these sanctions.

Why are both parties so intent on maintaining anti-immigrant policies? As immigrant rights organizer and borders scholar Harsha Walia explained recently:

Capitalism requires labor to be constantly segmented and differentiated — whether across race, gender, ability, caste, citizenship, etc. — and the border acts as a spatial fix for capitalism. Borders are not intended to exclude all people or to deport all people, but to create conditions of deportability, which in turn increases social and labor precarity. Workers’ labor power is captured by the border and this cheapened labor is exploited by the employer.

In other words, maintaining borders and denying full rights for immigrants is too valuable to U.S. capital. For this reason, a party of capital like the Democrats will never truly fight in defense of immigrants and their right to migrate. To the extent that fighting for immigrants is in the Democratic Party’s interests, it is so they can rally their base with support from immigrant rights NGOs. Just like we see them doing now with abortion rights, their pro-immigrant rhetoric is a cynical ploy to get out the vote.

In fact, maintaining the border regime is becoming more of a priority for capital as more frequent and larger refugee crises risk regional instability. As the climate crisis, the developing inflation crisis, and imperialist intervention and economic warfare on Latin America create ever more refugees, the Republicans and the Democrats are being forced to shift their policies on immigration to the right.

However, just because the Far Right is emboldened and we can’t count on the Democrats to fight for immigrants doesn’t mean we give up or resort to lesser evilism. Rather, it makes it all the more necessary for us to fight in defense of immigrants with working-class methods, independent of the parties of capital. This is not just a moral fight, but a material one with implications even for workers born in the United States.

The border regime which both the Democrats and Republicans use to violently keep immigrants out is the same state violence that attacks and murders Black workers constantly, that enforces laws against the bodily autonomy of women and queer workers, and uses legal measures and (if necessary) force to keep organized workers from striking. Fighting the worst forms of state violence and greatest forms of workplace precarity and exploitation -– both of which immigrants face -– only stands to benefit workers who are fighting for their rights and livelihoods at a time of rising costs of living and an empowered Far Right.

Along with building a stronger fight against state violence, fighting for immigrants is essential if the United States is going to build a successful labor movement. As noted above, the separation of workers across borders and hyper exploitation of immigrant labor makes it easier for capital to replace organized labor with more precarious immigrant workers. A fighting labor movement will only be so strong as long as capital has a reserve army of labor which it can use to replace organized workers with workers who have less rights and protections, such as undocumented workers, temporary immigrant workers, or workers in countries subjugated by U.S. multinationals.

Generation U is well positioned to put forward this perspective. This dynamic labor phenomenon is led by workers who were shaped by Black Lives Matter and champion social justice unionism. It is essential that this movement take up the fight for immigrant rights and class struggle across borders. This will not happen through the Democratic Party which is led by Biden’s talk of supporting American jobs, or, at best, Bernie Sanders’s talk about the labor movement as a way to “transform the country.”

In contrast to the Democratic Party which accepts and supports a bordered perspective on labor, the working class needs a party which puts forward an internationalist perspective with demands for open borders, a universal right to migrate, abolition of ICE, and full rights for all workers regardless of immigration status or country of origin. Immigrant rights can only be won by a party of the working class with an unflinching commitment to internationalism and a program which understands border regimes and denial of immigrant rights as an inexcusable attack on our power and dignity as workers.