The Fascistic Turn in the World’s Largest Democracy: Part I

The rampant growth of right wing forces in India has been caused by the crisis of neoliberalism. The first article of this two part series looks at the conditions that led to the rise of the right. 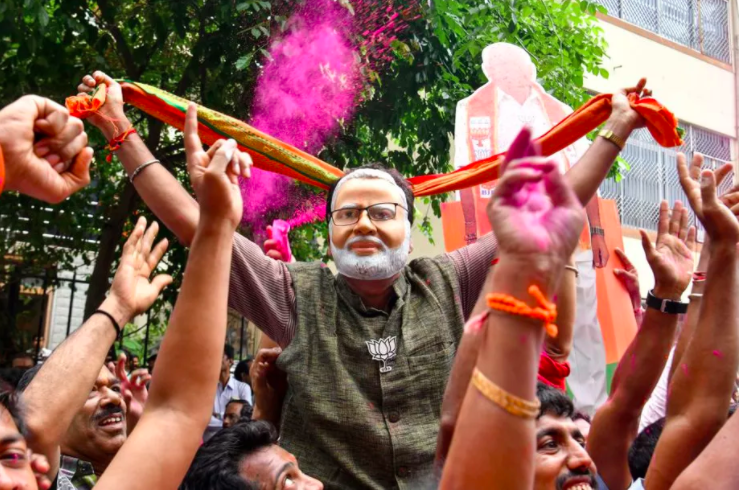 India’s turn to the right, like elsewhere in the world, has been caused by the crisis of bourgeois economics and politics. The continuing crisis of capitalism in the neoliberal era is producing widespread economic deprivation, alienation, unemployment, wage-stagnation, and distress of rural petty producers.

This economic and political situation, combined with the lack of an alternative vision, allowed the Bharatiya Janata Party (BJP) to deploy a Hindu-nationalist ideological narrative and a cult of personality around their leader, Narendra Modi, to mobilize mass support, particularly Hindu support.

In 2019, the BJP received an overwhelming mandate in the Lok Sabha Elections. It bagged 303 seats on its own, out of a maximum total of 542 seats, and established itself as Indian capitalists’ most favored party. The Indian National Congress Party, which had ruled India for 55 of the last 72 years of independence, only won 52 seats. Meanwhile, the Left Front was decimated electorally, winning only 5 seats across the nation. Of these five seats, India’s largest communist party, the Communist Party of India—Marxist [or CPI(M)] won just three.

A pro-business and Hindu-nationalist party, the BJP is affiliated with the International Democrat Union, a global alliance of right wing parties that includes the British Conservatives. The BJP campaigned in the last two elections under the leadership of one person, Narendra Modi. Modi appeared on the scene in a post-9/11 world that was in the grip of violent Islamophobia. Modi’s hardline communalism fitted neatly with this global mood. In 2002, at least 1,000 Muslim citizens were butchered by Hindu mobs in the state of Gujarat, where Modi ran the government. Many, including from his own administration, believe that Modi deliberately allowed the slaughter. Not only were Muslims left unprotected, but after the riots, proper relief facilities were not made available for those affected. Referring to Muslim women affected by the anti-Muslim riots, Modi said: “Should we run relief camps, open child-producing centres?” In fact, an undercover journalist covering the riots once said, “I met some of the top bureaucrats, officials who worked under Mr. Modi in 2002. They confessed his complicity in the Gujarat riots; one bragged to me that Mr. Modi let the violence worsen, so it would help him in his re-election” (Ayyub, 2019).

Modi inherited his communalism from the RSS (Rashtriya Swayamsevak Sangh or National Voluntary Corps), which he joined as a boy and later worked full time for. Established in 1925 (the same year the CPI came into being), the RSS — whose political arm is the BJP — is a fascist organisation that draws inspiration from Nazism (see Ahmad, 2015-172-174). In its early years, when the country was in the midst of fierce anticolonial struggle, the RSS considered Muslims a greater enemy than the British colonial government and played little role in India’s freedom movement. As a committed RSS man, Modi believes in the idea of turning India into a theocratic Hindu state, a part of the fascistic project. To be clear, as Harman (2004) says, “the word “fascism” is often used in a very loose way.” While India hasn’t become fascist yet, there are fascistic tendencies that are growing stronger, thanks to BJP/RSS forces.

Furthermore, as the Chief Minister of Gujarat, Modi openly promoted the worst forms of neoliberal capitalism. Under the guise of development, he unfurled a process that oversaw the transfer of public resources (e.g., land and loans from state-owned banks) to big businesses and the suppression of workers’ democratic rights. Modi has lived by two mottos: “Government has no business being in business” and “Minimum government and maximum governance.” He has wanted to deploy at the national scale his Gujarat model – a combination of callous communalism and cruel capitalism in its naked neoliberal avatar. Some see two different Modis in him: a communal-fascistic Modi and a business-friendly Modi. For example, noted writer Arundhati Roy once said this about Modi: “From being this openly sort of communal hatred-spewing saccharine person, he then put on the suit of a corporate man, and, you know, is now trying to play the role of the statesmen, which he’s not managing to do really” (quoted in : Smith, 2014). In reality, these are only two sides of the same coin, painted with a false image of statesmanship.

The 2014-2019 BJP-led government was one of the worst governments in the 70 years of post-colonial India. Apart from the economic slowdown, there was a 45-year high unemployment rate, wage-stagnation, rise in economic inequality, and an unprecedented rural crisis, with farmers crushed by debt and coercive dispossession resulting in an increasing number of suicides. In addition, there was also an attack on democratic rights of common people. Yet, the government got re-elected. Why and how?

During this period, there were massive farmers’ protests. Millions of workers joined nationwide strikes organized by Left parties, including one on January 8-9, 2019 in which 150-200 million workers participated, making it the largest strike in the world at the time. Yet, workers’ anger at the level of trade union action was not politically expressed as a vote against the BJP. In fact, many voters who support the Left voted for the BJP in some regions.

Between the economic crisis and crisis of profitability, the business class had been looking forward to pro-investor reforms to increase their profits. They funded the BJP’s election. The BJP’s electoral machine also made full use of state’s coercive and ideological institutions and non-state entities (eg. RSS), a process that contributes to the gradual and uneven emergence of a fascistic state.

With the crisis of profitability, and when (finance) capital can move quickly in and out of a country, the capitalist state seeks to spend less time on democratic procedures and  accelerate the decision-making process. Decisions favouring capitalists must be taken quicker and without opposition, including opposition from below. This creates the conditions for the emergence of a politics of personality, which has produced a de facto presidential system, and which has contributed to BJP’s victory in line with the corporate agenda. The politics of personality is an aspect of Bonapartism, allowing a person (e.g., Modi) and the people devoted to that person to make pro-business decisions quickly partly by controlling all parts of the state, including the press, and by corporatism. It is worth recalling some of Trotsky’s (1934) points here. He says: “between parliamentary democracy and the fascist regime a series of transitional forms” emerge, one of which is Bonapartism, which “represent … the government of the strongest and firmest part of the exploiters.” He adds: “present-day Bonapartism can be nothing else than the government of finance capital which directs, inspires, and corrupts the summits of the bureaucracy, the police, the officers’ caste, and the press.”

The BJP/RSS agenda and the re-election of the BJP government make it clear that the objective effect of all of this is to draw political attention away from the business class. Their aim is to have the objective effect of dividing the people on the basis of religion and uniting Hindu toilers with Hindu exploiters over Hindu nationalism. The fascistic duo thus benefits the capitalist class. When those in RSS and BJP, including Modi, talk about the task of lifting the Hindus from centuries of slavery under Muslim and British rule, not a word is uttered by them about the fact that the nation of peasants, workers and oppressed minorities is slave to 1 percent of the population right now.

Just as capitalism has hidden behind such things as neoliberalism and even crony capitalism, fascistic tendencies have been hiding behind the veil of vile bourgeois politics and bourgeois social service. The BJP’s re-election is helped by, and feeds into, the mistaken communalist belief that people’s problems are caused by differences between religions and not by fundamental social processes such as capitalism and interventions of the capitalist state.

The Role of the Left and the  “Bourgeois-Centrists”

It is wrong, however, to blame only the BJP for India’s turn to the right. The failure to protect democratic rights, including the rights of religious and other minorities, characterizes the bourgeois system as a whole.

It is the conjunctural combination of a) comprehensive communalisation of the whole bourgeois political system, in a context of economic crisis and b) the absence of a principled left opposition bloc to defend the economic and political rights of the working classes, which has been the condition for the massive mandate that the BJP has received in the summer of 2019.

Modi, like his party, is authoritarian. But there is a long history of authoritarianism and militarism in India before the electoral rise of the BJP. The history of curtailing democratic rights, including of workers against their employers or of peasants against landlords in India, is a long one. People’s resistance against the system has been crushed since independence, often with extreme violence. It cannot be forgotten that in June 1975, Indira Gandhi imposed the Emergency, which suspended India’s constitution and lasted 19 months. Consider the 1974 railway strike involving almost 2 million workers, which was defeated by the Congress government on the grounds that it was “politically motivated” (Frankel, 2005:528-530).  The entire political system has been failing to protect democratic rights as well as meet people’s economic needs.

The Indian state (i.e., the entire bourgeois political system) has systematically failed to punish those responsible for inciting communal atrocities against minorities during the Congress and BJP regimes.

When in power, non-BJP parties (including the Left in Bengal) have done little to improve the economic conditions of Muslims, even though they were generally better protected against communal violence. These parties have not done much for Muslims’ political representation either; Muslims constitute 14 percent of the country’s population, but their representation in government remains abysmally low at 4.7 percent, and the highest percentage since 1950 has been less than 9.5 percent. Their weak sense of secularism has additionally given the blatantly communal BJP a chance to undermine the legitimacy of those parties that claim the secular mantle.

BJP’s success was rooted in capitalist crisis and in the objective need to respond to the potential and actual threat of the masses, and its success is well within the limits of  bourgeois, politics reflecting bourgeois economy and class relations.