The Fight for Abortion Under Puerto Rico’s Colonial Regime

Decisions over reproductive, LGBTQ+, and other human rights are under attack by the fundamentalist right wing in Puerto Rico. On top of that, the Fiscal Control Board increases austerity measures in health services, deepening inequity and the inaccessibility of essential rights and services. 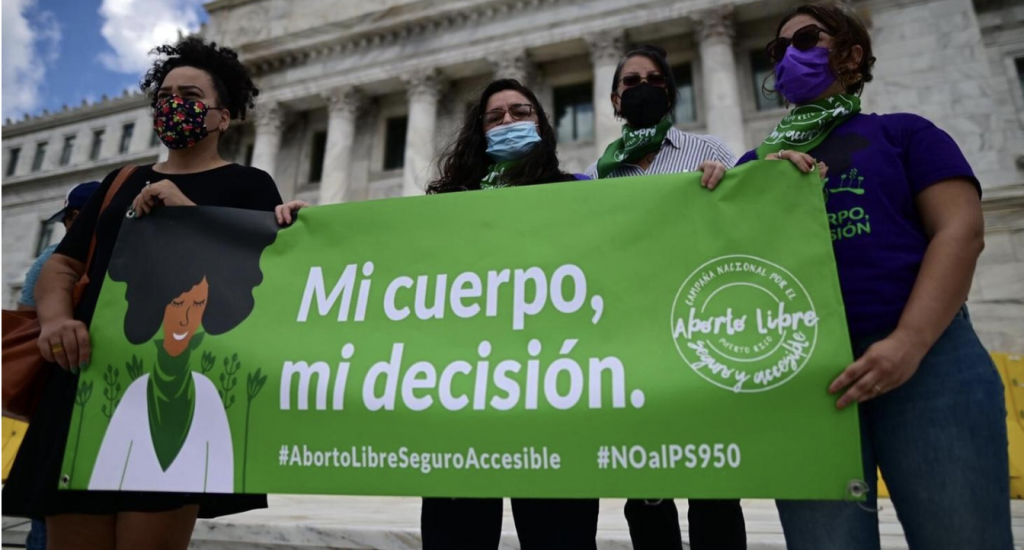 As the Right advances in the United States to overturn Roe v. Wade, Puerto Rico, a colony of the U.S. since 1898, is waging an intense battle to preserve its right to abortion. At least eight draft bills to limit abortion on the island have been presented. Senate Bill 693 (PS 693), proposed by the right-wing legislator Joanne Rodriguez Veve, seeks to limit abortion starting at week 22 of gestation, supposedly based on “fetal viability”. Rodriguez Veve and sponsoring legislators attempted to introduce the bill to the Senate without public hearings. But after widespread resistance from feminist organizations, lawyers, and the medical community, the bill was returned to the legislative assembly for public hearings. It was approved recently in the Senate and is advancing in the legislative process to create the Law for the Protection of the Conceived in Its Viability Stage (Ley para la Protección del Concebido en Su Etapa Gestacional de Viabilidad).

The truth is that there is no scientific or medical basis to define fetal viability and that the bill helps create an artificial public health crisis. In one of the most recent amendments, the bill stipulates that in the case of rape or incest, if the victim does not want to carry the pregnancy to term after 22 weeks and does not meet certain medical criteria, the physician cannot provide an abortion. Instead, the physician must induce premature labor and so that the baby can be put up for adoption. A large portion of these forced births will not be able to survive.

And it’s clear that these limits to abortion rights would have an impact on many sectors already vulnerable to gender violence, such as women, and trans and LGBTQ+ people.

Not to mention that this bill would put at risk pregnant people who seek an abortion after week 22, since it narrows down the options for medical personnel to manage their health concerns after this stage. A doctor could provide an abortion only in a medical emergency, defined as a situation in which the pregnant person faces death or is about to suffer a substantial and irreversible impairment of a primary bodily function. This is a setback from previous abortion legislation in Puerto Rico (Pueblo v. Duarte, 1980) that expanded the definition of health to include both physical and mental aspects.

The PS 693 bill’s sponsors also cite 16 U.S. states that have legislated to “protect the life of the conceived” as a model for their legislation.

Decisions over reproductive rights in Puerto Rico have been shaped by its colonial relationship to the U.S. In 1937 abortion became legal in Puerto Rico, following U.S. eugenic policies and the introduction of Malthusian clinics to manage procreation rates in the island. It should be noted that as part of these policies, a mass sterilization campaign was introduced, without fully explaining the implications of the surgical procedure to women. Puerto Rico had the highest sterilization rate in the world, with 1/3 of women undergoing forced sterilizations by 1965.

At the time abortion became legal in Puerto Rico, a qualified physician could determine the need for an abortion with the purpose of preserving the pregnant person’s health. Abortion policies were more liberal compared to those of the U.S., which popularized the “San Juan weekend,” in which wealthy women from the mainland U.S. would travel to PR to get an abortion. After the 1973 Roe v. Wade decision, the regulation of abortion in PR was amplified by the decision’s trimester framework and its recognition of the constitutional right to privacy. This right, however, is not absolute, since the state can intervene when the fetus can likely survive outside the womb.

Some law experts agree that overturning Roe v. Wade will not immediately impact Puerto Rico’s right to abortion. Puerto Rico’s Constitution explicitly protects the right to intimacy, linked to individual autonomy and the right to make decisions without the undue intervention of the state, which is more ample than what is stipulated in Roe v. Wade and even in the U.S. Constitution. Pueblo v. Duarte interpreted that, based on the constitutional intimacy right, a pregnant person can have an abortion. To change abortion rights, Pueblo v. Duarte has to be overturned and new legislation approved, like the PS 693.

On the other hand, feminist lawyers recognize that overturning Roe v. Wade could lead to the fundamentalist Right to mobilize and attack abortion rights. Abortion providers are already feeling the onslaught of these attacks and have gone out of their way to guarantee this right for their patients — to the point of hiring armed guards to protect abortion clinics and wearing bulletproof vests during work hours. Puerto Rico has a more flexible abortion policy than the states, which will bring patients from elsewhere in the U.S. to the island’s already strained healthcare system. Grassroots organizations, like Taller Salud and the Campaña Nacional por el Aborto Libre, Seguro y Accesible (National Campaign for Free, Safe and Accessible Abortion), among others, took the streets on May 28 and have called for a mass mobilization to stop PS 693 and to fight back as part of the Green Wave (Marea Verde).

The Green Wave is a Latin American movement that emerged in Argentina to defend the right to legal, safe, and free abortion. The green bandanna has become a transnational symbol of feminist activism. Abortion is legal in Argentina since December of 2020. The Green Wave mass movement has also achieved the decriminalization of abortion in Colombia and Mexico. These are examples of how abortion rights are advancing in Latin America and the Caribbean when people unite and mobilize. “Somos más y no tenemos miedo” (There are many more of us, and we are not afraid), a phrase popularized during the summer of 2019 mass protests in Puerto Rico that led the governor to resign, should continue to inspire the fight to protect every human right.

Threats to LGBTQ+ and Women’s Rights

Attacks on abortion and other human rights are also part of the religious fundamentalist sector agenda. This sector includes the Proyecto Dignidad (Dignity Project) party, which is based on a Christian democracy platform. Rodriguez Veve, principal author of the PS 693, is a member. Legislators from this party have been accused of using false information to confuse and promote legislation that perpetuates discrimination and hatred, particularly against the LGBTQ+ community. In May 2021, the Commission ​​on Community Initiatives, Mental Health and Addiction failed to accept a bill that would prevent mental health professionals from practicing conversion therapy. Puerto Rico has the highest transfeminicide rate among all U.S. jurisdictions. Meanwhile, transphobic bills introduced by fundamentalist legislators seek to ban trans athletes in female sports and to ban hormonal treatment and surgeries for trans kids.

The fundamentalist sector also opposes school curricula with a gender perspective, which can contribute to the reduction of gender-based violence. Parents, they argue, have the fundamental right to educate their children. Yet gender-based violence runs rampant. On average, there is one femicide per week on the island. For years, feminist organizations and other sectors have denounced the increasing gender violence issue in the island. After much public pressure, the governor declared a state of emergency due to gender violence in 2021, which included integrating a gender perspective curriculum in public schools. The secretary of education started working on this curriculum along with the Committee for the Prevention, Support, Rescue and Education of Gender Violence (Comité de Prevención, Apoyo, Rescate y Educación de la Violencia de Género; PARE). In nonpublic agreements discussed with Rodriguez Veve, the secretary of education presented a diluted curriculum that erased the concepts of gender perspective and identities and agreed to use the concepts of “men” and “women” in strictly biological terms. The curriculum will be called instead Equity and Respect among Human Beings (Equidad y Respeto entre los Seres Humanos), erasing the issue of gender violence.

The Limits of a Colonial Healthcare System

As if all this were not enough, Puerto Rico’s finances are subjugated to the Fiscal Control Board (FCB), instated by Democratic president Obama’s PROMESA law in 2016. In an already fragile healthcare system, the FCB is imposing austerity measures to favor the payment of what many argue is an unconstitutional debt, increasing the profit of Wall Street investors. There is a shortage of medical personnel to serve the population, increasing exploitation and burnout among the medical community. Doctors on the island face many pitfalls with health insurance companies. Many have said insurance companies often deny the most effective treatments for patients due to cost. In other cases, insurance companies cancel the contracts of providers without justification, arguing that the “provider network is already full.” Specialty physicians typically opt for emigrating to the U.S., in search of higher salaries and better quality of life. There are laws guaranteeing full compensation for physicians, the respect of medical criteria over insurance companies’ profits, and the banning of unjustified cancellation of contracts between the provider and the insurance company, but the FCB nullified them, arguing that they were economically incompatible with the current certified fiscal plan. Puerto Rico and other U.S. territories do not enjoy the same privileges and basic rights as the mainland. Earlier this year, the Supreme Court upheld a law that denies disability benefits to residents of Puerto Rico. SSI disability benefits financially help disabled and elderly people, but it is not available in every U.S. territory. Medicaid also operates differently in the territories, where the federal government capped contributions to 55 percent (leaving 45 percent to be paid by the local government), while in other states it can go much higher, depending on per capita income. These economic limits in the healthcare system will disproportionately impact low-income workers and other marginalized groups, as the geriatric population grows and younger adults decide to flee the island in search of better opportunities. Austerity measures imposed by colonial and capitalist interests should not interfere with essential services. The only way forward is to reclaim Puerto Rico’s sovereignty, abolish the Fiscal Control Board, and develop a public healthcare system that meet the needs of the people, including the right to a free, safe, legal, and accessible abortion.