Fighting for Socialism Under a Biden Administration: Join Us for Post Election Discussion

The elections are over and Biden is President-elect. So where do socialists go from here? Left Voice is hosting a post-election discussion on Saturday November 14, from 3 pm ET | 12 pm PT! Join us! 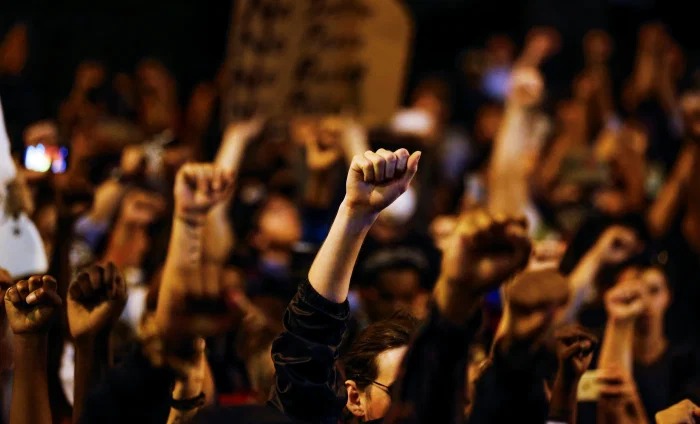 Join us for our post-election discussion. Sign up here.

The 2020 elections are over and Joe Biden is now the President-elect. While we are certainly glad that Donald Trump has lost, we also have no illusions about a Joe Biden presidency.

Joe Biden is one of the architects of the neoliberal order that led to the rise of Donald Trump and Trumpism. Over his  four decades in D.C., he’s built his record as a racist, imperialist war hawk. He wrote the 1994 crime bill and was a champion of the war on drugs, both of which disproportionately targeted and locked up Black and Brown people. Internationally, he supported both the Iraq and Afghanistan wars and was Vice-President in an administration that droned and decimated the Middle East. He was a vocal supporter of NAFTA, supported and implemented corporate bail-outs while working people lost their jobs and homes, and continues to oppose Medicare for All in the midst of a global pandemic that has killed over 200,000 people in the U.S. alone.

This is no lesser evil for the working class and the oppressed, both in the U.S.  and across the world. There is only evil with a more respectable face — that of Joe Biden and Kamala Harris.

While Donald Trump continues to throw tantrums and challenges the veracity of the results, Biden has been putting together a transition team that lives up to the promise he made earlier this year to his capitalist donors —- “nothing will fundamentally change.”

Post-election, Democrats wasted no time punching left, blaming the growing progressive wing and their popular demands for their failure — the very wing that revitalized the party and played a major role in this victory. Instead, as we’ve seen through the election cycle, the Democrats have continued with their empty rhetoric, weaponizing liberal identity politics while offering little in lieu of material relief. The Democratic party is no friend to the working class and oppressed.

Our hope lies not in these token representatives, but in our collective strength as a class. And as we’ve seen across the world over the last few years, when we fight together, we win. From Puerto Rico to Lebanon to Indonesia, millions have been taking to the streets to fight against the neoliberal order, threatening to tear it down. In Chile, protests against a rise in subway fare escalated into a movement that resulted in the rejection of the Pinochet constitution and the popular support to write a new one.

Closer to home, this summer saw the explosion of an anti-racist uprising that reverberated across the world. Thousands took to the streets in cities and towns across the U.S., not only demanding justice for the victims  of racist police brutality, but also questioning the very institution of policing. The burning of a Minneapolis PD police precinct had a higher approval rating than either of the two presidential candidates. These mobilizations happened after a wave of frontline healthcare workers fought for better conditions and PPE for themselves and their patients. Since then, teachers across the country have called sickouts and raised their voices against unsafe school openings that threaten their lives as well as their students and their families.

Time and again, we’ve proven that we don’t need bosses. We can’t rely on capitalists and their representatives to do right by us when all they’ve given us are crumbs. As the people who literally make everything run, we have a world to win.

Like Donald Trump and presidents before him, Joe Biden is not our friend. We’ve fought hard against the current oppressor-in-chief and it’s time we continue the fight as the next one takes office. Breaking the capitalist duopoly is daunting and isn’t easy, but that work has to start now. We can’t put it off for the future or resign ourselves to how things currently are. We are the generations that have now lived through multiple economic crises and have inherited a dying world. But we are also the generation that have shown our strength and determination in fighting for more. And we have to fight for more. To continue this fight, it is imperative that we draw lessons from these elections and organize ourselves for the coming period.

It is in this spirit that we at Left Voice invite you for a discussion this Saturday, November 14, from 3 pm ET | 12 pm PT.