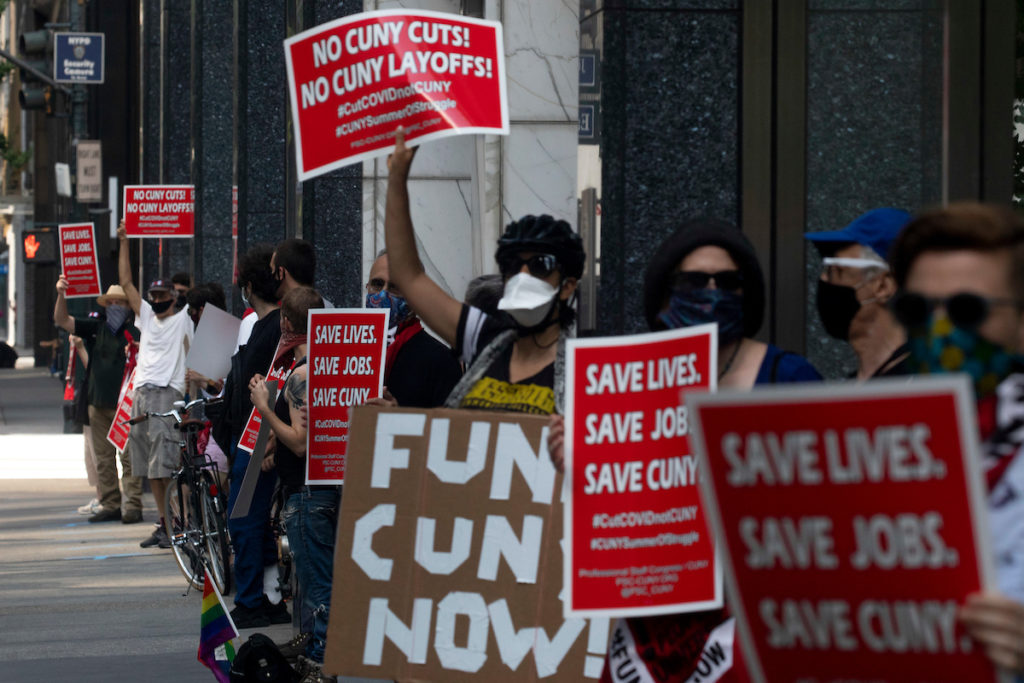 Last month, the Delegate Assembly (DA) of the Professional Staff Congress (PSC) — the union that represents more than 25,000 faculty and staff at the City University of New York (CUNY) — approved a “Strike Readiness” resolution. The resolution, which passed overwhelmingly, is a watered-down version of an earlier one brought to the DA by a coalition of rank and file activists, many of whom have been working for years to build a more militant union. The earlier resolution, which was narrowly defeated in the DA the week before, called for an immediate campaign to build for a strike authorization vote. That proposal, which I voted in favor of, failed in large part because most members of the union leadership were opposed to any resolution with actual commitments, such as a campaign to build toward member authorization of a strike. Instead the leadership preferred the language of being “strike ready” (which could mean almost anything really) and the new resolution reflects that more cautious bureaucratic mindset.

Despite this, the new resolution is still an important step in an unfolding process (one that has been going on for years) of moving the PSC closer to an eventual strike or other work action that could directly challenge the New York State Taylor Law which prohibits strikes by public sector employees. While it is clear that the leadership of the union has no real intentions of moving forward with a strike campaign any time soon, as the fine print of the resolution commits the union to many of the same tired lobbying tactics it has pursued for years, it nonetheless has opened up space for rank and file activists to do that work themselves. Indeed, the resolution was in large part the product of a series of well-attended and self-organized strike authorization vote committees that were created by rank and file members through struggles in their local chapters. Since the resolution, these committees are continuing to grow and are leading discussions on the implications of the resolution and how to prepare for an eventual strike.

This resolution of course, comes in the midst of a series of interlocking and ongoing crises for the university. The coronavirus pandemic and the economic crisis that followed have hit working people hard, especially poorer workers and workers of color. More than 300,000 Americans have died from the coronavirus, including at least 38 faculty and staff, (many of them PSC members), and CUNY students and their families. Tens of millions of working people have lost their jobs, and many of those job losses are likely to be permanent. Although vaccinations started this week, we are currently still witnessing record-breaking numbers of new cases and deaths, and it will be many more months before enough people are vaccinated for the economy to safely reopen. Meanwhile, a second long recession or another depression seems very likely.

While this crisis is affecting almost every working person in the country, it has hit CUNY especially hard, in large part because CUNY was already in crisis even before the pandemic hit. For decades CUNY has faced a series of ruthless austerity budgets that have left little room for further cuts. Even before the pandemic, wages were stagnating with relation to inflation, tuition and fees were continuing to increase year after year, and the vast majority of the faculty had been transformed into hyper-exploited part-time workers with little to no job security and few benefits. Since then, things have only gotten worse. While we managed to avoid the worst of the health crisis, economically, the university, the students, and the people that make the university run have been devastated. Course caps have been increased in the vast majority of classes across the university, resulting in fewer course offerings. The union’s two percent contractual pay raises, money that CUNY members were counting on, have been postponed indefinitely, and it is unclear if future pay raises will be honored. And worst of all, we have already lost thousands of part time faculty and staff jobs, and it is quite possible we may lose even more, including tenured and tenure track faculty and staff, if nothing is done.

It is clear that we are in the fight of our lives at CUNY and the threats to the union and the university are very real. To defeat those threats, the PSC will need all the power we have, all the allies we can get, and all the forces we can acquire. Although the distribution of the vaccine is a ray of hope, as disaster capitalism sets in and budgets and services are cut across the board, there is little reason to believe that there will be any return to normal. The world we will have to live in and the university we will have to work in after this pandemic are being shaped now and will depend in large part upon what we, the students, faculty, and the broader working class, do and do not do in the coming months.

This is why preparing for a strike now, sooner rather than later, is so important. The PSC has not once taken a strike in its entire history, nor has it taken any kind of work action that would break or even challenge the NY State Taylor Law. And this lack of action has permanently weakened the union and the university. Our failure, our refusal even, to use the strike weapon has resulted in an accumulation of defeats without battles. When tuition was instituted at the university in 1976, effectively shutting the door to many students of color who had recently gained access to the senior colleges, our union did not strike. When open admissions were dismantled, our union did not strike. When our members were furloughed and laid off in the 1970’s and when our budgets were slashed year after year for decades, and even as a second hyper-exploited tier of faculty slowly became the majority, we did not strike. Even after going seven years without a contract, we did not strike or even take any kind of work action — not a day strike, not a walkout, not a single instance of work to rule. And every time we have deferred to use the power available to us, we have made ourselves that much weaker and our losses that much greater.

As we face what is probably the biggest challenge in our union’s history, it would be folly to make this same mistake again. This resolution and the strike committees that were formed to create it are just one of many steps toward building a union capable of changing the landscape of struggle for public sector workers in New York City and State. By linking up with students, other public sector unions, and the mass of the working class, whether currently employed or not, we can use this moment of crisis to rebuild a fighting labor movement. We can’t afford not to.