Kyle Rittenhouse is a murderer, a terrorist, and a white supremacist. And the U.S. “justice” system is protecting him. 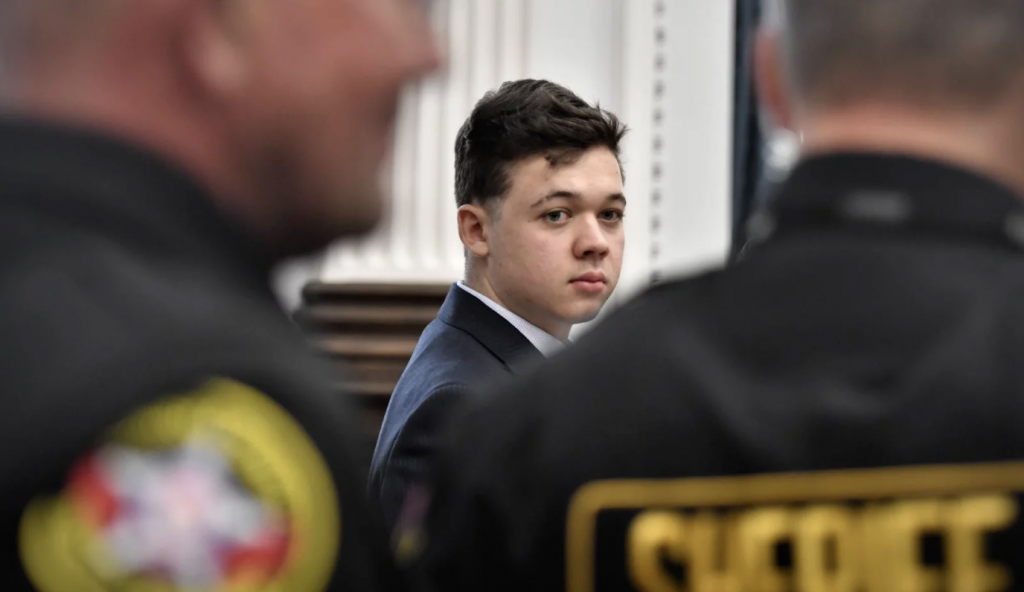 On August 25, 2021, Kyle Rittenhouse drove across state lines with an AR-15 semi-automatic rifle and killed two people. He then, carrying the murder weapon, walked past a police line as witnesses screamed that he was getting away, got back in his car, and drove home. All in a day’s work for the young Rittenhouse, a vocal member of the Blue Lives Matter “movement” who came to Kenosha, Wisconsin (a town and a state that he didn’t live in) with the express intention of using violence against Black Lives Matter protesters — framed, of course, as a “defense” of property.

Rittenhouse’s trial began on November 1 and it has quickly become clear that the worst assumptions of many activists are correct: the fix is in and the criminal “justice” system is clearly working to protect Rittenhouse. From the beginning, the trial has been completely weighted in Rittenhouse’s favor. The judge ruled that the people Rittenhouse shot cannot be referred to as victims but that it was all right to call them “looters” or “rioters.” In that ruling, the judge explicitly said that, while victim is a prejudicial and loaded word, “Let the evidence show what the evidence shows, that any or one of these people were engaged in arson, rioting or looting, then I’m not going to tell the defense they can’t call them that,”  The judge also ruled that Rittenhouse’s past statements about wanting to use an AR-15 to shoot “looters” weren’t relevant to the trial — a case in which Kyle Rittenhouse used an AR-15 to shoot people he claimed were looters.

These decisions from the judge meaningfully bias the trial proceedings in Rittenhouse’s favor. In the words of Elie Mystal, The Nation’s justice correspondent:

The (ahem) victims are not on trial. Rittenhouse is. Refusing to allow prosecutors to use linguistically accurate terms for people who did not voluntarily attempt to catch a bullet with their face at the same time as allowing the defense to use prejudicial language to characterize what those people were doing at the time is the very definition of bias. There is [not] and never will be a trial to determine whether Anthony Huber and Joseph Rosenbaum were arsonists, looters, or rioters, because Rittenhouse killed them in the street. Indeed, the sole surviving victim of Rittenhouse’s gunfire, Gaige Grosskreutz, has not been charged with rioting, looting, arson, or any crime whatsoever arising out of the protests in Kenosha.

The judge has also refused to allow a picture of Rittenhouse and the Proud Boys to be introduced into evidence, but has allowed footage of the police telling Rittenhouse that they “appreciate” him.

For his part, Rittenhouse is putting on a performance of being the good little white boy, who was just trying to do his best. Bizarrely claiming to have come to Kenosha with an AR-15 in order to be a street medic for the protesters, Rittenhouse is arguing that he acted in self-defense. He claims that his first victim threatened to kill him twice and was holding “a chain.” Rittenhouse then argues that he shot his second victim in self-defense after the second victim attacked him with a skateboard. A third man (ironically, an actual street medic) was injured after pulling his own gun on Rittenhouse in order to protect himself. Rittenhouse argues that he was protecting himself from a “mob.”

If the trial continues to go the way it is currently going, it seems likely that Rittenhouse may walk. This would be a colossal miscarriage of justice and proof positive, once again, of the white supremacist nature of the criminal “justice” system. The system is set up to defend and protect the ruling class and their defenders. This, in certain moments, can include members of the far-right who are able to act outside of the law in order to protect the status quo. If Rittenhouse walks, it’ll be a clear sign that, in the current moment, right-wing violence is acceptable in the eyes of the state, as long as it is done to protect private property. This will surely embolden the far-right and make protests more dangerous across the country.

Some will respond to this danger by arguing to rely even more on the institutions of the state. For example, after the events of January 6, many celebrated the FBI cracking down on the Capitol rioters. However, we should have no illusions about whose side the state and “justice” system is on. As the Rittenhouse trial shows, the courts and the police are more than happy to turn a blind eye to far-right violence. To take it a step further, any new tool that the state develops to use against the far-right will be applied against the Left with even greater force. Because the far-right is still somewhat acceptable to the state, while the Left isn’t acceptable at all. The cops, the courts, and Congress aren’t our friends.

Rather, we need to respond to these attacks with greater organization. We need to mobilize workers across the U.S. to defend these protests, both through street defense and through solidarity actions in workplaces. Right-wing violence, is an attempt to scare us out of the streets. But we cannot be scared. Instead, we must respond to these attacks with a call to every member of the working class and the specially oppressed to join us in the fight. They want to scare us but we have to come back in the streets stronger than ever. And if Rittenhouse walks, we need to organize mass mobilizations and work stoppages across the U.S.

Joseph Rosenbaum and Anthony Huber were made martyrs by Kyle Rittenhouse on August 25, 2020. Let us pay tribute to their legacies with our organization. Let us memorialize them by continuing the struggle. And let us avenge them by overthrowing the white supremacist system of capitalism and the police and courts who protect it.