“The Future Is Female” Is Not A Progressive Slogan

“The Future Is Female” is a corporate feminist slogan. It erases queer, trans, and other non-binary people entirely, and it implies erasing men, which is not feminist. 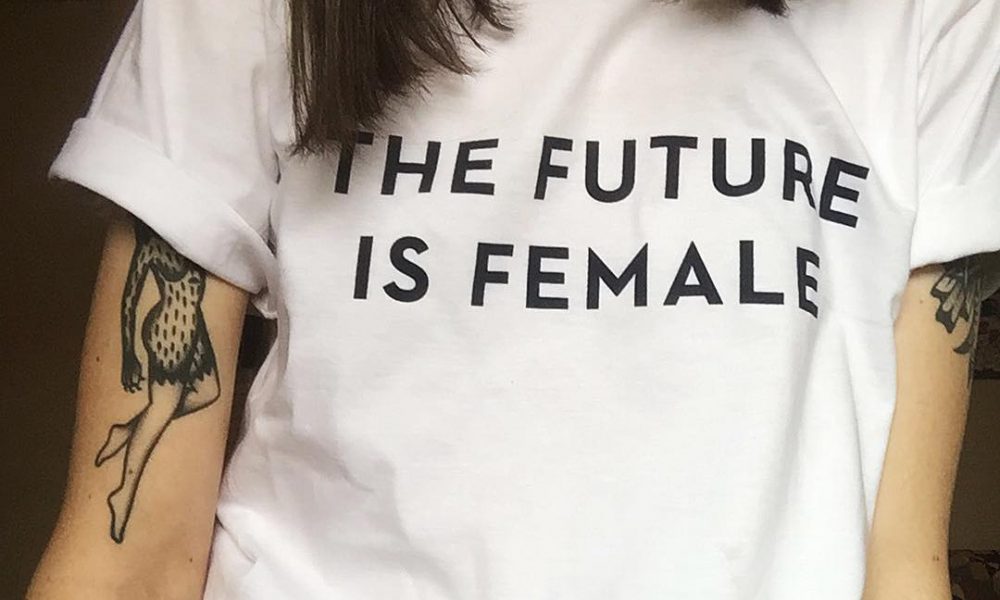 Image from The Hunt

The phrase has resurfaced in the past year with thousands of people proudly adopting it in light of the worldwide Women’s March. It was originally popularized in the 1970’s as a T-shirt design for Labyris Books, the first women’s bookstore in New York City. The idea behind the slogan was quite simple: Fight the patriarchy! Down with misogyny! These both sound great; historically, women have been economically, socially, sexually and intellectually oppressed by men. But while the intentions behind the slogan are well-meaning, the slogan itself is actually anti-feminist.

Feminism denounces all forms of sexism and structures of domination; feminism is anti-imperialist—in short, it is a commitment to egalitarianism. The word “female” is not merely used to describe a person’s biological sex, but is also widely understood as a way to describe one’s gender identity or orientation. One problem with “The Future Is Female” slogan is that it elides the distinction between sex and gender. Because of this, people who are pro-life or homophobic could endorse “The Future Is Female” without any apparent contradiction to their political views.

The slogan does not account for anyone who identifies outside of the “male vs. female” binary. To ontologize this binary as invariant to human nature is a problem: Those who identify as queer, trans or non-binary are not seen in this so-called Future.

The reification between male and female is heteronormative and it reinforces patriarchy. The inability to think beyond male and female limits our progressive politics. The left’s commitment to egalitarianism must affirm queer, trans and non-binary identities. Not only should the future be female; it should be queer, trans, non-binary, and male, too. Equally important is that our future is anti-capitalist.

Fighting patriarchy is not enough. Destroying patriarchy will only be successful if it is coupled with the fight to destroy capitalism. In other words, denouncing patriarchy while advocating a capitalist society will not actually help the majority of women and will certainly not help trans, queer and non-binary people.

“The Future Is Female” adopts a capitalist logic in a few ways. First, the slogan evokes an underlying idea of competition between men and women. The women will make a comeback, the phrase implies: They will claim power from the hands of men and use that power to assert themselves as the prominent people of the future.

And how can women go about procuring this future for themselves? Just Lean In! Corporate feminists are those who claim to be feminists, and yet they are complicit with capitalism, which ironically promotes sexism through competition among workers. This kind of feminism is more interested in competing with men than in liberating the working-class from capitalism.

Figures such as Sheryl Sandberg, Hillary Clinton, and Ivanka Trump are at the forefront of corporate feminism. For these women, female liberation can only come from women fully embracing capitalism by competing more intensely with men for top, high-paying jobs and greater power. In order to do this, women in business and politics must maintain a soft, tender caregiver image on the outside while being tough, brutal, and cut-throat on the inside to get to the top.

Hillary Clinton’s Wall Street-backed feminism is no help to working-class women. Her pro-abortion stance comes with the condition that it should be “rare”—and yet by supporting the 1996 Welfare Reform Law, Clinton is responsible for depriving poor parents of the financial support they would need to raise children. As Director of Wal-Mart, Clinton did nothing to stop Wal-Mart’s discrimination towards female employees; in fact, Wal-Mart was recently praised by the Clinton Foundation for its “efforts to empower girls and women.”

Sheryl Sandberg’s “Lean In” message completely ignores disadvantaged women. Sandberg argues that women should make individual changes in their lives which will allow them to climb the corporate ladder. What she fails to recognize is that once these women are in fact high on the corporate ladder, their corporate policies are making life harder for women at the bottom. There is nothing feminist about this. In fact, “Lean In” really amounts to: “Lean In if you are a middle-class woman with social capital who can aggressively work your way to the top of the corporate chain, at which point you can get rich by exploiting everyone else!” If you’re poor or working-class, Lean Out.

Ivanka Trump cares about “women’s issues.” Her forthcoming book, Women Who Work, will echo much of the corporate feminist jargon that Sandberg employs. She is a strong proponent of corporate-style feminism, coining the hashtag #WomenWhoWork as part of her brand campaign to promote female entrepreneurship. Ivanka has moved to Washington, DC, where she promises to fight for women as she assists her father Donald Trump in the White House. Ironically, Donald Trump and his team have just reversed abortion-related policy by presenting foreign nonprofits with a blunt choice: Stop providing abortions and stop providing any information about abortions or else you will lose money from the United States, the biggest global funder of family-planning services.

Corporate feminism endorses the future being female. “The Future Is Female” bolsters Lean-In feminism, which fails to challenge the realities of class society, specifically the relationship between bosses and workers. In corporate feminism, patriarchy celebrates its domination as female.

Sam Miller is a Guest Writer for Left Voice and is a recent graduate of Columbia University. She is currently a teacher in Manhattan.