Democratic and Republican politicians denounce the destruction of Black-owned businesses by “rioters” and “looters” protesting the murder of George Floyd. But they don’t really care. 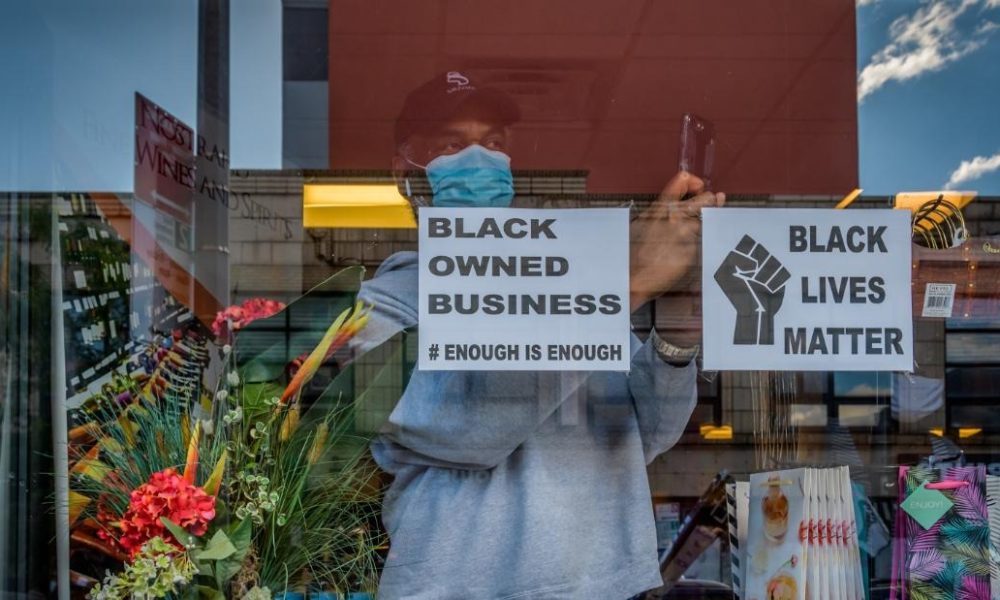 Newspapers, TV news broadcasts, and online sites are full of stories of stores being looted and set ablaze by rioters in the aftermath of the murder of George Floyd in Minneapolis. While most looting seems to be of large stores like Target and CVS, many of these reports make special mention of small “Black-owned businesses” that have been affected, as if Floyd’s race and the anti-racist focus of the protests should somehow make these businesses immune to what is happening in the streets.

Don’t be fooled by this coverage: The corporate media doesn’t care about Black-owned businesses any more than the capitalist government does. This news is a racist trope closely linked to another one.

Remember when football player Colin Kaepernick first took a knee in 2016 to protest police brutality inflicted upon communities of color? It wasn’t long afterward that some media outlets began to wonder why athletes weren’t protesting “black-on-black crime. Former New York City mayor Rudy Giuliani, in July 2016, famously said that before Blacks complain about police killing them, they need to “explain how and what they’re doing among themselves about the crime problem in the Black community.”

Whether it’s “they’re burning down their own communities” or “we have to focus on black-on-black crime,” these racist tropes are used to discredit uprisings that confront the police repression against the Black community like the Black Lives Matter movement. They have spewed from the mouths of capitalist politicians for decades. It’s a myth used to justify mass incarceration and aggressive policing. The message is this: Pay no attention to the repressive system under which Black folks are forced to live; they are their own worst enemy.

You never hear about “white-on-white crime,” even though white people murder other whites at almost the same rate as Blacks murder other blacks — as any truthful sociologist or criminologist will tell you.

These two tropes are linked both by their racist myth making and by how they are used to justify all manner of oppression and repression. Which leads us to some obvious questions: What is the situation of these Black-owned businesses? Before the Floyd murder, how were they faring in the economic crisis wrought by the Covid-19 pandemic? And in a country where owning a small business is celebrated by the rulers as a virtue, which factor matters most when it comes to being helped: being a business, or being Black?

In early April, the federal government instituted the Paycheck Protection Program (PPP) to provide loans as “a direct incentive for small businesses to keep their workers on the payroll.” Under the Program, the U.S. Small Business Administration “will forgive loans if all employees are kept on the payroll for eight weeks and the money is used for payroll, rent, mortgage interest, or utilities.” Applications went through established banks, which would then become the official lender of the U.S. Treasury money — meaning taxpayer money, since the federal government has no actual money of its own.

Sounds like a good deal, but all sorts of restrictions render the loans unforgivable, so lots of small businesses complained after they got the money. But Black-owned businesses didn’t even get that far.

Ashley Harrington, director of federal advocacy at the Center for Responsible Lending, told CBS News, “Based on how the program is structured, we estimate that upwards of 90% of businesses owned by people of color have been, or will likely be, shut out of the” PPP. That’s what. Her nonprofit group fights abusive lending practices.

Black-owned business never stood a chance. Once PPP was put in the hands of commercial banks, they were frozen out. Harrington explained that Black-owned businesses are less likely to have relationships with such banks, and those banks were only issuing loans to existing clients. This is structural racism at work.

Meanwhile, by the end of April, more than 100 publicly traded companies — that is, companies with access to capital in equity markets — had received $500 million of the funds officially intended for small businesses. The CARES Act, meanwhile, focused on bailing out giant corporations.

We shouldn’t expect anything different from the capitalists. They do nothing to help businesses in the Black community survive the pandemic — while at the same time allowing the coronavirus to run rampant through communities of color — and then shed crocodile tears over how “important” and “vital” these same businesses are to the neighborhoods they either neglect or send in brutalizing cops to suppress.

The Rhetoric of “Black Capitalism” to Destroy Black Communities

Paying lip service to Black-owned businesses has a storied history in the United States, most notably beginning in the late 1960s. In the 1968 presidential campaign, Republican candidate Richard Nixon ran with the promise of restoring “law and order” to a country that had been wracked by social unrest that year, ranging from the riots after the assassination of Martin Luther King, Jr. to the expanding movement against the Vietnam War and the giant demonstrations at the Democratic National Convention in Chicago that summer — what has come to be known as a “police riot.” The Black Panthers were active, too, and as radicalism grew in the Black community there was a backlash from right-wing whites. Nixon figured out how to channel that backlash into the Republican Party with what came to be known as the “Southern strategy.”

The Southern strategy had many elements, all of which were designed to use race as a wedge issue. Nixon became a master at the racist dog whistle, signaling his allegiance to white voters without coming across as explicitly racist to liberals. This included opposing overt forms of racial discrimination while at the same time opposing anything the government might do to overturn segregation.

One key element was the concept of “Black capitalism.” Quite masterfully, Nixon campaigned on a cynical version of “economic self-determination” for the Black community — something ripped right out of the rhetoric of the Black Power movement — but was actually signaling his intent to establish a segregated Black economy. It aimed at setting up another Jim Crow system predicated on the same “separate but equal” standard established by the Supreme Court in Plessy v. Ferguson (1896) — without anything remotely approximating “equal,” of course.

“People in the ghetto,” he said, “have to have more than an equal chance. They should be given a dividend.” He advocated “black enterprise” while pushing to dismantle the social safety net, especially welfare. At every juncture, he repeated this notion in response to demands for economic justice.

“People who own their own homes don’t burn their neighborhoods,” Nixon said. He got a lot of liberal activists in the Black communities to embrace this idea before beginning a systematic dismantling of programs that had been established in the previous administration’s “War on Poverty.”

This was not just a political strategy by one party to win the presidency, though, as its legacy makes clear. Mehrsa Baradaran explains in her book The Color of Money1 that it has paid dividends to the capitalist rulers and their political representatives ever since. Every subsequent administration, Republican and Democratic, has adopted the basic tenets and rhetoric of “Black capitalism:” from “enterprise zones” (also known as “empowerment zones”) to “niche banks” to “community capitalism.” Barack Obama spent a good portion of his presidency traveling around the country to help launch what he called “Promise Zones” in various cities, ostensibly to combat wealth inequality; however, these were usually just tax giveaways to businesses with little assurance that they would do anything to address the social and economic conditions faced by local residents.

Baradaran calls Black capitalism a “mirage” that does nothing to reduce inequality or increase prosperity. Instead, it has allowed the government to ignore these problems, because the politicians and their capitalist bosses can point to “Black entrepreneurs” as the solution — the good old American way.

Black politicians of the Democratic Party have been coming out in full force to claim they stand with the protesters but also to condemn the “rioting” and “looting” that is affecting Black-owned businesses. They reflect this wholehearted buy-in by the ruling class to the “Black capitalism” concept.

Atlanta Mayor Keisha Lance Bottoms, who has condemned the police killing of George Floyd, has also angrily denounced the destruction in her city. “You’re not honoring the legacy of Martin Luther King Jr. and the civil rights movement,” she said last Friday night in a news conference. “So when you burn down this city, you’re burning down our community.”

Bottoms failed to mention what King said in a 1967 speech at Stanford University.King condemned riots, but he also noted, “[I]n the final analysis, a riot is the language of the unheard. … And as long as America postpones justice, we stand in the position of having these recurrences of violence and riots over and over again.”

The solution? Dr. King again: “Social justice and progress are the absolute guarantors of riot prevention.” Not Black capitalism. Not mass incarceration. Not police crackdowns.

Black Small-Business Owners In Solidarity with the Protests

While Mayor Bottoms invokes King’s name at the same time as she focuses on property destruction and criticizing the protesters, many Black small business owners affected by the protests take a much different approach. Brandy Moore, owner of a south Minneapolis clothing store and recording studio, told USA Today on Sunday, “My business burned down two days ago. You see the flames? … That flame down in people’s soul? It’s still going. They want justice.” As saddened as she was to watch “nearly a decade of work collapse,” she said, “I can’t go home and cry and be hurt because I lost businesses. George Floyd lost his life. He’ll never be here again.”

Safia Munye, owner of Mama Safia’s Kitchen, also in south Minneapolis, looked at the rubble of her restaurant and told NPR, “My heart is broken. My mind is broken. I know I can’t come back from this. But this can be replaced. George’s life cannot. George’s life was more important. That man that got killed in the most inhumane way. I hope he gets justice.”

Kingston 11, a Jamaican restaurant in Oakland, California, so far hasn’t been touched. A beacon in the community since it first opened just a few years ago, it began by hiring young Black workers with no culinary experience, something upscale eateries rarely do. But Nigel Jones, chef-owner, put it squarely: “I don’t want my shit to be torn down, but if it happens, it happens,” he told Eater San Francisco. “The conversation should not be on looters and whether we should be protesting.”

Small Black-owned businesses like these — and the segregated Black economy Nixon encouraged — are certainly not the solution to the tremendous inequality suffered by Black people in the United States. That is a myth perpetuated by the capitalists. So remember the Jim Crow-style economic apartheid initiated by Nixon when you hear the bosses and the politicians crying over all the small Black-owned businesses being destroyed. They’re only upset that the system is taking a hit. What Rudy Giuliani said about protecting Black lives from “not just” the police will be a big part of the justification for the next wave of repression being planned in Washington.