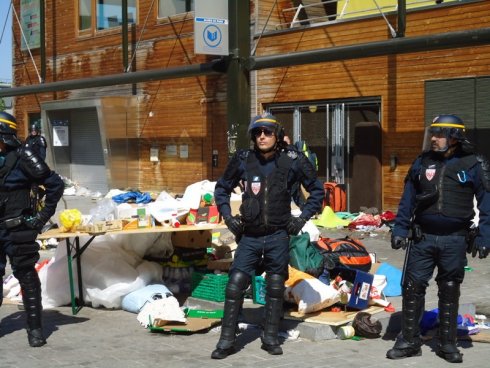 By Maria Chevtsova and Enea Rossi

A few days before, they had been thrown out of the Saint-Bernard Church, and somewhat earlier, from their improvised shanty under the elevated railroad of the La Chapelle subway station. Behind these expulsions? Neither Jacques Chirac, nor Charles Pasqua, nor Jean-Louis Debré: but Manuel Valls himself. The new line adopted at the Socialist Party’s (PS) Congress of Poitiers this past weekend is now being enforced with the bludgeon.

More than 300 people, including the neighborhood’s residents, political and community activists, local left-wing elected officials were present Monday afternoon to demonstrate their solidarity with the immigrants of Pajol and prevent an umpteenth expulsion that evidently would not solve any of the problems linked to immigration and precarious living conditions. Those who are being targeted today by the government have committed no crime other than to challenge the scared nature of the borders of nation states by fleeing violence, torture and massacres committed by murderous regimes, oftentimes in the service of European governments, or even wars waged by these same Western governments across the globe. What does the government hope to do by expelling the refugee camp of La Chapelle for a third time this week? Wear out the immigrants? Chase after the electors of the far-right National Front (FN)? Incarnate the new orientation of the PS?

Evacuation After Evacuation, the Authorities Refuse To Propose Solutions

It is not the first violent evacuation that these immigrants endure. The camp near the Pajol Road of the 18th arrondissement of the French capital is effectively the heritage of the “humanitarian” evacuation of the La Chapelle refugee camp on June 2nd. According to the declarations of the prefecture and the Mayor of Paris, a housing solution was allegedly found for all of the evacuated immigrants. But in reality, only a certain number of them were offered emergency accommodations by the SAMU Social of Paris, the municipal humanitarian emergency service. The rest decided to assemble together in front of the Saint-Bernard Church in order to continue their movement collectively.

Against the Ghosts of the Past

The Saint-Bernard Church is a highly symbolic site in the history of the struggle of undocumented workers in France. It is inside this very church that more than two-hundred men, women, and children, mostly from Mali, Senegal and Mauritania, found refuge in 1996. For two months, while Jacques Chirac was President and Alain Juppé Prime Minister, they occupied this place of worship in the La Chapelle neighborhood and demanded the regularization of their immigration status. After having spent another night in the church, one morning, they were putting away the mattresses and their belongings so that the church service could begin. Despite heavy pressure from the prefecture, the parish priest, Henri Coindé, refused time and time again to sign the evacuation request. By allying himself with the church’s occupiers, he was symbolically reviving the very roots of the right to asylum when this term meant a sacred and inviolable place.

On August 23, 1996, the political decision was however taken. Early in the morning, the CRS broke down the doors to the church, penetrated into the place of worship and launched tear gas on the refugees: it is by means of extreme police brutality that the occupation was finished off.

Twenty-years ago, it was Prime Minister Alain Juppé and Interior Minister Jean-Louis Debré who gave the political order to repress the movement of undocumented workers as to prevent it from getting stronger. Today, it is the socialist duo formed by Prime Minister Manuel Valls and Interior Minister Bernard Cazeneuve who are fighting against the resurgence of ghosts of the past. They have decided to evacuate the immigrants as to prevent a new occupation of the Saint-Bernard Church and a possible revival of the struggle of immigrants and undocumented workers.

A Sole Objective: Disperse the Immigrants and Hide the Shame

During the first evacuation of the shanty under the La Chapelle bridge, the prefecture’s goal was to sort the migrants: on one side refugees and those seeking asylum, on the other those who have no other status than that of undocumented worker. These methods can remind us of those used at the darkest times in French history.

On the other hand, the second evacuation’s main objective was simply to avoid a symbolic occupation of the Saint-Bernard Church, not far from the La Chapelle subway station, and to disperse the homeless immigrants from Soudan and Eritrea. A majority of them were forcibly moved to the subway. There were obliged by force, by groups of three or four, to take the metro in different directions, separating those who had built a certain network of solidarity in conditions of extreme insecurity. The message from the Prefecture and Mayor of Paris was simple: sleep where you wish, but do not stay together. The shanty of La Chapelle had shed light on the inefficiency of the city’s policy concerning the rehousing of the evacuated. Yet, naturally, it is easier to dissimulate than to find comprehensive solutions. Moreover, nothing is more simple for the Valls and the Mayor of Paris Anne Hidalgo than to show what they are capable of when it comes to “security” in order to siphon off conservative and far-right voters by adopting their program.

But for the refugees, sometimes extremely young, barely young adults, for these humans deprived of any right to human dignity, the very fact to stay together is also a question of survival: an isolated person is an invisible person. It is for this very reason that they decided to assembly in spite of police repression.

After Friday’s evacuation, a hundred refugees, now fugitives not only from their very country but also the French police, assembled before the Pajol Hall, a few hundred feet from the Saint-Bernard Church. They stayed there three days, sleeping on the ground, without mattresses or blankets. Meals were distributed by local associations and staple products were delivered by the neighborhood’s residents. Saturday afternoon, a delegation of 50 refugees joined the Parisian anti-fascist protest in tribute to Clément Méric, an 18-year old far-left activist assassinated by fascists in 2013. The two-thousand protestors welcomed them with open arms, chanting “solidarity with the refugees” and donating money to their cause.

On Monday, June 8th, once again, the immigrants were dispersed. The objective? Destroy their solidarity, limit the momentum of political and community activists, demonstrate, for the government, what the values of the Republic truly are. More than one-hundred and fifty CRS were sent to drive out seventy immigrants.

The demonstrators as well as elected officials from different left-wing parties formed a cordon around the immigrants in order to prevent them from being arrested by police. To the slogans of “Freedom, freedom”, “Solidarity with the refugees”, and “Valls, Petain, same combat”, the CRS responded with tear gas. To the immigrants’ banner demanding “housing for all”, the prefecture responded with the bludgeon. The human cordon was broken with violence, the refugees snatched up one by one and crammed into police cars heading towards the police station for some, immigration detention centers for others. Local residents gathered in front of the police station to demand that the immigrants be immediately released from custody. At eight o’clock in the evening, the refugees were liberated one by one.

May the June 9th Rally of Solidarity Be Massive and as United as Possible!

Just afterwards, the demonstrators at the rally decided to call for a new action on June 9th, at six o’clock in the evening at the Pajol Hall. Before such violence, it is impossible to stand idly by. The question of refugees is of prime importance in Europe as well as in France. We all know that Valls wished to distinguish himself from Brussels on the question of “quotas”. Today, he wants to distinguish himself not only from the right, but also the FN, by surpassing them… on the right! Allowing the government to intensify its war on refugees and immigrants means letting it advance on all the fronts where it has gone or hopes to go on the offensive. In this context, starting tomorrow, the solidarity with the refugees and the demands for a collective rehousing solution and immigration papers for all must be taken up by all the forces and organizations of the left, of the labor and youth movements, be they political or trade union, who refuse to support Holland and Valls’ Chirac-like policies.