The Housing Crisis Is Just Getting Started; Let’s Stop It

The real estate crisis poses a deep threat to New York City. New evictions, city budget shortfalls, and financial contagion could worsen an already intolerable situation. The Left should organize not only to ward off an eviction wave but to challenge the capitalist logic creating it. 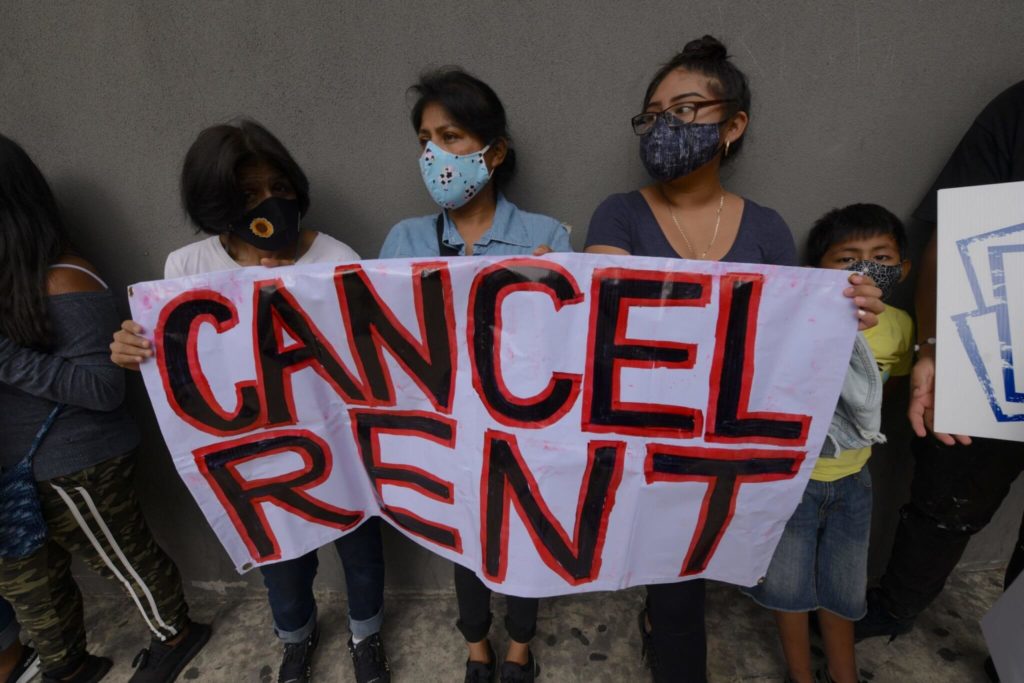 New York City is in the midst of a deep and likely worsening real estate crisis. This is playing out in a few ways with important political consequences. Changes because of coronavirus and inadequate government response have created severe and ongoing crises for working people but also enormous potential crises for city finances and for the financial system as a whole. How these interlocking crises interact involves many dangers but also some potential opportunities to challenge a callous social system.

The pandemic and the failure of a coordinated policy response at all levels of government is making the profound problems in housing in New York City much worse. With so many out of work or working fewer hours than before, huge chunks of the working class are finding it impossible to keep up with the city’s infamously high rents, with nearly one in five of all renters not paying rent in September. While the crisis continues, many parts of the already inadequate coronavirus relief package have ended for many, leaving working people to make rent out of meagre or non-existent savings that are quickly getting tapped out. Homelessness in the city is by some measures at its worst levels since the Great Depression and the potential for a massive spike in evictions could worsen an already untenably bad situation for tens of thousands of precarious people including the approximately 60,000 people who live in homeless shelters, the uncounted thousands more who sleep rough, and the 200,000 who already face eviction proceedings in court.

At the same time, the real estate crisis will massively impact New York City expenditures leading to a likely extraordinary budget shortfall. More than half of the city coffers come from real estate in the form of property and transaction taxes. With those revenues potentially cratering, a city that cannot borrow to cover costs could very well turn to a sudden and brutal austerity regime that could devastate public services. Even before the worst of the emergency has taken place, the city and the state have threatened to cut vital social services from a population that is lean from decades of attacks on the public sector. CUNY, public schools, sanitation, parks, the subway and other public services face cuts that would deeply affect the workers in those sectors as well as the whole of the population that relies upon them.

There is also a good chance for the real estate crisis to become a massive financial crunch with all sorts of sweeping effects. Indeed if, as many have alleged, NYC real estate was a bubble and if, as seems at least plausible, the pandemic has burst that bubble, then why haven’t we seen more financial fallout? Why aren’t large property holders cratering? Why aren’t the financial institutions that gave them loans not suffering meaningful financial consequences? Why hasn’t there been contagion? Why the hell does Wall Street seem fine? It seems possible that private capital reserves and some government intervention from both bailouts and access to the Fed’s cheap credit is holding off the worst of it—for now at least. But if this continues for too long and if smaller landlords default on their financial obligations, larger firms could find themselves holding worthless assets and the whole thing could come crumbling down.

The way these concurrent crises are interacting is really important. The fear of financial crisis and falling tax revenue could keep liberal governments from more fully dealing with the housing and eviction calamity. Both de Blasio and Cuomo depend on the revenue generated from the real estate sector and the whole financial system around real estate, from insurance to the mortgage industry to financial services. They also face intense lobbying from the Real Estate Board of New York and other landlord and industry groups who have been key contributors to many Democratic Party politicians. This makes them very unlikely to respond to the crisis in a way that would actually solve the problem for working people. With the potential that tens of thousands of people are about to be tossed into the streets, the governor could cancel rent but that might worsen financial contagion and threaten the state’s tax base. The easiest approach for officials who seek to maintain the financial system and the public purse that depends on it, is the one that they are taking: slow down evictions to delay and spread out the dispossession while making sure that any missed rent will have to be fully paid back eventually. In other words, the plan, as usual,  is to make the poorest pay for the crisis while sheltering finance capital from harm. The alternative of fully dealing with the housing crunch by cancelling rent and housing the homeless would require questioning capitalism and liberal politicians are not prepared to do that.

The precarious situation also means that mobilizations around housing have enormous radical potential. Because the city and the state simply cannot afford to cancel rent under current conditions, the demand is not just a simple reform but a threat to the whole system. Cancelling rent and providing housing for all those that need it would not only immediately alleviate the eviction onslaught but — given that a large proportion of working-class income goes straight to housing costs — would function as a stimulus for working people. Money set aside for rent could be used to buy other necessary goods and without the threat of eviction working people would be in a better position to leave unsafe working conditions. During a pandemic that has spread disproportionately among working people that cannot work from home, the change would save lives.

But as stated, the capitalist ruling class will not make this concession without enormous pressure. The left has the tools to apply that pressure. Already, without organization, much of NYC is withholding rent simply out of necessity. Organizers from the Crown Heights Tenant Union, the Metropolitan Council on Housing, and others have worked to link together individuals who are behind on rent into formal rent strikes that should be joined even by those who can make rent out of solidarity. Collectively tenant unions can gum up the eviction machine by blockading the courthouses, physically protecting people from dispossession by directly blocking evictions, and working together to ensure that people are safe. Labor unions should be a part of this mobilization, organizing their members to join in rent strikes and eviction defense networks, increasing political pressure on the ruling class and providing the protection of mass participation to those already striking. Labor unions should do this not only to improve the lives of their members, whose biggest expense is almost always housing, but to side with the wider working class. The goals should be to protect everyone, without exception, from losing their shelter while collectively refusing to convert unpaid rent into debt that would merely delay and spread out the eviction wave while handing landlords another way to discipline their tenants.

But because it threatens finance and government revenue, the Left has to be ready to fight for more than just the cancellation of rent and the housing of the homeless. The Left has to be ready to strike to fight any attempts to balance the budget through austerity, ready to confront police who would back eviction proceedings, and ready to block the ruling class from solving the crisis on the back of the working class. Ultimately, that means being ready to confront private property and capitalism directly through revolution, but one good place to start would be through rent strikes and the emerging mass movements to cancel rent and provide housing for all.