A union member from Iowa explains how labor law in his state drains public sector unions of their resources and energy by forcing them to vote on unionization all over again every two years. 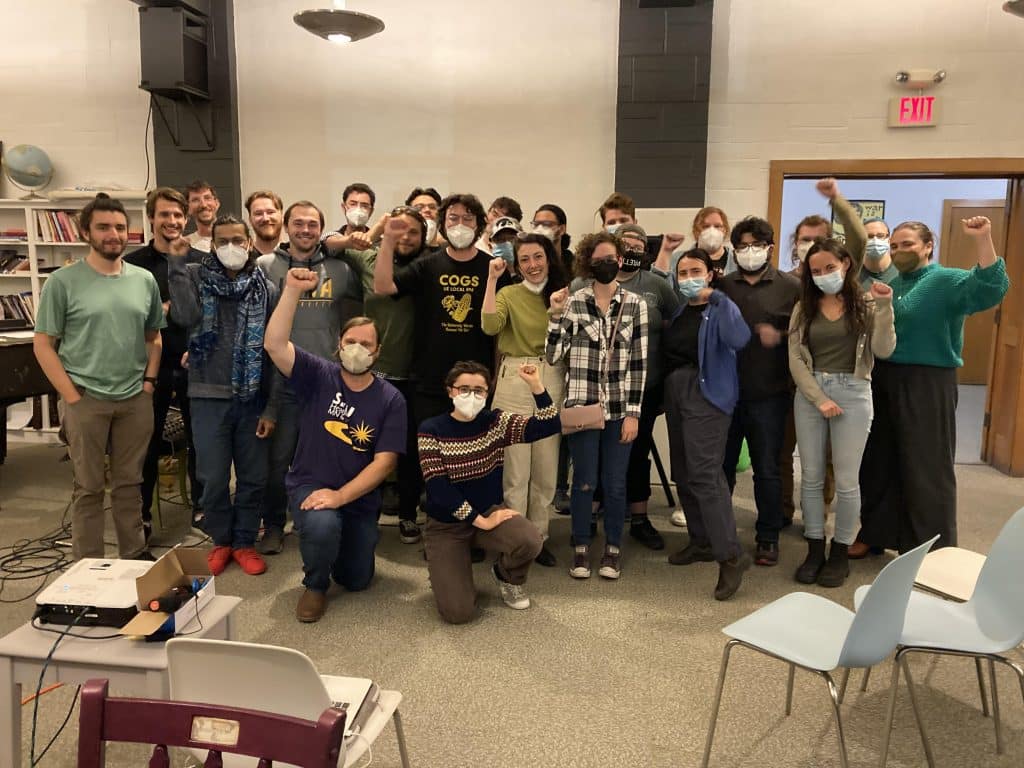 On a chilly Friday morning In Iowa City, a handful of graduate students and members of UE Local 896 enter their union office and prepare to call as many fellow workers as they can. Most calls go to voice mail, but those who answer will hear something like this: “Hi there, this is Caleb from our labor union. We’re just checking in with folks to see if you’ve had a chance to vote in our recertification election?” We briefly explain the importance of the election to those who don’t know. We need a majority of all 1,932 TAs and RAs, not just members, to vote yes to keep the union legally recognized. If you don’t vote, you are counted as a no against the union. And this is all because of a 2017 law change here in Iowa. Currently, we are in the second week of the recertification election process, and we’re not alone. On our campus alone SEIU nurses at the university hospital and AFSCME maintenance and custodians are also under the same pressure to recertify before October 25.

This is the third recertification I’ve seen since coming to Iowa six years ago. In the previous two elections, our union won by a huge margin — over 80 percent of grads voting and of those nearly 100 percent support for the union. These were clear wins for the union. But the victory still feels hollow. While other graduate unions are signing thousands of cards to launch their unions, we have to fight tooth and nail just to keep ours around every two years. Since forming in 1996, the Campaign to Organize Graduate Students (COGS) has made huge wins, including a livable stipend, tuition and fees coverage, and health insurance coverage. But big wins like these have largely been put on pause in recent years. What if we could put all that time and energy toward a campaign to improve wages and other issues on campus? Instead of playing defense just to keep things the same?

Iowa Code Chapter 20 is the name of the legal provision for collective-bargaining rights for public sector unions in our state. On the heels of several public school and university strikes, Republican governor Robert Gray signed Chapter 20 into law in 1974, officially establishing some collective-bargaining rights for public sector workers at the dire cost of making strikes illegal. In 2017, the Trump-affiliated Kim Reynolds administration used its super majority in the state legislature to pass significant changes to the law, including limiting the length of contracts to two years and mandating recertification elections for already-established public sector unions before beginning contract negotiations.

Today, Chapter 20 functions as union busting by other means. Instead of making collective bargaining illegal, the law pushes public sector unions like ours to the brink by stripping us of much of our power at the bargaining table and forcing onerous requirements like regular recertification on our members (which, by the way, the union has to pay for out of pocket to the tune of $2 a worker, just less than $4,000 this year alone). The 2017 amendment also made the previous dues-checkoff system illegal, forcing us to manage dues payments on our own, with the added impact of effectively purging our dues-paying membership overnight. (Iowa has been a “right-work-state” since 1947, meaning union membership is not mandatory for union benefits.) It isn’t hard to see the logic of Republican lawmakers who may hope unions like ours crumble under the weight of reduced membership and costly recertifications for years to come. Insidious recertification requirements pale in comparison to the devastating changes to the contract bargaining process itself. But under the new Chapter 20, the only “mandatory” bargaining topics are wages. This means hard-won union contract language over things like a grievance process, sick leave, and parental leave are now deemed “permissive,” but they are not required for employers to discuss at the table. Since 2017, the Iowa Board of Regents and the university have refused to negotiate over any permissive topics, stripping them from the contract in one fell swoop simply because they can (you can watch footage of the Regent’s lawyer making this case in the 2017 contract negotiations here). Other topics, most notably health insurance, are now illegal to bargain over at all. And what about those mandatory wages? Employers know they can lowball unions and wait them out because if both parties fail to reach an agreement, a provision in Chapter 20 grants an outside arbitrator the authority to make the binding decision to raise wages by 3 percent or by the regional consumer price index — whichever is less! As a result, in the last five years alone, we have gone from having one of the best graduate stipends to one of the worst among Big 10 peer institutions, by far the worst of any with a union.

The limits on the scope of our contracts, along with the time and energy devoted to recertification, often mean changing our strategies when it comes to other campaigns on campus. For instance, following the Dobbs decision and repeated assaults on abortion rights and trans youth in our state, COGS members jumped at the chance to join the Graduate Student Action Network’s Day of Student Action for Reproductive Justice and Bodliy Autonomy. But the date of the action fell a few days before our recertification election began. Since so many members were already involved in preparing for the recertification, this meant retooling our day of action to make the most of the reduced resources and people we had available. Even so, we co-hosted a successful resources fair alongside our local YDSA chapter and launched a petition with our own demands of the university. So far neither the University of Iowa nor the Board of Regents has responded to our demands. And while we still plan on including provisions as “permissive topics” in our contract proposal early next year, we expect we may have to focus future direct action on changing university policy if the Board of Regents refuses to discuss our demands at the bargaining table, where they belong.

By 11 a.m. last Friday, October 14, we had called an additional 200 grads. We then had to leave to teach, do our research, and attend class. But our members were back at it that night, working toward calling the other 1,000 voters we need to reach in the next 10 days. After we win our third recertification election in a row (fingers crossed), our next task will be to keep the momentum going into direct actions to push the Iowa Board of Regents to include permissives and a real pay raise in our contract negotiations.

If you live in Iowa and want to help public sector unions like ours, there is still much you can do before voting ends on October 25. Every unionized teacher, city worker, and yes, graduate student, can still use your help to reach our coworkers to vote. Contact locals in your area to see if you can volunteer to get the word out about the election. Follow unions like ours (UE Local 896) on social media, because we will need help from the public to pressure the University and Board of Regents to put permissive topics and a real pay raise into our next contract. Finally, be sure to vote in the upcoming midterm election, since ousting Governor Reynolds gives us a better shot at getting this awful law amended in working people’s favor this time around. Until the law is changed — or emboldened Republicans try to strip us of our collective-bargaining rights entirely — public sector unions like ours will keep fighting the best we can.