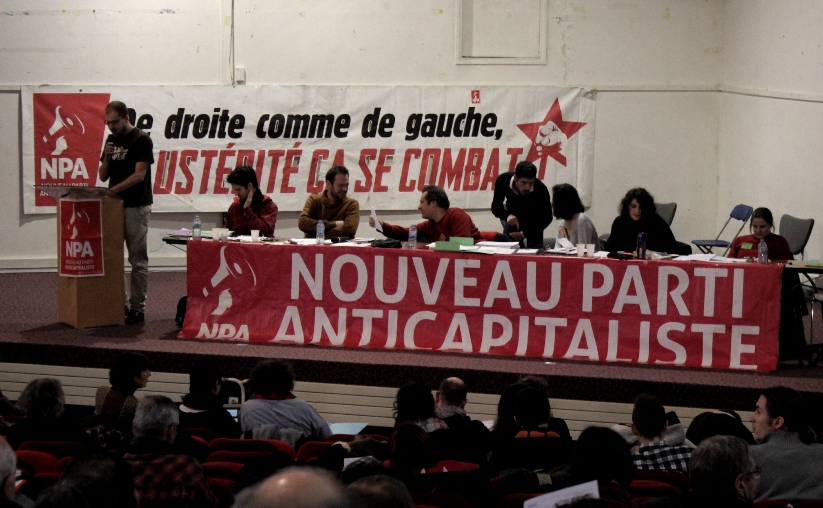 This article was originally published in French in Révolution Permanente

Platform A, which brings together different left tendencies within the Nouveau Parti anticapitaliste (NPA – New Anticapitalist Party), is well ahead of the other two platforms that have 29% and 24% of the vote respectively. This is a good sign for all those who want to see the NPA run an independent campaign for the presidential elections based on a revolutionary anti-capitalist programme. Here, we reproduce the declaration by Platform A published in the March 17, 2016 edition of the NPA’s weekly paper l’Anticapitaliste (Anticapitalist).

Declaration of Platform A

The preparatory meetings for the National Conference are a confirmation of the strong will of NPA militants to engage in the battle for an anticapitalist and revolutionary voice in the presidential campaign and present an NPA candidate. The positions defended by Platform A are reverberating within the Party (gaining more than 41% of the vote) and have helped to nurture political discussion by focusing on the struggle for the suspension of the El Khomri law* and the emergence of young workers within the various social and political struggles.

The increasing discontent and tension around the left government have provoked and encouraged a response from young people and the world of labor. All this gives even more strength to the argument for an anti-capitalist revolutionary candidacy.

We want this discontent, this anger and this sense of revolt to be expressed in the electoral field with the rejection and condemnation of the Valls-Hollande government and its politics of total submission to the employers and the banks. The right, which is becoming increasingly more extreme, and the far-right want to direct this popular discontent down the road of nationalist, xenophobic and racist demagoguery to ultimately arrive at and continue the exact same policies. In the end, these forces are all at the service of the ruling classes.

It is essential that the exploited classes are not only able to express themselves at the ballot box, but to also ensure that our campaign encourages the organization and the politics for all to resist and to fight for their rights.

Set against all the institutional parties that serve the bosses, we want to help workers and young people become their own political representatives, take their affairs into their own hands to enforce their rights, change the balance of power and become actors in the revolutionary transformation of society. To be able to meet this challenge, we must facilitate the means to gather all available forces both within and around the NPA to take advantage of the lessons of the last few months.

We know that the manoeuvres and tradeoffs that the core of the Parti Socialiste (PS – Socialist Party) hold dear will be of no benefit to the world of labor. Similarly with those from the left of the PS.

Mélenchon [of the reformist Front de Gauche (Left Front)] is a candidate for a program and ideas that are not situated in the terrain of workers. The PCF does not know which sauce to eat and with whom to eat it. All Front de Gauche deputies of Mélenchon voted in favor of the “State of Emergency” and the continuation of the war. (…)

The comrades of Platform C (the former majority of the NPA) can only be convinced that the only way to work for the emergence of a new political representation within the world of labor is to provide the NPA with the means to defend its own agenda and its own ideas. It is essential to move towards politics that are fully independent of the institutions and based on an anticapitalist, internationalist and revolutionary program.

The discussions at the National Conference must allow us to move forward to gather around the candidate that it seems we can reach consensus on, Philippe Poutou. But this candidacy must be a collective with a team of spokespeople – Armelle [Pertus], Christine [Poupin], Olivier [Besancenot] and Philippe – and have a campaign leadership with a proportional reflection of the different platforms.

Translation from Spanish by: Sean Robertson

* El Khomri law: anti-union laws named after Myriam El Khomri, the French Minister of Labour, that include the lengthening of the normal working week and the weakening of unfair dismissal protections.